Primary Energy: What Fraction Do We Use for Electricity Production?

Posted on October 22, 2019 by climatechangefork

Last week I looked at changes in electricity use (from 2000-2014), as a fraction of primary energy use, specifically as an early indicator of the energy transition to a more sustainable mix. I paid special attention to a group of 15 highly populous countries that fell into in three different wealth groups. Together, they comprise about 75% of the world’s population.

Here is a good explanation of the distinction between primary and secondary energy:

Primary energy consists of unconverted or original fuels. Secondary energy includes resources that have been converted or stored. For example, primary energy sources include petroleum, natural gas, coal, biomass, flowing water, wind, and solar radiation. Those are the fuels that can be mined, reaped, extracted, harvested, or harnessed directly. Secondary energy cannot be harnessed directly from nature; rather, secondary energy is energy that has already been converted. For example, electricity cannot be mined or harvested, though it is available in quick bursts on occasion from lightning. It is generated as a secondary form from primary fuels, like natural gas.

Figure 1, taken from the same source, shows the distinction in pictorial form. 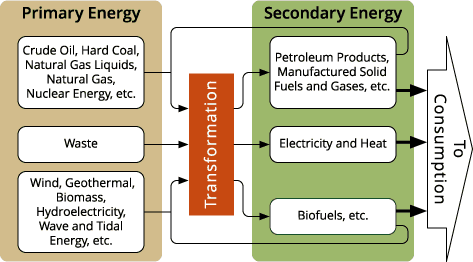 We found that in almost all cases over this period, electricity became a much larger application of energy use. One of the questions that immediately came to mind was how the total primary energy use has changed, over the same period of time, in these countries. This blog addresses both situations. The three graphs below use data from the World Bank to summarize changes in primary energy use over this time period, while the corresponding tables show the ratio of electricity/energy use as well as the primary energy use.

Burning primary energies such as oil, coal or natural gas, produces heat. We use this heat to drive turbines that produce electricity (secondary energy source). The 2nd law of thermodynamics in Physics prohibits this conversion process from running at 100% efficiency. The maximum efficiency of this process depends on the temperature of the heat. A commonly cited number is about 33%. (You can look at the different prices you pay for heating a room with electricity or natural gas, using the same amount of energy). 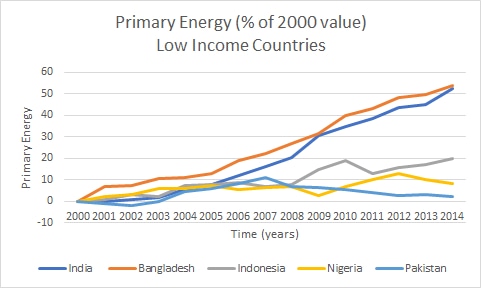 Figure 2 – Use of primary energy in low-income countries, as % of year 2000 value 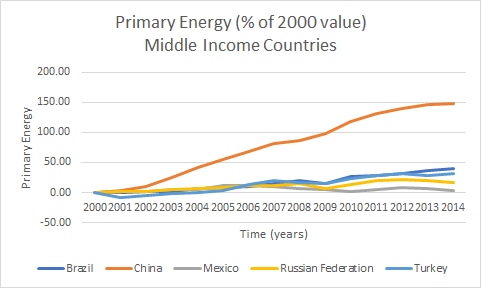 Figure 3 – Use of primary energy in middle-income countries, as % of year 2000 value 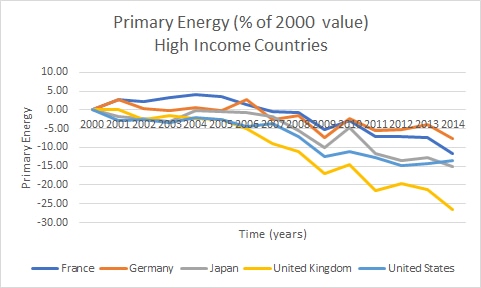 Figure 4 – Use of primary energy in high-income countries, as % of year 2000 value

In the next few blogs I will provide similar analyses regarding the use of coal and renewable energy sources. I will end this series by identifying the consequence of this transition, in terms of changes to the countries’ carbon footprints.

1 Response to Primary Energy: What Fraction Do We Use for Electricity Production?