The Shift to Electricity: Mitigation and Adaptation on a National Level

Posted on October 15, 2019 by climatechangefork

My last series of blogs concentrated on Germany’s energy transition. Since the country’s reunification in 1990, there has been a major increase in electricity and decrease in primary energy use, which paralleled a similar growth in sustainable energy sources such as wind and solar (photovoltaic). Additionally, Germany decided to stop using nuclear energy following the Fukushima nuclear disaster in 2011. More recently, the country also decided to stop the use of coal. All these steps are contributing to a major reduction in Germany’s carbon footprint. As always, there are winners and losers in this transition. As we have seen in France, if the losers are not compensated, they may cause trouble (see my blogs on the Gilets Jaunes).

This week I will start to expand this kind of analysis globally.

There are 193 sovereign countries in the world that are members of the United Nations, as well as two observer states (the Holy See and Palestine). These include countries of all sizes and economic statuses. Some choose their governments through general election processes; others are ruled by autocratic leaders. To make analysis feasible I will focus this series on 15 countries, divided into three groups based on the World Bank’s low-, median-, and high-income classifications. In each group, I have selected the five most populous countries. Together, these 15 countries constitute 75% of the world’s population.

When I discussed the German situation in previous blogs, I based the analysis on German reporting. My global analysis will use World Bank data, as I have done here repeatedly. The World Bank gets its data from individual countries, and then subjects them to intense scrutiny. This takes a long time. As a result, its data are often less up-to-date than the countries’ original reporting. Therefore, the latest data available for all 15 countries is from 2000-2014.

These are the important indicators in this study:

I have discussed some of these indicators in earlier blogs in somewhat different contexts and will surely return to them later. Other indicators are new here.

Unfortunately, the data for most of these indicators are not directly available for these countries within the given time frame. I cannot just cut and paste them. I would have to calculate them directly from the World Bank database.

Electricity intensity can signify electricity use per employee,  per GDP, per volume of data transmission, the ratio of retail electricity sales to commercial sector income or, probably the oldest definition, from physics:

Going back to our definition of electricity intensity, it invokes electricity use per unit of primary energy use. Both functions in the definition are extensive and depend on population, so their ratio becomes an intensive function, independent of population. This means we can directly compare countries of different sizes.

Figures 1 – 3 show the changes in electricity intensity for the three groups of countries. 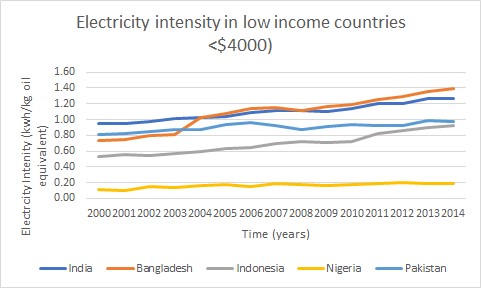 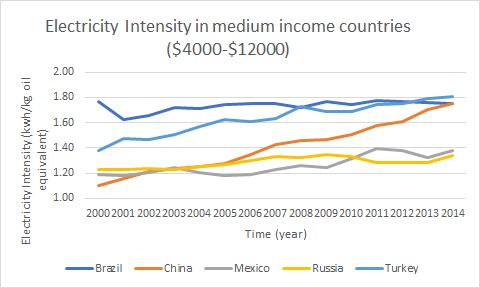 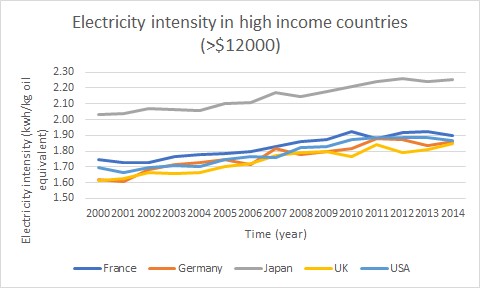 The units in the three graphs are kwh/kg oil equivalent, which is standard in the World Bank database. Conversion to more common units will not change the trends.

In almost all cases we see consistent increase in the electricity intensity, matching the trends we saw in the blogs regarding Germany. Figure 3 shows Germany’s changes are roughly equivalent to those of the other large rich countries; Japan is the only outlier, with a higher baseline but a similar growth pattern.

We need to remember, however, that a consistent increase in electricity intensity does not necessarily mean a lower carbon footprint. In Germany, we saw that the increase in electricity intensity came with decreased use of primary energy and more sustainable energy sources such as wind and solar that replenish the electrical grid. While this is a positive incidence, it is not necessarily the norm. The most recent data from the World Bank show that access to electricity in low-income countries stands around 70% for urban settings and 28% for rural settings. Any wealth increase will be reflected in changes to electricity intensity and low-income countries tend to want low cost energy sources—for now, those are still fossil fuels. I will, of course, cover these issues in future blogs.

13 Responses to The Shift to Electricity: Mitigation and Adaptation on a National Level