Posted on November 19, 2019 by climatechangefork

I have been following a set of fifteen countries over the past month (starting on October 15th). Together, they make up approximately 65% of the global population. I split them into three groups, based on income. The largest of these (in terms of population), which includes India, Indonesia, Pakistan, Bangladesh, and Nigeria, constitutes about 29% of the global population. I have used all fifteen countries in my analysis of the global energy transition and use of electricity but there are fundamental differences that relate directly to the countries’ wealth. 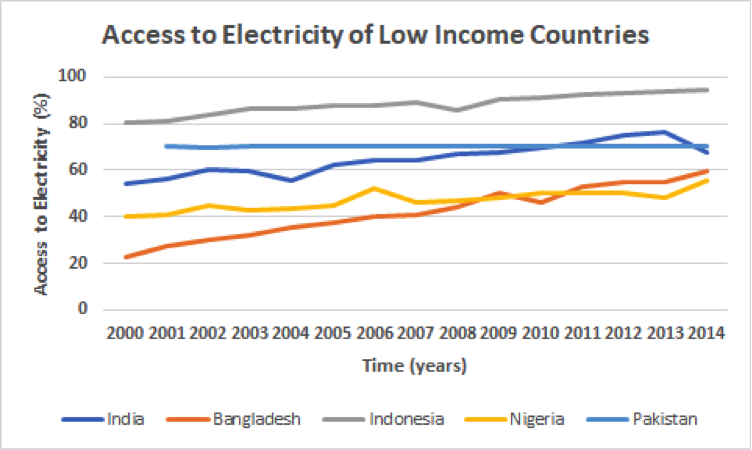 The shift to electricity in these countries did not come from environmental considerations or the discovery of new technologies. They simply realized that in the modern world, many things that we take for granted in a developed country are impossible without electricity.

More than ten years ago, I worked with a group of friends to film a society in a developing country as it transitioned from a mainly hunter-gatherer existence to an electricity-driven, modern civilization. The result was a series of short documentaries: “Quest for Light,” “Quest for Energy,” and “Beyond the Grid.” I wrote about these efforts in earlier blogs.

We tried to monitor this process through a documentary film; to accomplish this we needed some help but the result, along with the full list of contributors, can be seen in the short film, “Quest for Energy.”

The film illustrates the initial delivery of electricity in the small town of Gosaba. This delivery comes by way of a micro-grid that runs through some of the main streets in town. Here, the micro-grid doesn’t function as an additional, supplemental aspect of the main grid. In fact, since in this case, the micro-grid is the only grid, in a sense, it resembles the main grid in the US more than 100 years ago. The proliferation of micro-grids in rich countries is a boon to developing countries like India because it promotes further exploration and improvement of such technology. Hopefully these innovations will continue to be applicable not only in rich countries, where the micro-grids function mostly as a form of adaptation, but also in poor countries where in many regions they are the only game in town.

The most recent of these documentaries is “Beyond the Grid,” which came out in 2017. 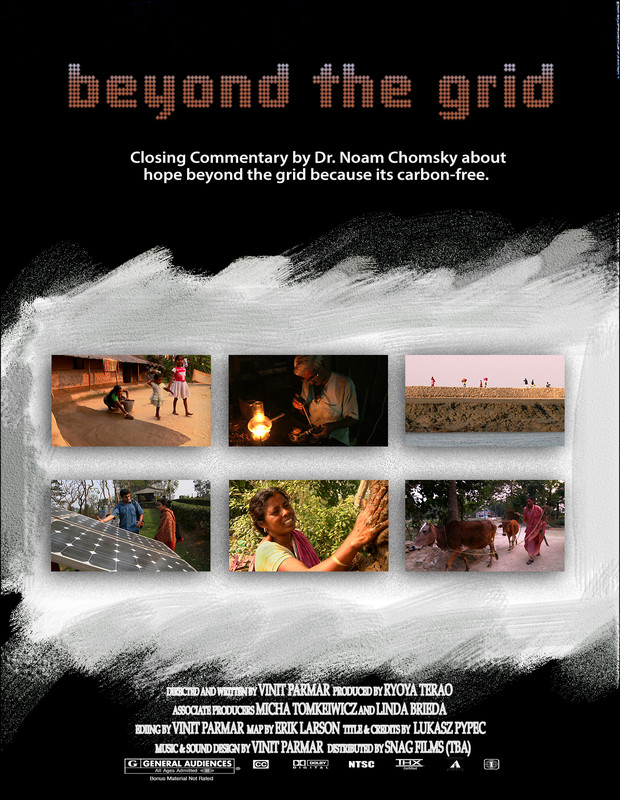 The area of the Sundarbans went through a rapid transition with the introduction of electricity, even though the mini-grid they created only covered the main streets of the town. The primary source of energy used to power the generators was wood, cut from the mangrove trees that grow in the forest nearby that bridges India and Bangladesh. The forest serves as a home to the few Bengal tigers that still exist in the area.

Fortunately, the local government was fully aware of the danger climate change poses to the region and how cutting these trees could accelerate climate change. I found it refreshing that the area’s politicians didn’t resort to the argument that I often hear in high-income countries—that they are just a small area with a negligible impact on the global climate. In an effort to make the practice more sustainable, the locals started weighing the wood before they burned it and planting new trees to replace those being used to make the electricity.

In technical terms, the wood is a traditional biomass. Traditional biomasses are especially important sources of energy in low-income countries because they tend to be cheaper and easier to gather than resources such as coal, natural gas, and oil. This particular use can be sustainable if the plants are annuals because they can use the carbon dioxide released to grow (powered by the photosynthetic process). Within a year, burning one plant releases the same amount of carbon dioxide that another can then absorb. Meanwhile, it produces energy, whose uses include cooking, heating or powering an electric generator. With forests, there can be a similar balance between capturing the carbon dioxide and releasing it through burning, but the cycle is longer and typically lasts closer to 20 years.

*It is important to note that this traditional setup is only sustainable if the plants grow in a fast enough cycle (in less than one generation) to capture all the carbon the burning produces.

Meanwhile, some developing countries are using a different cycle. Cows eat grass that grows photo-synthetically via the capture of carbon dioxide (the process of photosynthesis). Their digestion then releases whatever carbon the animal does not need for its own nutrition. From there, people have the option to convert the cow dung into gas (mostly methane), which can then be distributed for various uses such as cooking.

Figure 3, taken from a 2004 publication from the International Conference for Renewable Energies in Bonn, shows the global use of traditional biomasses as a function of the percentage of each country’s population that lives on a budget below $2US/day. Table 1, taken from the same source, shows the changes in the regional use of this type of biomass from 1971 to 2001. These changes reflect the countries’ economic development. 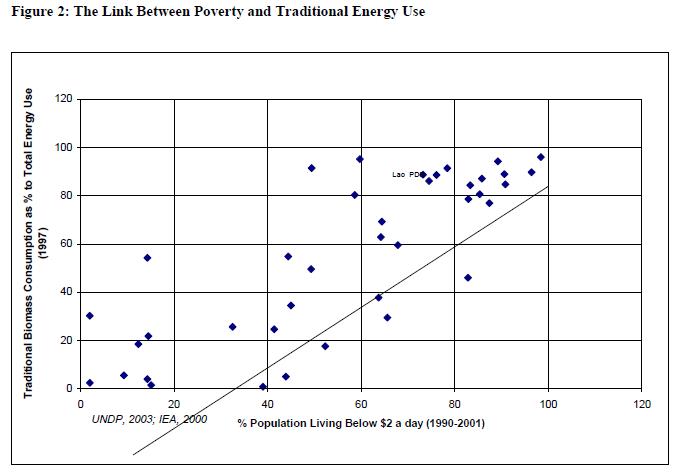 We can see that populations with lower incomes (in the right half of the graph) tend toward higher consumption of traditional biomasses.

With the exception of broader groupings of the OECD and Non-OECD Europe, the regions shown above have significantly lowered their reliance on biomasses as a primary energy source. This is indicative of their economic progress because it means that they now have the resources to seek out alternatives, whether those are fossil fuels or renewables.

This blog concludes my attempt to analyze the current situation and prospects of the global energy transition. I will return to my routine of writing on climate-related events that capture my interest.

2 Responses to Electricity in Developing Countries: Biomass and Availability