Propagation of Pandemics: Please Stay Inside!

Posted on April 14, 2020 by climatechangefork

Yesterday was the 75th anniversary of the day the 30th Infantry Division of the American army liberated me after two years of imprisonment in Bergen-Belsen. I was supposed to memorialize this event with my wife, other survivors and liberators, and their families. We would also have celebrated with our many German friends who worked very hard to make the event possible. Instead, almost all of us are staying home, imprisoned by coronavirus lockdown orders. It is spring both in the US and Germany, with beautiful weather that seems to invite us to spend as much time as possible outside. Here is an imaginary picture of what we are missing.

Earlier this month, an Israeli friend shared this picture with me on Facebook. It’s a powerful visual. The rhetorical question says it all. 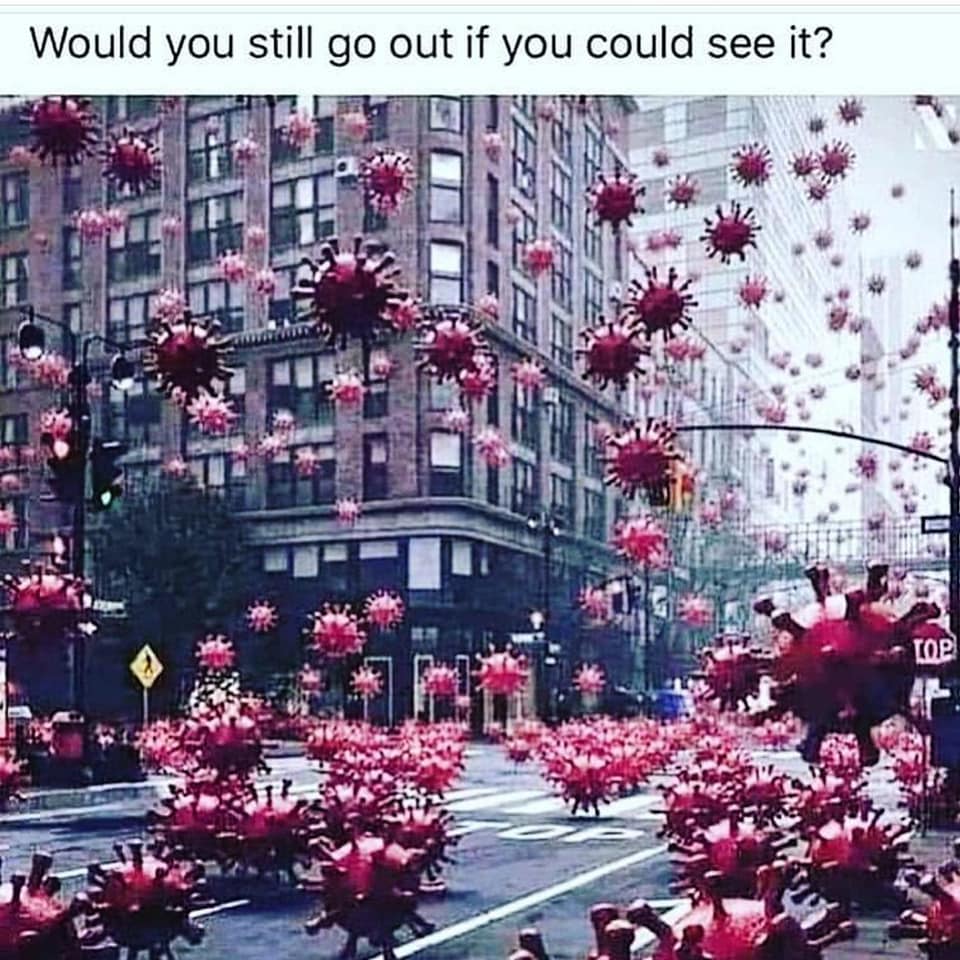 The picture itself is obviously somewhat of an exaggeration but like most good science fiction, it includes a seed of reality to help us change the way we view the real world. It imagines a world where the coronavirus is clearly visible. We can estimate the magnification: The novel (new) coronavirus (SARS-CoV-2) has an approximate size of 50 nanometers (1nm = one billionth of a meter). The size of the frightening objects above appears to be approximately half a floor. Given that the average floor height is approximately 14ft (4.2 meters), the picture magnifies our virus approximately 100 million times.

If the virus were this big, the danger would be obvious. Knowing the harm that being hit by one of these viruses could cause, we would be especially wary to go outside. Of course, (as is currently the case), homeless people and people in general who cannot participate in such a lockdown would be the first to suffer. What is not obvious in the picture is that once the virus hits us it multiplies, generating within our bodies and spreading an avalanche of chain reactions. The chain-reaction mechanism is similar to exponential growth or a positive feedback amplification of impact. The more viruses are around, the higher the probability that all of us will be directly affected. Thus the current pandemic.

Epidemiologists have a professional term for the impact of such a chain reaction – “R0.” The R0 factor (see below) is the average number of individuals that are impacted in a given situation. If the R0 factor is larger than 1 we get amplification of the virus. As a result, for a given concentration of targets (humans), the R0 factor will increase. The R0 factors for some recent viral attacks are shown below.

You can clearly see that the claim that coronavirus is the same as the common flu is a fallacy.

All the R0 factors in Table 1 have a range. The range is determined by a few additional properties.

First: as I mentioned last week, viruses have a finite lifetime. If we could institute a complete lockdown where the streets above could stay completely empty of carriers, the R0 would eventually reduce to zero, the virus would die, and the pandemic would be over.

But humans are not the only possible carriers. The original SARS-CoV-2 (the cause of COVID-19) virus is now associated with bats and scientists have already found an infected tiger and cats (dogs seem somewhat less susceptible). In other words, even if we could empty our streets of humans, if they were instead full of roaming tigers, the R0 would still be above zero until they were all gone.

Of course, viruses don’t have the terrain to themselves. All of us carriers have evolved with immune systems to fight such malignant foreign objects. When a virus tries to invade, our immune system creates antibodies that fight back. Things can get a bit complicated. Every carrier that is infected with a virus is locked in a deadly struggle. If the virus wins, its spread escalates unhindered, increasing the R0 factor and infecting more people. If the antibodies win and a carrier recovers, the antibodies stay with him or her and (theoretically) prevent reinfection. However, we still have no idea how long these newly created antibodies stick around—do they make the carrier immune to further attacks or is the protection short-lived? Initial results show that some recovered carriers can be infected again. Clearly, it will be a while before we can declare victory against the virus.

Next week we will move from the virtual world to the real world during COVID-19. Next week will also bring Earth Day, my wife’s birthday, and the anniversary of this blog. I’ll try to make some connections.

Micha Tomkiewicz, Ph.D., is a professor of physics in the Department of Physics, Brooklyn College, the City University of New York. He is also a professor of physics and chemistry in the School for Graduate Studies of the City University of New York. In addition, he is the founding-director of the Environmental Studies Program at Brooklyn College as well as director of the Electrochemistry Institute at that same institution.
View all posts by climatechangefork →
This entry was posted in coronavirus and tagged antibody, carrier, cat, contagion, contagious, coronavirus, COVID 19, disease, dog, ebola, epidemic, epidemiologist, Exponential Growth, flu, infection, lockdown, measles, MERS, pandemic, polio, R0, reinfection, reproduction, SARS, smallpox, tiger, virus. Bookmark the permalink.

1 Response to Propagation of Pandemics: Please Stay Inside!