Posted on April 7, 2020 by climatechangefork

I started to address COVID-19 in my March 17th blog, a few days after my college and almost everything else around me closed to try to minimize infection. In the eight years that I have been writing this blog, I have focused on climate change and what we can do to minimize the existential global threat by the end of the century. Any global indicator that strongly contributes to climate change such as carbon emission, global population or wealth (measured in GDP/capita) has a doubling time between 1-2% (population: 1%; GDP/capita: 2%, carbon emissions/capita: 0-3%). As I explained (December 24, 2013), these indicators are all subject to exponential growth (mainly driven by population growth) that puts the doubling time at 70 years (I took 1% as the standard)—near the end of the century.

The doubling time of the current COVID-19 pandemic ranges between 3 days and a week in many locations.

Adjective – : occurring over a wide geographic area and affecting an exceptionally high proportion of the population pandemic malaria; the 1918 flu was pandemic and claimed millions of lives.

The word comes from ancient Greek for, “belonging to all people.” The World Health Organization (WHO) has classified COVID-19 as a pandemic, but how do they decide what constitutes an “exceptionally high proportion” of the population? The world population is more than 7.5 billion and the present number of known infected people is around one million.

I have wondered if climate change could also be classed as a pandemic but given that it is not itself a disease (although it is the root cause of many), it does not meet the definition.

During my (indefinite) anticipated home confinement, I plan to compare COVID-19 with future anticipated pandemics and see what we can learn from the current situation.

The most basic indicator of the COVID-19 pandemic is the global number of infected people with the novel coronavirus. The data in the map below is from about two weeks ago. Over that time, the reported number of cases worldwide more than quadrupled and it now exceeds one million. 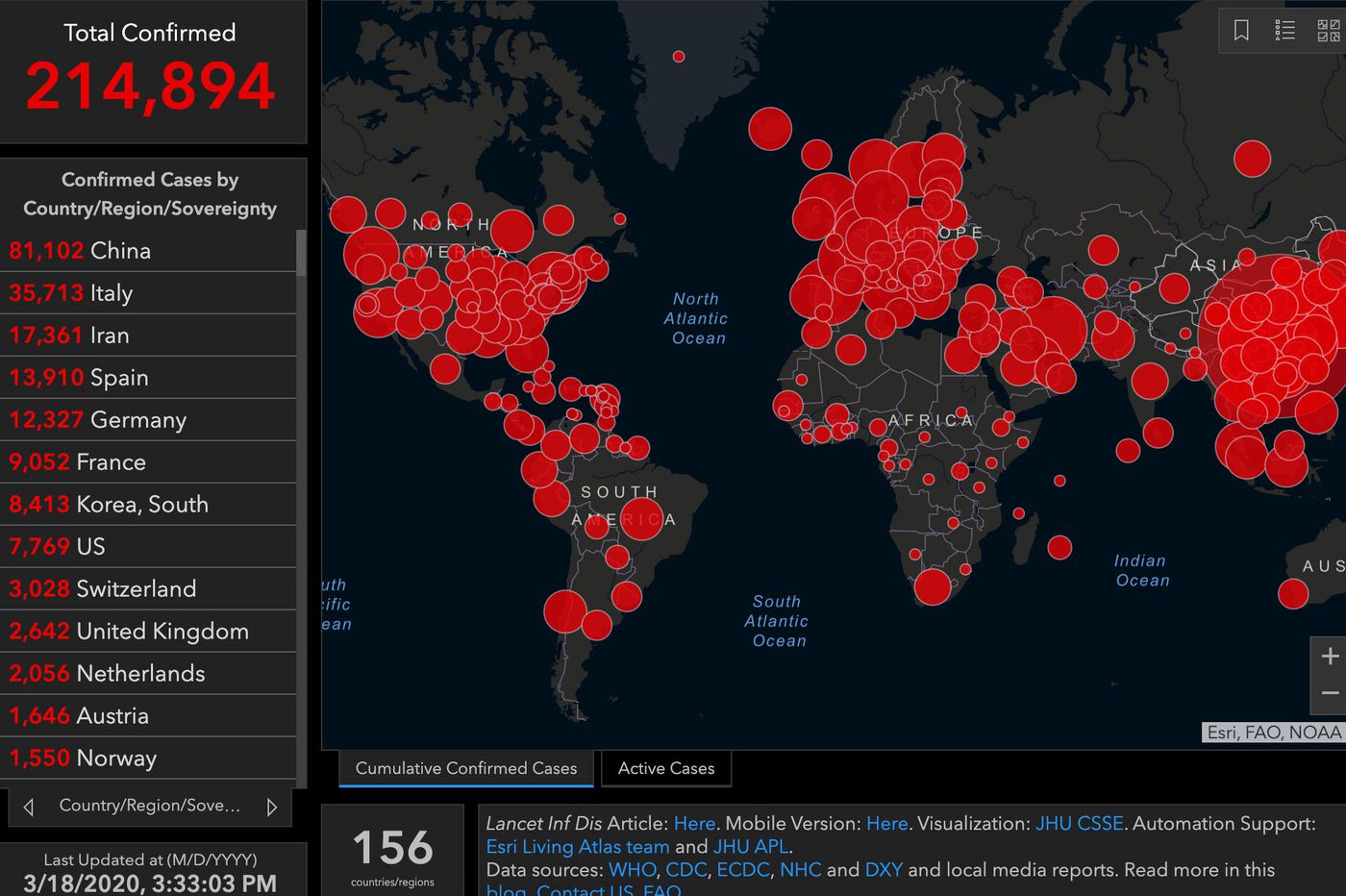 The global COVID-19 Pandemic, as of March 19th

While the official date for the end of social distancing policy in the US was initially Easter (April 12th), on March 30th, President Trump extended the timeline through end of April. We can likely thank the two most credible scientists in the Federal Coronavirus Task Force for this change. Dr. Debora Birx, the White House Coronavirus Response Coordinator, and Dr. Anthony S. Fauci, Director of the National Institute of Allergy and Infectious Diseases, wrote a critically important report:

President Trump and the physicians advising the federal pandemic response on Tuesday delivered a bleak outlook for the novel coronavirus’s spread across the country, predicting a best-case scenario of 100,000 to 240,000 fatalities in the United States and summoning all Americans to make additional sacrifices to slow the spread

Trump and his coronavirus task force members said that community mitigation practices in place for the past 15 days have worked and that extending them is essential. The mathematical modeling the White House presented suggests doing so could save hundreds of thousands of lives. Without community mitigation, the models predict, 1.5 million to 2.2 million Americans could die of covid-19, the disease the virus causes, though no time frames or other details were provided for the figures.

The scientists extrapolated the number of deaths from COVID-19 based on the progress in estimating the number of infections. The problem is that we still have no idea how many people are actually infected. I don’t know if I am infected and most likely, neither do most of you. One of the main reasons for this ignorance is that we don’t have tests to check everybody. We also know that a large fraction of the people that are infected don’t show any symptoms.

Attempts at controlled experiments to estimate untested, asymptomatic infections have produced a broad range of possible infected people: they found 25% to a factor of 10.

Given how contagious the virus is, the CDC has issued a strong recommendation that all people out in public should wear masks. The CDC has also repeated that individuals should only leave their homes for essential tasks—whether for basic, necessary supplies or as essential workers. At this point, given how many asymptomatic cases there are, a mask serves to protect others from you as much as or more than to protect you from others. If you sneeze, cough, or even just talk, the droplets can spread. A mask helps contain them. President Trump, in announcing this update, added that this is not a mandate but a recommendation, which he does not intend to follow.

Our understanding of the numbers doesn’t have to be this bad. There are global attempts to develop COVID-19 tests that are as abundant and available as pregnancy tests. There are also attempts for randomized blood tests for antibodies to COVID-19 that develop in people that have rebounded from the infection. Properly randomized, such tests can give us information on how many people were infected. But we can have a decent global picture of how many people are infected and might be acting as carriers without needing to test everybody. We are actually doing something similar on a regular basis with election results. Some of the recent presidential primary results in early March were declared minutes after the polls were closed. This was done mostly through exit polls.

Following similar methodology, we need to test groups of people that are representative of a specific collective. We can focus on known hot spots such as homeless shelters, nursing homes, and religious centers that refuse to move services online. On a broader scale, we can look at states that refuse to enforce social distancing or countries whose governments lack the discipline to enforce social distancing. Credible exit polls always come with error margins of 3-5%. But these margins are much better than the present uncertainty of infections, with margins up to a factor of 10 (30-50%).

Once we have the information about infected individuals, we can much more reliably calculate derivative parameters such as hospitalization, death rate, and recovery and try to devise specific policies to address these situations. Early attempts at such location-specific targeting are already taking place in some countries. I will expand on these aspects in the next blog.

The parallel indicator in climate change is attribution (January 23 & 30, 2018; October 3, 2017). It requires tools to distinguish between “natural” climate fluctuations and anthropogenic ones that can be associated with man-made climate change. One basic difference between climate change and viral pandemics such as COVID-19 is that the latter have apexes after which they decline. I’ll be discussing this bell-shaped curve in more detail next week.

Climate change impact doesn’t necessarily have an apex. It can continue to grow indefinitely, transforming Earth to an uninhabitable wasteland. As far as we know there’s still no other planet in the universe that supports life.

The very fast nature of pandemics necessitates timely remediation such as vaccines, treatments, or short of these two, social distancing to slow down transmission. We also need tests that can be administered and processed quickly. This sort of rapid response is impossible with slow moving (by human scale) disasters such as climate change. As we are seeing, energy transition away from fossil fuels can take a long time. We are all struggling with the consequences.

Micha Tomkiewicz, Ph.D., is a professor of physics in the Department of Physics, Brooklyn College, the City University of New York. He is also a professor of physics and chemistry in the School for Graduate Studies of the City University of New York. In addition, he is the founding-director of the Environmental Studies Program at Brooklyn College as well as director of the Electrochemistry Institute at that same institution.
View all posts by climatechangefork →
This entry was posted in Climate Change and tagged Adaptation, apex, asymptomatic, attribution, CDC, Climate Change, contagion, contagious, coronavirus, COVID 19, definition, Election, exit poll, Government, indicator, infection, mask, mitigate, Mitigation, pandemic, representative, social distance, symptom, test, viral. Bookmark the permalink.