Posted on September 1, 2020 by climatechangefork

About a month ago (August 4th), I wrote a blog that used a Venn diagram to show the overlap of climate change, COVID-19, projected population change, job availability, and socio-economic status. My discussion was relatively abstract. Now, only one month later, so many worrisome things are overlapping at once that apocalyptic fears are widespread. 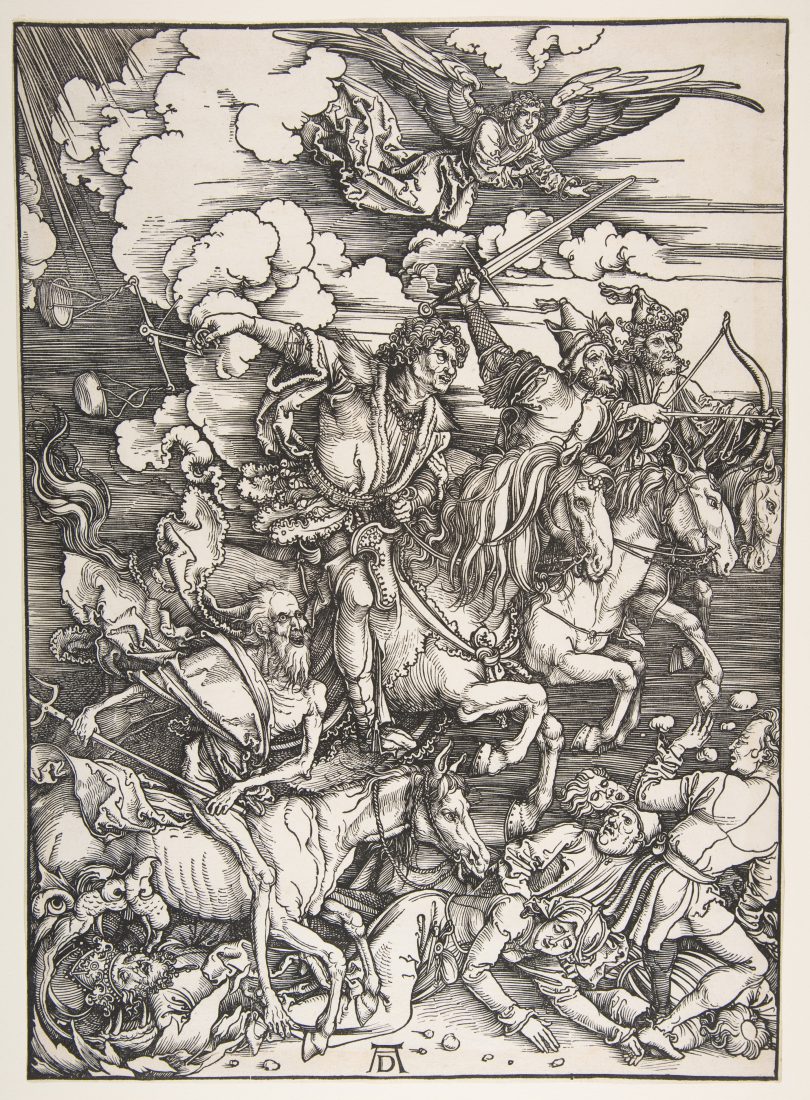 Albrecht Dürer’s The Four Horsemen of the Apocalypse (1498)

Albrecht Dürer’s powerful woodcut from the end of the 15th century illustrates the four horsemen of the apocalypse (Death, Famine, War, and Plague). The concept of the apocalypse runs through the writing of Judaism, Christianity, and Islam. In many of these manifestations, it symbolizes God’s punishment for humanity’s sins. Many are living under the impression that this judgement is now upon us.

However, for those of us who are trying to view the world through the eyes of science rather than religion, perhaps a more fitting image would be humanity astride a horse that represents the physical environment. We are riding toward extinction. This vision is perhaps even more frightening than Dürer’s because we are the ones in control. We know where we are going and we know what we have to do to change direction; we just refuse to do so.

The concept of humanity steering the physical environment is what we call the Anthropocene. Humans have had a huge impact on Earth’s geology and ecosystems and our contributions such as anthropogenic (human-caused) climate change define the time period. Scientists have posited it as a geological epoch (like the Triassic or Jurassic) for over two generations. The Anthropocene is one of the main concepts that drove me to start this blog. You can type the term into the search box for more information or visit Wikipedia for a summary of where we stand in the context of the Anthropocene.

Meanwhile, some of the disasters that were still abstract a month ago are now showing up in concrete form:

Tropical storm Marco raced hurricane Laura to the coastline near the Texas-Louisiana border. While the former made a smaller impact than at first feared, Laura landed as category 4 hurricane, then moved northeast. It left more than 20 dead and tens of thousands in the Gulf Coast and Puerto Rico without power or running water. We are now approaching the peak of a hurricane season that looks to be unusually busy—and people are understandably concerned, especially since this region is also a COVID-19 hot spot.

Meanwhile, heat waves almost everywhere have intensified, even as most of us are still in lockdown because of the pandemic. If you don’t have air conditioning to adjust the indoor temperature you are in serious trouble. New York City has started to offer older New Yorkers free air conditioners but many are still waiting.

Even among those of us lucky enough to have air conditioners, there are problems. Namely, too many of us are running them at the same time. This happened in California and the resulting surge in electricity usage was too much for the grid to handle. Millions experienced blackouts at a time when most of our activities—whether professional or recreational—require electrical power. In California, almost immediately after the blackout, massive fires engulfed the state, costing many lives and large swaths of property.

As if all of this were not enough, a small asteroid is on its way towards Earth, scheduled to reach us (there’s a less than 0.5% probability that it will hit) just a day or two before the US presidential election.

Aside from the coronavirus and the asteroid, we still have all of the disasters generated by our continued contributions to climate change. On top of all this, we also have abundant social and political disasters. For instance, the Kenosha and Minneapolis police’s deadly violence against unarmed black citizens in the US are triggering desperate demonstrations throughout the world, as are crackdowns in autocratic regimes such as Belarus.

“We shall overcome,” has long been a hopeful refrain. I hope that we can do this in the upcoming elections. This November 3rd might be the ultimate test in the US. Not only do we need to stem our contributions to climate change, we must do the same with our input to social injustice. We need policies to help achieve these goals and take better control of the reins.