Job and the Just World Hypothesis

Posted on December 15, 2020 by climatechangefork

I asked my wife, a psychologist and college administrator, to help explain climate change denial. She suggested the “just world hypothesis.” I included her proposal in the last chapter of my book, Climate Change: The Fork at the End of Now:

My wife, an experimental psychologist and now the dean of research at my college, pointed out that social psychology has a possible explanation for inaction in the face of dire threats, mediated by a strong need to believe that we live in a “just world,” a belief deeply held by many individuals that the world is a rational, predictable, and just place. The “just world” hypothesis also posits that people believe that beneficiaries deserve their benefits and victims their suffering. The “just world” concept has some similarity to rational choice theory, which underlies current analysis of microeconomics and other social behavior. Rationality in this context is the result of balancing costs and benefits to maximize personal advantage. It underlies much of economic modeling, including that of stock markets, where it goes by the name “efficient market hypothesis,” which states that the existing share price incorporates and reflects all relevant information. The need for such frameworks emerges from attempts to make the social sciences behave like physical sciences with good predictive powers. Physics is not much different. A branch of physics called statistical mechanics, which is responsible for most of the principles discussed in Chapter 5 (conservation of energy, entropy, etc.), incorporates the basic premise that if nature has many options for action and we do not have any reason to prefer one option over another, then we assume that the probability of taking any action is equal to the probability of taking any other. For large systems, this assumption works beautifully and enables us to predict macroscopic phenomena to a high degree of accuracy. In economics, a growing area of research is dedicated to the study of exceptions to the rational choice theory, which has shown that humans are not very rational creatures.  This area, behavioral economics, includes major contributions by psychologists.

The book was published nine years ago but my feelings about the hypothesis haven’t changed over this time. The “just world hypothesis” is not science, nor is it rational. It is based in religion and cannot be refuted. By those standards, it hardly qualifies as a hypothesis. Here’s how Wikipedia describes the idea:

The just-world fallacy or just-world hypothesis is the cognitive bias that a person’s actions are inherently inclined to bring morally fair and fitting consequences to that person; thus, it is the assumption that all noble actions are eventually rewarded and all evil actions eventually punished. In other words, the just-world hypothesis is the tendency to attribute consequences to—or expected consequences as the result of—a universal force that restores moral balance. This belief generally implies the existence of cosmic justice, destiny, divine providence, desert, stability, and/or order, and is often associated with a variety of fundamental fallacies, especially in regard to rationalizing people’s suffering on the grounds that they “deserve” it.

The hypothesis popularly appears in the English language in various figures of speech that imply guaranteed negative reprisal, such as: “you got what was coming to you”, “what goes around comes around”, “chickens come home to roost”, “everything happens for a reason”, and “you reap what you sow”. This hypothesis has been widely studied by social psychologists since Melvin J. Lerner conducted seminal work on the belief in a just world in the early 1960s.[1] Research has continued since then, examining the predictive capacity of the hypothesis in various situations and across cultures, and clarifying and expanding the theoretical understandings of just-world beliefs.[2]

This pandemic has forced us to change almost everything about the way we live our lives. This includes entertainment. My wife and I saw an electronic event that aimed to put the Book of Job from the Old Testament into the context of present life. I grew up in Israel, so the Old Testament was a part of my education. The Book of Job was part of our high school curriculum. Its connection to the “just world hypothesis” has not escaped me.

The event described itself in this way:

The Book of Job Project presents dramatic readings by acclaimed actors of The Book of Job as a catalyst for powerful, guided conversations about the impact of the COVID-19 pandemic upon individuals, families, and communities. The Book of Job is an ancient Hebrew poem that timelessly explores how humans behave when faced with disaster, pestilence and injustice. 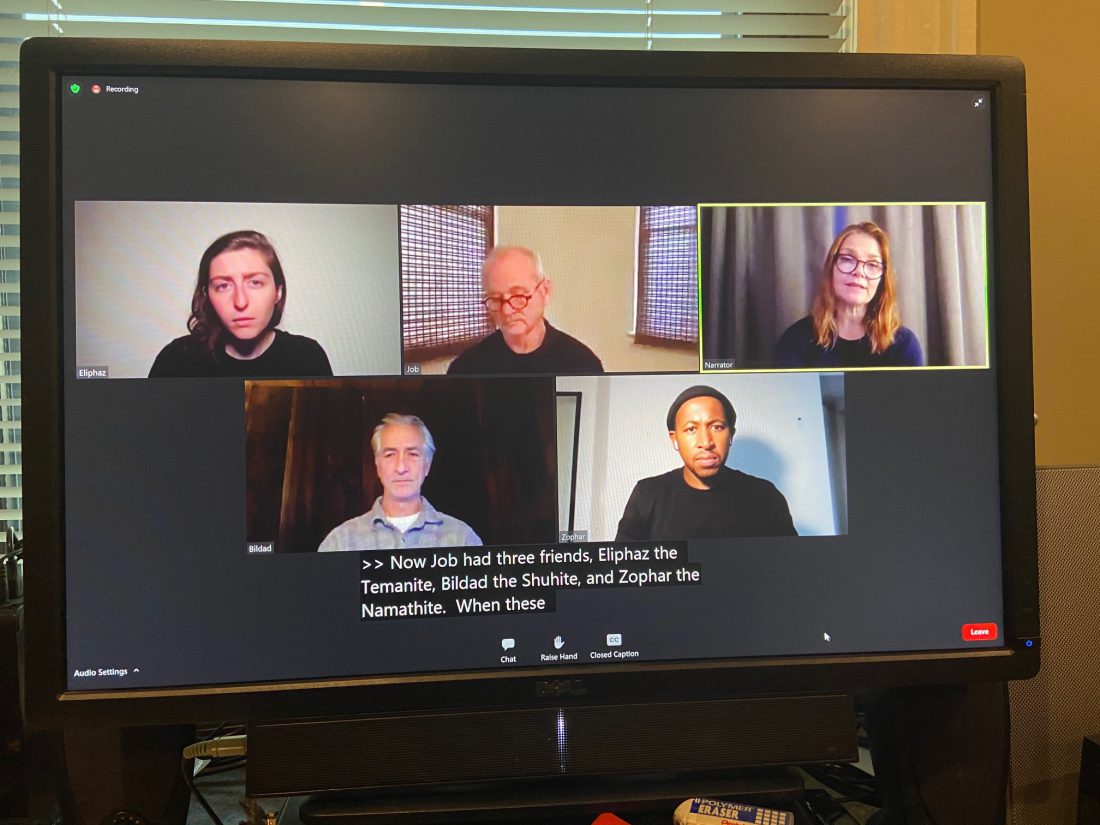 The event on Zoom

Those of you unfamiliar with the story can read the Wikipedia synopsis or read the full English text of the Book of Job via the Bible Project.

Here is part of Wikipedia’s summary:

The Book of Job (/dʒoʊb/; Hebrew: אִיּוֹב‎ – ʾIyyōḇ) is a book of the Hebrew Bible. It addresses the problem of theodicy, meaning why God permits evil in the world.[1] Job is a wealthy and God-fearing man with a comfortable life and a large family; God, having asked Satan (Hebrew: הַשָּׂטָן‎ – haśśāṭān, literally “the accuser”) for his opinion of Job’s piety, decides to take away Job’s wealth, family and material comforts, following Satan’s accusation that if Job were rendered penniless and without his family, he would turn away from God. The book is found in the Ketuvim (“Writings”) section of the Hebrew Bible (Tanakh), and is the first poetic book in the Old Testament of the Christian Bible.[2] Scholars are generally agreed that it was written between the 7th and 4th centuries BCE.[3]

The prologue on Earth introduces Job as a righteous man, blessed with wealth, sons, and daughters, who lives in the land of Uz. The scene shifts to Heaven, where God asks Satan (Hebrew: הַשָּׂטָן‎ – haśśāṭān, literally “the accuser”) for his opinion of Job’s piety. Satan accuses Job of being pious only because God has materially blessed him; if God were to take away everything that Job has, then he would surely curse God. God gives Satan permission to take Job’s wealth and kill his children and servants, but Job nonetheless praises God: “Naked I came from my mother’s womb, and naked shall I return there; the Lord gave, and the Lord has taken away; blessed be the name of the Lord.”[8] God allows Satan to afflict his body with boils. Job sits in ashes, and his wife prompts him to “curse God, and die”, but Job answers: “Shall we receive good from God and shall we not receive evil?”[9]

Job’s friends try to make the case for a “just world,” claiming that Job’s punishment is itself proof that he is not as pure as he claims to be. After all, God knows best. Job doesn’t initially argue with this claim or blame God for his misfortunes. He just wants to know where and how he actually sinned to deserve such tribulations. He later takes issue with his friends’ lack of empathy for his suffering and does rail against God for both his own troubles and those of the world around him. Nowhere in the story does God answer Job with a list of what he did wrong; instead, Job learns that he does not and cannot know enough to judge God’s decisions.

At the end of the reading, there was a panel discussion, followed by one with the general audience, an estimated 5,000 people globally. Only one of the comments (indirectly) referenced the “just world hypothesis” but many commented on our present suffering. Job questions, “Why me?” and many of the commenters echoed the woeful question. The moderator of the program tried to provide one possible answer to Job’s question, claiming that—judging by the period and Job’s wealth, Job was probably also a slave owner. Nobody else followed through with that line of thought. However, some posited that the main problem was that Job was too transactional when it came to sin.

Rep. Walberg subscribes to the belief that if climate change exists, it is something that God is inflicting and is therefore “just” (i.e., something we brought on ourselves). As with Job, God doesn’t have to answer to us.

Meanwhile, there have been over 70 million global cases of the coronavirus (US cases exceed 16 million). Worldwide, the total number of deaths directly associated with the virus has surpassed 1.6 million (in the US it exceeds 300 thousand). The numbers are growing exponentially, even as many religions are now approaching the most important family holidays. These are times when, traditionally, we travel to be with loved ones; it is likely that this strong draw will lead some to neglect even basic precautions that help to minimize the virus impact.

Micha Tomkiewicz, Ph.D., is a professor of physics in the Department of Physics, Brooklyn College, the City University of New York. He is also a professor of physics and chemistry in the School for Graduate Studies of the City University of New York. In addition, he is the founding-director of the Environmental Studies Program at Brooklyn College as well as director of the Electrochemistry Institute at that same institution.
View all posts by climatechangefork →
This entry was posted in Climate Change and tagged Bible, Climate Change, Climate Change Denial, climate change denier, climate denier, coronavirus, covid, COVID 19, faith, God, Hebrew, job, just world, morality, Old Testament, pandemic, psychology, rationality, religion, Satan, sin, social behavior, social distance, test, Tim Walberg. Bookmark the permalink.

1 Response to Job and the Just World Hypothesis