Posted on September 14, 2021 by climatechangefork

Last week’s blog was “inspired” by hurricane Ida and the damage that it wreaked on Louisiana, the rest of the Gulf Coast, and the northeastern US. I promised that I would expand on the theme of climate change-related extreme weather, including simultaneous floods and droughts around the world. Having discussed flooding, I’m moving on to the opposite side of the spectrum here.

As temperatures rise and the air becomes warmer, more moisture evaporates from land and water into the atmosphere. More moisture in the air generally means we can expect more rain and snow (called precipitation) and more heavy downpours. But this extra precipitation is not spread evenly around the globe, and some places might actually get less precipitation than they used to get. That’s because climate change causes shifts in air and ocean currents, which can change weather patterns.

There is a more quantitative “adult” description in an article in Nature that includes the figure below. This is the paper’s abstract:

The “dry gets drier, wet gets wetter” (DGDWGW) paradigm is widely accepted in global moisture change. However, Greve et al.1 have declared that this paradigm has been overestimated. This controversy leaves a large gap in the understanding of the evolution of water-related processes. Here, we examine the global moisture trends using satellite soil moisture for the past 35 years (1979–2013). Our results support those of Greve et al., although there are quantitative differences. Generally, approximately 30% of global land has experienced robust moisture trends (22.16% have become drier and 7.14% have become wetter). Only 15.12% of the land areas have followed the DGDWGW paradigm, whereas 7.77% have experienced the opposite trend. A new finding is that there is a significant “drier in dry, wetter in wet” (DIDWIW) trend paradigm; 52.69% of the drying trend occurred in arid regions and 48.34% of the wetter trend occurred in the humid regions. Overall, 51.63% of the trends followed the DIDWIW paradigm and 26.93% followed the opposite trend. We also identified the DGDWGW and DIDWIW paradigms in low precipitation-induced arid regions in which the dry soil led to an increasing sensible heat flux and temperature and subsequently potential evapotranspiration. 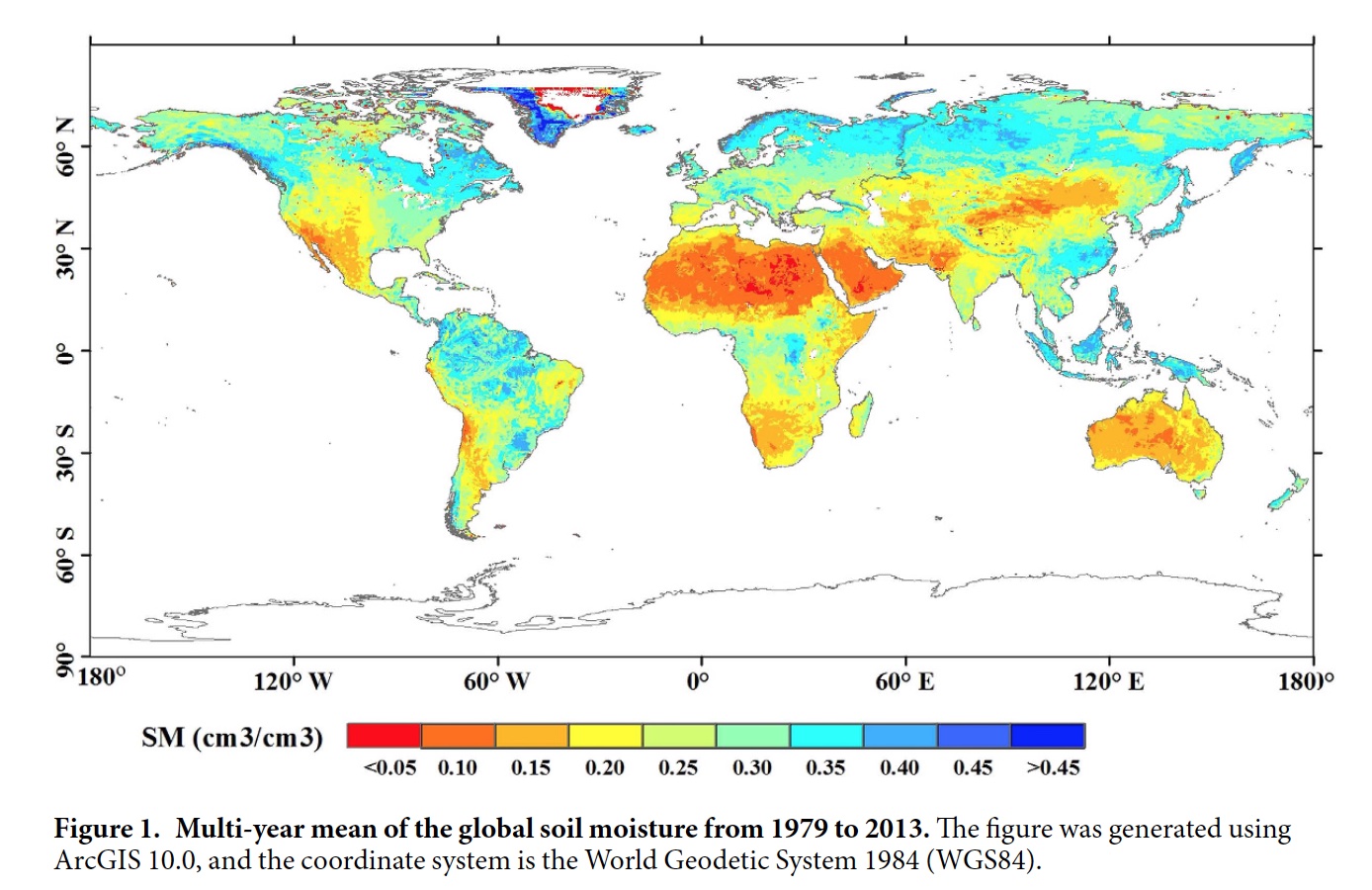 I will skip any discussion about the subtle differences between DGDWGW and DIDWIW. In the meantime, we can immediately notice from Figure 1 that the wet-dry distribution across the US, approximately coincides with the US map shown in last week’s blog. Below, I’m including some news coverage of a few of these dry regions around the world, focusing especially on the effects on food supply. I chose three examples: one from California, one from Argentina, and one from Madagascar. All three have faced repeated, long-term difficulties with food production. That has led to many climate migrants: despairing people searching more productive locations—whether inside or outside their native countries.

The impacts of California’s deepening drought hit home for Central Valley farmers earlier this week, when federal officials announced they didn’t have enough water to supply many of their agricultural customers. Urban users south of San Francisco in Santa Clara County saw their normal water deliveries cut in half.

Lake Mead, a reservoir formed by the construction of the Hoover Dam in the 1930s, is one of the most important pieces of infrastructure on the Colorado River, supplying fresh water to Nevada, California, Arizona, and Mexico. The reservoir hasn’t been full since 1983. In 2000, it began a steady decline caused by epochal drought. On my visit in 2015, the lake was just about 40 percent full. A chalky ring on the surrounding cliffs marked where the waterline once reached, like the residue on an empty bathtub. The tunnel far below represented Nevada’s latest salvo in a simmering water war: the construction of a $1.4 billion drainage hole to ensure that if the lake ever ran dry, Las Vegas could get the very last drop.

ROSARIO, Argentina — The fisherman woke up early on a recent morning, banged on the fuel containers on his small boat to make sure he had enough for the day, and set out on the Paraná River, fishing net in hand.

The outing was a waste of time. The river, an economic lifeline in South America, has shrunk significantly amid a severe drought, and the effects are damaging lives and livelihoods along its banks and well beyond.

“I didn’t catch a single fish,” said the 68-year-old fisherman, Juan Carlos Garate, pointing to patches of grass sprouting where there used to be water. “Everything is dry.”

Droughts in Grand Sud, Madagascar, have sharply increased in both frequency and intensity in recent years. Bearing the full brunt of the effects of climate change, families who live in this region have seen drastic impacts on their livelihoods and health.

In 2020, there were virtually no rains. Historically low rainfall levels depleted the few sources of clean water that existed in this chronically dry region. As a result, water-borne illnesses such as diarrhea have increased sharply. And, without rain, there could be no harvests. Food insecurity and malnutrition rose.

“What little I produced in the past has been completely consumed. I don’t know the dates, but it’s been a long time since I had a harvest,” says Maliha, 38, a single mother of eight children. “Since the rain stopped, the children are not eating regularly. I give them whatever I can find, like cactus leaves. With this diet, they have diarrhea and nausea, but we have no choice. At least it doesn’t kill them.”

Many families struggled to survive 2020 and hoped for a better year in 2021. Sadly, the rains have not yet come.

Globally, agriculture uses about 70% of all fresh water. Climate change causes weather patterns to shift but you can’t just move agricultural fields. Nor is moving the people that make their livelihood from them a trivial matter. Often, people leave the drying fields behind and try to move to places with better prospects. The result is a massive increase in environmental refugees, thousands of acres of fallow land, and a drastic decrease in food availability for people that can ill afford it.

Micha Tomkiewicz, Ph.D., is a professor of physics in the Department of Physics, Brooklyn College, the City University of New York. He is also a professor of physics and chemistry in the School for Graduate Studies of the City University of New York. In addition, he is the founding-director of the Environmental Studies Program at Brooklyn College as well as director of the Electrochemistry Institute at that same institution.
View all posts by climatechangefork →
This entry was posted in Climate Change, Extreme Weather, immigration, refugee, Water and tagged Argentina, Arid, California, Colorado River, desert, Drought, dry, environmental refugee, EPA, Flood, Food, food security, immigration, Madagascar, migration, moisture, Precipitation, rain, Water, wet. Bookmark the permalink.