The End of Oil?

Posted on October 12, 2021 by climatechangefork

The UN COP26 is almost here:

The latest round of global climate talks will take place from 31 October to 12 November 2021 in Glasgow, United Kingdom. Thousands of government delegates and people from civil society, business and the media will gather to advance climate action. The world will be watching and demanding that national leaders rise to the moment, given the mounting climate crisis.

Lately, I have focused on energy companies and the pressure that they are facing to finally acknowledge their responsibility to act on mitigating climate change. They are being pushed to stop denying and wishing away climate change threats and instead use their enormous resources to do something. The important question has always been what they should do. As I have tried to make clear, we can only mitigate climate change effectively if we can, as a society, go carbon-free within the next generation (roughly by mid-century)—a timetable that lines up with the stated objective of the Paris agreement and COP26. Obviously, at the same time, we must also ensure an alternative energy supply to sustain the global economy. We are not yet clear about exactly how to successfully complete this transition within the available timeline.

Last week, I took a more critical look at oil companies and the pitfalls so far in the transition. Am I suggesting the end of oil usage and with it, the end of oil companies? My answer for the moment is no, but it is within the purview of these companies to demonstrate how they are going to join the effort to lessen their carbon output.

Table 1 shows how oil, gas, and automotive companies rank within a recent list of the world’s 50 largest companies, based on their 2020 revenues. Out of the 50, 10 belong in this subset. I have included automotive companies because their vehicles run on the gasoline that the oil companies provide. Their strategy for ditching carbon-based fuels within the next generation seems to focus on electric cars and hydrogen. I will demonstrate this with a look at the changes taking place at Mercedes-Benz. Indeed, electric cars can be beneficial to this fight—but only if their power source itself is renewable/carbon-free.

Table 1 – Oil, gas, and automotive companies, as ranked among the world’s 50 largest companies by 2020 revenue. (List is taken from Wikipedia, based on Fortune’s Global 500 list. *superscripts indicate that the government owns more than 50% of the company. The original tally was published in August 2021. 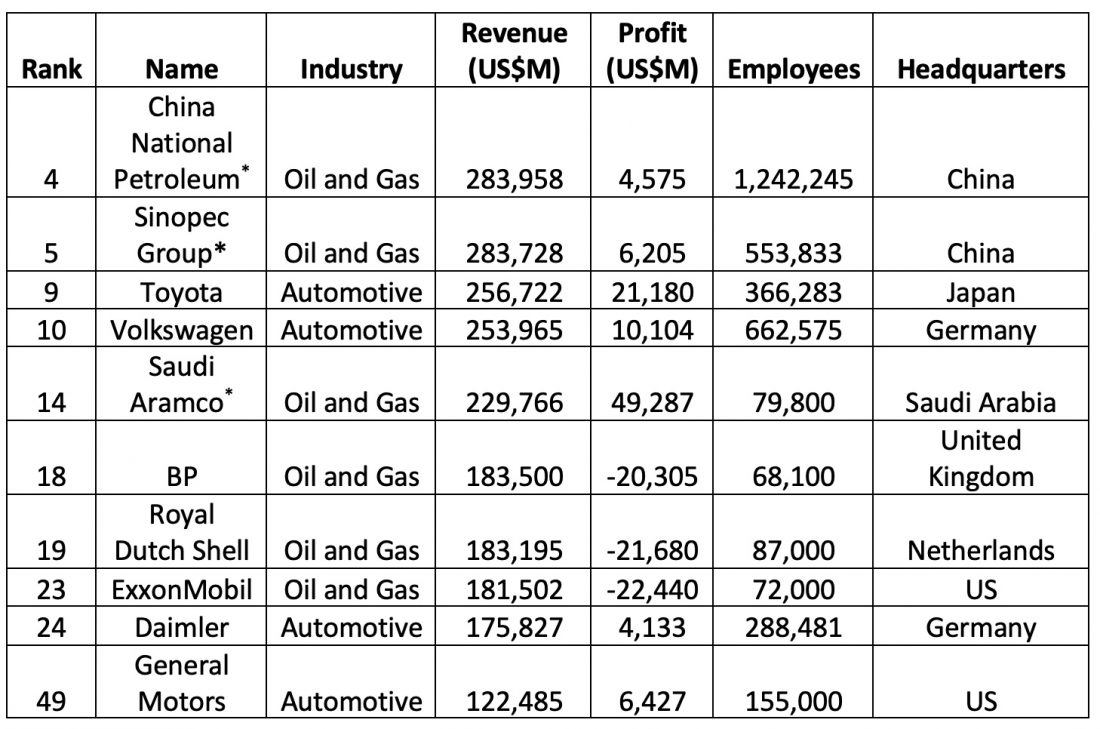 The collection of developed countries called the OECD writes this about the transition to a carbon-free economy:

Ambitious action on climate that keeps the warming of the planet as far below 2 degrees as possible is an imperative if we are to ensure a future for humanity. There can be no doubt that a zero-carbon world is possible, but we have choices about how we manage the transition. A just transition ensures environmental sustainability as well as decent work, social inclusion, and poverty eradication. Indeed, this is what the Paris Agreement requires: National plans on climate change that include just transition measures with a centrality of decent work and quality jobs. The sectoral and economic transformation we face is on a scale and within a time frame faster than any in human history. There is a real potential for stranded workers and stranded communities. Transparent planning that includes just transition measures will prevent fear, opposition and inter-community and generational conflict. People need to see a future that allows them to understand that, notwithstanding the threats, there is both security and opportunity. There are reasons for optimism. In the EU, renewable energy is on track to be 50% of energy supply by 2030. Globally, the renewable energy sector employed 8.1 million workers in 2015, with an additional 1.3 million workers employed in large hydropower. Heavy industry typically has had few good technological solutions for cutting emissions. Now, Dalmia, an Indian cement company, is producing a new blended cement with 50% less emissions than the global industry average. Nonetheless, the just transition will not happen by itself. It requires plans and policies. Workers and communities dependent on fossil fuels will not find an alternative sources of income and revenue overnight. This is why transformation is not only about phasing out polluting sectors, it is also about new jobs, new industries, new skills, new investment and the opportunity to create a more equal and resilient economy.

Meanwhile, here is what is taking place at the world’s largest long-haul truck maker:

Carmakers have been promising to scrap the internal combustion engine, and now it’s the truckmakers’ turn. But the makers of giant 18-wheelers are taking a different route.

Daimler, the world’s largest maker of heavy trucks, whose Freightliners are a familiar sight on American interstates, said last week that it would convert to zero-emission vehicles within 15 years at the latest, providing another example of how the shift to electric power is reshaping vehicle manufacturing with significant implications for the climate, economic growth and jobs.

The journey away from fossil fuels will play out differently and take longer in the trucking industry than it will for passenger cars. For one thing, zero emission long-haul trucks are not yet available in large numbers.

And different technology may be needed to power the electric motors. Batteries work well for delivery vehicles and other short-haul trucks, which are already on the roads in significant numbers. But Daimler argues that battery power is not ideal for long-haul 18-wheelers, at least with current technology. The weight of the batteries alone subtracts too much from payload, an important consideration for cost-conscious trucking companies.

Instead, Daimler and some rivals are betting on fuel cells that generate electricity from hydrogen. Fuel cells produce no tailpipe emissions, and hydrogen fuel tanks can be refilled as fast as diesel tanks — a distinct advantage compared with batteries, which typically take at least twice as long to recharge.

As I will try to make clear in the next few blogs, the ultimate energy shift will amount to joining the hydrogen-based energy budget of the universe (see my April 2, 2019 blog post for background):

Over 90% of atoms in the universe belong to a single element. It’s the element responsible for the Solar System’s largest ocean — a vast and vaporous sea somewhere beneath Jupiter’s turbulent cloud cover. And yet this Jovian ocean is made not of water, but is instead a deep chasm of liquid metallic hydrogen. The conditions needed to create liquid metallic hydrogen are too extreme for us to simulate in our laboratories here on Earth, though we do have access to hydrogen in its less extreme gas and liquid form. Already we use around 70 million metric tons of it each year in industries pertaining to chemical and fertilizer production, food processing, oil refineries, and more.

But hydrogen is poised to go far beyond these sectors, revolutionizing everything from the power in our homes to our environmental impact on the planet. In a survey conducted with automotive executives in 2017, over 75% of them believed the true breakthrough in electric vehicles would come not from battery electric vehicles such as Teslas, but from hydrogen fuel cell cars. By 2030 it is possible that hydrogen power will have become a $140 billion industry with over 700,000 jobs. What exactly makes it such a promising element in the future of our energy?

There are different opinions as to the feasibility of a hydrogen economy:

A so-called ‘hydrogen economy’ assumes we can produce renewable electricity inexhaustibly and continue to lead our resource-depleting lifestyles. Pat Baskett argues that this isn’t the future we want.

Our energy needs involve complex decisions with profound implications. One, already on the horizon, concerns hydrogen. The cycle of its production and use is deceptively attractive because it can be emissions-free, beginning and ending with water. Alongside that fact lies a hornets’ nest of negative features and a host of questions about how we plan our future.

The story of hydrogen is, literally, colourful. It is described as green, blue or brown, according to how it is produced. The brown version is made from coal or natural gas (methane) by separating hydrogen atoms from carbon atoms in a process called “steam reforming” and which releases CO2. This emissions-rich “brown” kind accounts for 95 percent of what is used around the world today.

If it’s blue, that same process using fossil fuels is said to incorporate the means of capturing and storing the carbon emissions. But this technology, known as carbon capture and storage (CCS), is expensive and undergoing further research.

Green hydrogen fits the initial picture of carbon neutrality if it meets two criteria: it must be made from water and the process of electrolysis used to produce it must be powered by renewable electricity.

Hydrogen of whatever colour is either compressed or liquified for storage and is used in fuel cells – where it is electrochemically combined with air to create electricity, which drives an electric motor. Water vapour is the only gas emitted.

Table 2 – The four largest automotive companies, by net worth

Next week, I will go into more detail on the concept of joining the cosmological hydrogen economy mentioned in the piece I cited above.