The Anthropocene Leads Us Back to the Copernican Revolution

Posted on January 17, 2023 by climatechangefork 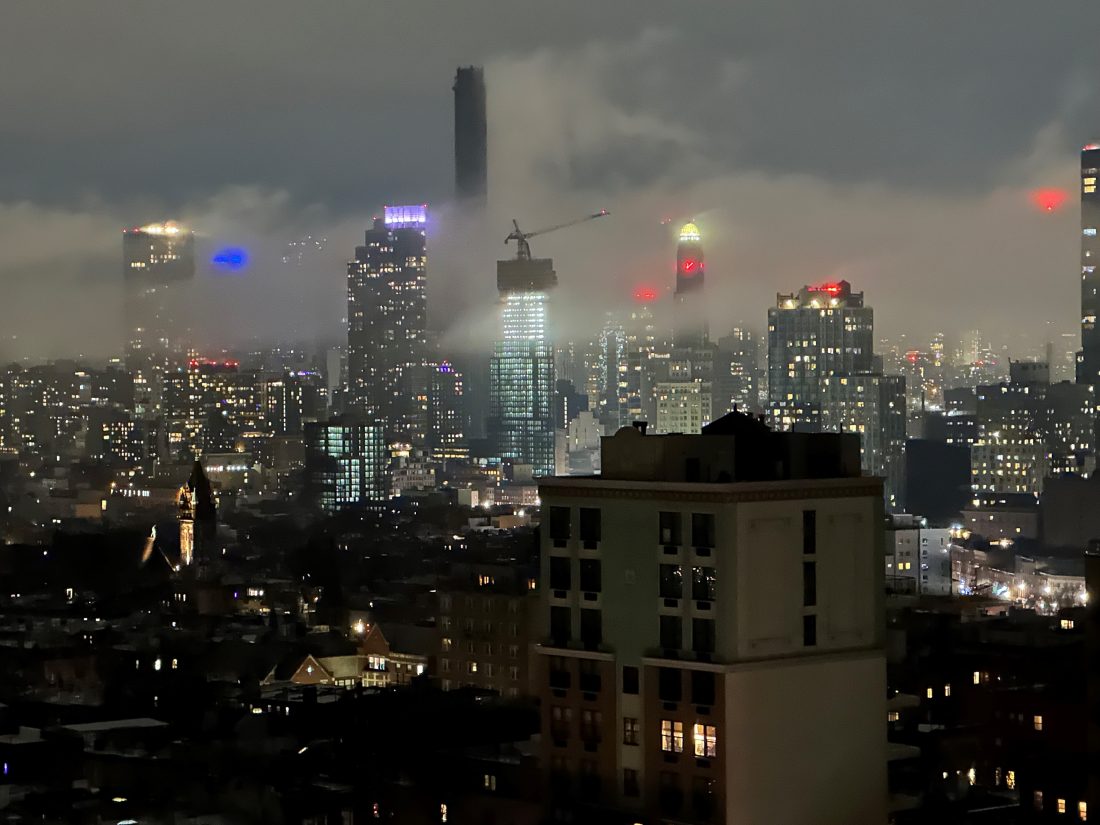 The last day of 2022 was a rainy day in New York City. We were looking forward to the fireworks celebrations without much hope. However, as midnight approached the weather started to clear. We decided to look for the best location in our neighborhood to watch fireworks and give it a try. I took some photographs that later I posted on my personal Facebook feed, including the one above. A clock on one of the skyscrapers is visible, showing it to be a few minutes past midnight. Looking at the post-storm city post-midnight made me realize that I have been missing the main point of our global transformation that is now under the final first stages of discussion of being officially labeled as the Anthropocene. Last week’s blog started with a quote from a recent article in the New York Times that brought me back to the discussion. The last few quoted paragraphs from the article emphasized that the renaming of the geological period is far from being unanimous. Below is a repeat of some of the objections:

… Still, the knives are out for the Anthropocene, even though, or maybe because, we all have such firsthand familiarity with it.

Stanley C. Finney, the secretary general of the International Union of Geological Sciences, fears the Anthropocene has become a way for geologists to make a “political statement.”

Within the vast expanse of geologic time, he notes, the Anthropocene would be a blip of a blip of a blip. Other geologic time units are useful because they orient scientists in stretches of deep time that left no written records and sparse scientific observations. The Anthropocene, by contrast, would be a time in Earth’s history that humans have already been documenting extensively. “For the human transformation, we don’t need those terminologies — we have exact years,” said Dr. Finney, whose committee would be the last to vote on the working group’s proposal if it gets that far.

The opening figure of the last blog shows that if the proposal is approved, the widely agreed starting point of the Anthropocene will be the start of the nuclear age: a dot on the timeline. I described this dot in an earlier blog (October 30, 2018): I was a small kid who had already experienced significant historic events (like the Holocaust) when this dot took place. None of the other eons, eras, periods, epochs, or ages—as designated by the International Commission on Stratigraphy, fits this description and such a designation will be regarded as a major departure. The question remains—regarded by whom??

In many aspects, this whole blog (567 posts since April 2012) is focused on the Anthropocene. The Anthropocene is often defined (see the January 17, 2017 blog) as an “Epoch that begins when human activities started to have a significant global impact on Earth’s ecosystem.” However, almost all of my writings, and almost everybody else’s, are targeted attempts to prevent accelerating climate change from causing human extinction. A few relevant old blogs that might be useful to read (or reread) are: “Educating for the Anthropocene” (May 24, 2016), “Two Anthropocenes” (October 23, 2018), and the blog that I mentioned earlier, “My Anthropocene” (October 30, 2018). Looking back at the photograph posted at the start of this blog, I am realizing that most of us miss something central to the Anthropocene when we consider it – that we are all part of it. This sounds trivial, but it is not. As the final decision about formalizing the concept is approaching it will be useful to generalize the concept. As I see it, the impact of the change might turn out to be equivalent in scale to the Copernican Revolution.

This is a big claim, and it will obviously require a few blogs to try to justify it. So, I will start with the photograph. It was taken just after midnight at the tail-end of a storm. The near neighborhood is sharp and clear. Much of the far neighborhood is buried in low-lying clouds with some of the skyscrapers, including the one with the clock (Williamsburgh Savings Bank Tower) emerging from the clouds amid glowing lights.

I am fortunate that my background allows me to teach both cosmology and climate change. Since both classes fall under the category of science, I am starting both with a short history of the scientific revolution.  After a short description of the science that prevailed before Copernicus (1473-1543), I progress through the Copernican Revolution. One of the best ways to get acquainted with the Copernican Revolution is to go through some of the original writings. Probably the most convenient way to do so is to scan through a book titled On the Shoulders of Giants: The Great Works of Physics and Astronomy (Running Press 2002). The book was edited, with commentaries, by Stephen Hawking. The bulk of the book (1264 pages) comprises original manuscripts by Nicolaus Copernicus, Galileo Galilei, Johannes Kepler, Sir Isaac Newton, and Albert Einstein. The book by Copernicus, On the Revolutions of Heavenly Spheres, is credited with triggering what we now label as the Copernican Revolution.

In a bit more technical terms, the Copernican Revolution moved us from the geocentric model, in which all the heavenly bodies that are visible to us circle Earth, to a heliocentric model, in which we—and the other planets that we can see—circle the sun. Copernicus’ argument was based on detailed calculations that basically show that it is much simpler to account for all our observations if we assume that we are not special (everything circling around us would make us very special).

In the next few blogs, I will start discussing my perspectives on how to live, die, govern, and educate in an Anthropocene that hosts all of us.

The first prerequisite to successfully conducting all these activities is to be guided by proven methodologies to quantifiably understand our new environment. It took all the way to Isaac Newton (1643-1727), almost 200 years, for the Heliocentric model to become the ruling guiding model. The Catholic Church was the leading opponent because the new model directly infringed on its dominance. Many believers before Newton were tried, convicted, and in a few cases executed, for their belief in the new model. Perhaps the most famous case is that of Galileo Galilei, whose retraction did not appease the Church:

Galileo took back his statement, but still lived under house arrest for the rest of his life. It took 359 years and the leadership of Pope John Paul II (left) to recognize the wrong. On October 31, 1992, he formally apologized for the “Galileo Case” in the first of many famous apologies during his papacy.

I don’t believe that people will be executed for believing in the Anthropocene, but I do believe that the social tension overall will be as, or more, intense because the transformation will have a direct impact on all our lives.

Going back to Isaac Newton, by almost all accounts, he was able to put much of the controversy to rest by integrating mathematics into the parts of metaphysics that dealt with the physical environment. Thus, he was instrumental in the formation of two cultures: science and the rest of the academic disciplines. We are now in the process of removing the boundaries between these two cultures (see the July 31, 2012 blog) by integrating databases and some advanced mathematics into our understanding of social sciences. Future blogs will try to summarize how we are doing on this.

Going back to the picture at the beginning of the blog, finding a spot to photograph aspects of what is happening from a distance might help us understand the new reality. We now have the technology to photograph aspects of the universe going back to the initial star formation, now thought to take place more than 12 billion years ago. We are certainly in the process of developing the tools to objectively observe our own planet.

Micha Tomkiewicz, Ph.D., is a professor of physics in the Department of Physics, Brooklyn College, the City University of New York. He is also a professor of physics and chemistry in the School for Graduate Studies of the City University of New York. In addition, he is the founding-director of the Environmental Studies Program at Brooklyn College as well as director of the Electrochemistry Institute at that same institution.
View all posts by climatechangefork →
This entry was posted in Anthropocene. Bookmark the permalink.