The Terrain Part 1: Doing Nothing and Fixing Whatever Happens.

Posted on June 4, 2013 by climatechangefork

Some of the recent headlines illustrate the broad terrain of tradeoffs and consequences we must navigate in deciding the policies for Earth’s future, in which our children and grandchildren will have to live.

This quote from ExxonMobil CEO, Rex Tillerson, speaking to ExxonMobil shareholders in Dallas, spread rapidly through the blogosphere: “What good is it to save the planet if humanity suffers?” Tillerson’s version of humanity’s suffering refers to the inconvenience implied by minimizing our carbon footprints by requiring and enforcing a decreased reliance on fossil fuel. I am not sure yet, however, what he includes in his definition of “humanity.” He was further quoted on a previous occasion, referring to the “manageable” risks of climate change:

As a species that’s why we’re all still here: we have spent our entire existence adapting. So we will adapt to this. It’s an engineering problem, and it has engineering solutions.

ExxonMobile’s direct involvement in funding active climate change deniers, has long been a topic of some controversy, and statements such as this do little to calm such arguments.

By “engineering solutions,” Mr. Tillerson probably means geoengineering. In a recent Op-Ed in the New York Times (5/27/2013) titled, “Geoengineering – Our Last Hope, or a False Promise?” Clive Hamilton tries to examine the ethical aspects of geoengineering.  He describes the concept in the following way:

Geoengineering — the deliberate, large-scale intervention in the climate system to counter global warming or offset some of its effects — may enable humanity to mobilize its technological power to seize control of the planet’s climate system, and regulate it in perpetuity.

But is it wise to try to play God with the climate? For all its allure, a geoengineered Plan B may lead us into an impossible morass.

While some proposals, like launching a cloud of mirrors into space to deflect some of the sun’s heat, sound like science fiction, the more serious schemes require no insurmountable technical feats. Two or three leading ones rely on technology that is readily available and could be quickly deployed.

After examining some technical aspects of the issue, he focuses on the central dilemma:

The idea of building a vast industrial infrastructure to offset the effects of another vast industrial infrastructure (instead of shifting to renewable energy) only highlights our unwillingness to confront the deeper causes of global warming — the power of the fossil- fuel lobby and the reluctance of wealthy consumers to make even small sacrifices.

But then he proceeds to the crux of the issue:

How confident can we be, even after research and testing, that the chosen technology will work as planned? After all, ocean fertilization — spreading iron slurry across the seas to persuade them to soak up more carbon dioxide — means changing the chemical composition and biological functioning of the oceans. In the process it will interfere with marine ecosystems and affect cloud formation in ways we barely understand.

Enveloping the earth with a layer of sulfate particles would cool the planet by regulating the amount of solar radiation reaching the earth’s surface. One group of scientists is urging its deployment over the melting Arctic now.

Plant life, already trying to adapt to a changing climate, would have to deal with reduced sunlight, the basis of photosynthesis. A solar filter made of sulfate particles may be effective at cooling the globe, but its impact on weather systems, including the Indian monsoon on which a billion people depend for their sustenance, is unclear.

The uncertainty implicit in future predictions of climate change is a major research focus throughout the world, and a significant aspect of my blog. The main component of this uncertainty is estimating the climate sensitivity, which requires projections of humanity’s future population growth, economic growth, energy use and the specific energy sources. As I described in my November 26, 2012 blog, we use the IPAT equation (Impact = Population x Affluence x Technology) to calculate this. Climate sensitivity is defined as the average global temperature increase that is predicted to take effect due to the atmospheric concentration of carbon dioxide doubling from the pre-Industrial Revolution levels of 280 ppmv (parts per million volume). We have now passed the 400 ppmv marker. 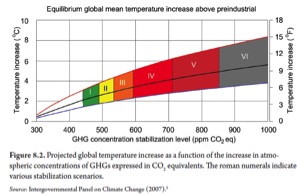 The uncertainty of climate sensitivity is quantitatively estimated in the figure above (repeated from my December 10, 2012 blog). One of the major causes of the lack of certainty is insufficient understanding of non-linearities in the climate system (tipping points). Here the uncertainties are focused on ongoing processes in a well defined system – our planet. The uncertainties in geoengineering are compounded when we take into account that such ventures have never been attempted on such a vast scale.  We are familiar with the concept of unintended consequences, but it is hard to comprehend their potential magnitude in an undertaking this large. In this instance, we’re talking about our planet; if we mess it up, we have nowhere else to go.

Micha Tomkiewicz, Ph.D., is a professor of physics in the Department of Physics, Brooklyn College, the City University of New York. He is also a professor of physics and chemistry in the School for Graduate Studies of the City University of New York. In addition, he is the founding-director of the Environmental Studies Program at Brooklyn College as well as director of the Electrochemistry Institute at that same institution.
View all posts by climatechangefork →
This entry was posted in Climate Change and tagged Carbon Footprint, Climate Change, Climate Change Denial, Climate Change Deniers, Climate Sensitivity, Collateral Damage, Consequences, Earth, ExxonMobil, Fossil Fuels, Geoengineering, Global Warming, IPAT, Ocean Fertilization, Science, Tipping Point. Bookmark the permalink.

4 Responses to The Terrain Part 1: Doing Nothing and Fixing Whatever Happens.