Back to “Self-Inflicted Genocide”: Roger Hallam & the Holocaust

Posted on December 3, 2019 by climatechangefork

My original plan was to follow up on last week’s blog and look into the recurring complexities of the California fires. In light of the major power outages, some residents have gone so far as to claim that California has lost its capability to support human activity. As happens so often, however, I realigned my priorities based on more recent news. In this case, it was a New York Times article about climate change activist Roger Hallam diminishing the horrors of the Holocaust that brought me up short:

LONDON — A founder of the climate activism group Extinction Rebellion apologized on Thursday for the “crass words” he used to describe the Holocaust as “an almost normal event” and just another ugly episode in human history.

The founder, Roger Hallam, said in an interview with the German weekly Die Zeit that among various genocides that had occurred in previous centuries, the Holocaust, in which the Nazis killed millions of Jews during World War II, was not that unusual.

“The fact is that in our history, millions of people have been regularly killed under dire circumstances,” Mr. Hallam, who is British, said in excerpts published online on Wednesday. “To be honest, you could say: This is an almost normal event.”

Mr. Hallam’s remarks were made ahead of the German publication of his book, “Common Sense for the 21st Century.” In the book, which was published in Britain in September, he draws parallels between the Holocaust and the threats posed by the climate crisis.

Luisa Neubauer, a German climate activist with the group Fridays for Future, told the German newspaper Bild that such words were “insane.” She said in a phone interview on Thursday, “No matter who says those words, it is doing harm to our democracy, to our understanding of the past and the incredible crimes that have been committed.”

Heiko Maas, the German foreign minister, wrote on Twitter using the hashtag #ExtinctionRebellion, “The Holocaust is more than millions of dead and horrific torture methods.” He added, “We must always be aware of that so we can be certain: never again!”

After I read the piece, I looked at my wife and told her to prepare for somebody using my activities on this blog as a reason to fire me from my job. Among other things, I teach students about climate change and specifically describe the future prospects of business as usual climate change as a “self-inflicted genocide.” She looked at me with a smile and assured me she would support me. Furthermore, she said, there was a big distinction between my teaching and Mr. Hallam’s statements, so it was unlikely my job was in jeopardy. For starters, I don’t belittle the Holocaust. Rather, I warn about the ever-worsening impacts of business as usual practices on climate change and their ultimate conclusion without coordinated global mitigation efforts. I thanked her for her encouragement but nevertheless found it necessary to compare myself to Mr. Hallam.

In my first blog (April 22, 2012), I tried to establish the connections between my own experiences in the Holocaust and my work on climate change. I concluded with the following paragraph:

Arnold Toynbee wrote that civilizations die from suicides, not murder. Even if the predicted consequences of “business as usual” environmental scenarios over the next 70 years turn out to be wrong in some details and even slightly wrong in timing, it’s clear that once we pass a critical point in the ability of the planet to adapt to the accumulation of greenhouse gases in our atmosphere, the consequences amount to global suicide – a self-inflicted genocide. We know what we must do to mitigate this possible future genocide, but we need our collective will to do so. We can’t allow the deniers to win again.

The last two sentences in that paragraph weren’t the start of my attempt to associate possible future consequences of unmitigated climate change with the Holocaust. It is a theme I have been discussing for over ten years. I have covered it in almost every talk that I have given on both topics and included it in the last chapter of the 2011 book that I wrote about climate change (Climate Change: The Fork at the End of Now – Momentum Press). I started this blog more than 7 years ago as another platform to broaden the reach of my warning. I strongly believe that my background provides me with the responsibility to spread this message.

The first blog provoked 82 responses, which I encourage you to revisit. The sizeable reaction forced me to follow up with more details. The two blogs that followed (May 7 and May 14, 2012) received 63 and 61 responses, respectively.

Today, a search on this blog for the term, “self-inflicted genocide” will yield 23 entries.

Three years ago, a group of students from the University of Pennsylvania who were trying to convince the university’s trustees to stop investing in fossil fuels read some of my material and invited me to take part in a panel about the topic. I joined them on December 1, 2016 to address the theme: Is Fossil Fuel Use A Moral Evil? Following the talk, Chris Doyle, one of the organizers of the event, summarized the arguments in a local paper. I am including some excerpts here:

The use and manufacture of fossil fuels is often criticized as irresponsible and destructive — but rarely is it compared to genocide.

Student activist group Fossil Free Penn hosted a discussion focused on the validity of this harrowing comparison Thursday, following the Trustee’s September decision not to divest from fossil fuels. In a letter written to Fossil Free Penn on the day of the decision, Chairman of the Trustees David L. Cohen said the activities of fossil fuel companies do not constitute a “moral evil” that is “on par with apartheid or genocide.”

An active promoter of climate change awareness and researcher of alternative energy, Tomkiewicz said the comparison between fossil fuel and genocide is not entirely apt. He said making such a comparison would require proof of mal-intent, which he said cannot be found in either fossil fuel producers or consumers.

Further, he warned that the exaggerated references to events like the Holocaust weaken the anti-fossil fuel campaign.

Tomkiewicz explained that if fossil fuel consumption continues at its current rate, it could eventually meet the definition of a moral evil. According to his analysis, current greenhouse gas emissions threaten the human race with profound disaster and could mean the end for different peoples and cultures around the globe.

Continuing to neglect the issue of climate change would qualify as implicit intent, tantamount to “self-inflicted genocide,” he said.

“The fact that everybody knows about it, yet still chooses politically to continue, and not care what will happen sixty to seventy years from now, to me, constitutes intent,” Tomkiewicz said. “So for all practical purposes, not right now [fossil fuel use] constitutes a genocide, but [it will] if we continue with business as usual.”

As you can see from the roughly 200 combined comments my first three blogs garnered, this line of comparisons has plenty of proponents and opponents. Nor were the comments and responses confined to the comments section or academic presentations.

I also received copies of three anti-Semitic caricatures in my mailbox at the University. I am including one here to illustrate the depth of Holocaust denial and hatred of Jews. 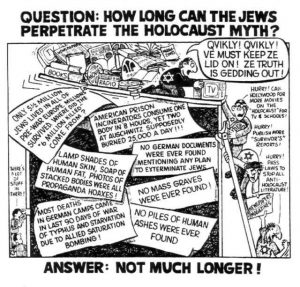 It is important to note that, as the Anti-Defamation League (ADL) explains:

…Holocaust denial is not simply a gross distortion of the facts, but is also a pernicious form of anti-Semitic hate speech that serves no other purpose than to attack Jews…

…We are talking here about a conspiracy theory which argues that Jews around the world knowingly fabricated evidence of their own genocide in order to extract reparations money from Germany, gain world sympathy and facilitate the theft of Palestinian land for the creation of Israel. It is founded on the belief that Jews are able to force governments, Hollywood, the media and academia to promote a lie at the expense of non-Jews.

My experiences with the consequences of comparing the Holocaust to climate change are different from those that Mr. Hallam is currently facing. I am not in as public or prominent of a position, so I didn’t get the attention of the foreign minister of a major country or cancellations of previous commitments to publish my work. Granted, I also didn’t try to make the comparison based on the actual number of victims. My use of the term self-inflicted genocide refers to the relatively distant future, while the Holocaust refers to a confirmed past event. 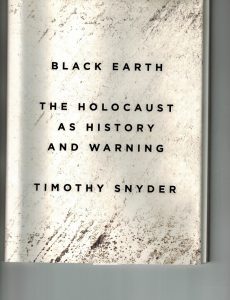 Two months from now, on January 27, 2020, we will mark International Holocaust Remembrance Day:

International Holocaust Remembrance Day, is an international memorial day on 27 January commemorating the victims of the Holocaust. It commemorates the genocide that resulted in the death of an estimated 6 million Jewish people, 2 million Romani people, 250,000 mentally and physically disabled people, and 9,000 homosexual men by the Nazi regime and its collaborators. It was designated by the United Nations General Assembly resolution 60/7 on 1 November 2005 during the 42nd plenary session.[1] The resolution came after a special session was held earlier that year on 24 January 2005 during which the United Nations General Assembly marked the 60th anniversary of the liberation of the Nazi concentration camps and the end of the Holocaust.[2]

On 27 January 1945, Auschwitz-Birkenau, the largest Nazi concentration and death camp, was liberated by the Red Army.

Resolution 60/7 establishing 27 January as International Holocaust Remembrance Day urges every member nation of the U.N. to honor the memory of Holocaust victims, and encourages the development of educational programs about Holocaust history to help prevent future acts of genocide. It rejects any denial of the Holocaust as an event and condemns all manifestations of religious intolerance, incitement, harassment or violence against persons or communities based on ethnic origin or religious belief. It also calls for actively preserving the Holocaust sites that served as Nazi death camps, concentration camps, forced labor camps and prisons, as well as for establishing a U.N. programme of outreach and mobilization of society for Holocaust remembrance and education.

As we think about the tragedies of the past, let’s also start planning for ways to prevent those of the future.

Micha Tomkiewicz, Ph.D., is a professor of physics in the Department of Physics, Brooklyn College, the City University of New York. He is also a professor of physics and chemistry in the School for Graduate Studies of the City University of New York. In addition, he is the founding-director of the Environmental Studies Program at Brooklyn College as well as director of the Electrochemistry Institute at that same institution.
View all posts by climatechangefork →
This entry was posted in Anthropogenic, Climate Change, Holocaust and tagged Adaptation, ADL, Anti-Defamation League, anti-semitic, antisemitic, business as usual, Climate Change, climate change denier, Climate Skeptics, Comment, denial, deniers, divest, extinction rebellion, Fork, Fossil Fuels, Future, Genocide, Holocaust, Holocaust denier, Holocaust Remembrance Day, Jew, Jewish, Mitigation, moral evil, morality, Roger Hallam, Self Inflicted Genocide, self-inflicted, Timothy Snyder. Bookmark the permalink.

2 Responses to Back to “Self-Inflicted Genocide”: Roger Hallam & the Holocaust