Posted on May 5, 2020 by climatechangefork

Saturday was a beautiful spring day. The Brooklyn green market downstairs was open. The street and the market were relatively (in the pandemic era) crowded; well managed social distancing was enforced but many people went without masks. The talk of the town almost everywhere was whether or not to re-open and how to do so.

The Economist invited contributions from a few influential contributors to outline their views on a post-COVID-19 world. Among them was Bill Gates, co-founder of Microsoft and co-director of the Bill and Melinda Gates Foundation. The latter is one of the leading global charities, whose motto is, “All lives have equal value.”

He addresses the repercussions of the coronavirus. But the majority of his contribution focuses on his belief that a post-COVID-19 world cannot come about until we can develop effective vaccines and treatments to eradicate the virus everywhere:

WHEN HISTORIANS write the book on the covid-19 pandemic, what we’ve lived through so far will probably take up only the first third or so. The bulk of the story will be what happens next.

In most of Europe, East Asia and North America the peak of the pandemic will probably have passed by the end of this month. In a few weeks’ time, many hope, things will return to the way they were in December. Unfortunately, that won’t happen.

I believe that humanity will beat this pandemic, but only when most of the population is vaccinated. Until then, life will not return to normal. Even if governments lift shelter-in-place orders and businesses reopen their doors, humans have a natural aversion to exposing themselves to disease. Airports won’t have large crowds. Sports will be played in basically empty stadiums. And the world economy will be depressed because demand will stay low and people will spend more conservatively.

As the pandemic slows in developed nations, it will accelerate in developing ones. Their experience, however, will be worse. In poorer countries, where fewer jobs can be done remotely, distancing measures won’t work as well. The virus will spread quickly, and health systems won’t be able to care for the infected. Covid-19 overwhelmed cities like New York, but the data suggest that even a single Manhattan hospital has more intensive-care beds than most African countries. Millions could die.

Wealthy nations can help, for example, by making sure critical supplies don’t just go to the highest bidder. But people in rich and poor places alike will be safe only once we have an effective medical solution for this virus, which means a vaccine.

I hope wealthy nations include poorer ones in these preparations, especially by devoting more foreign aid to building up their primary health-care systems. Even the most self-interested person—or isolationist government—should agree with this by now. This pandemic has shown us that viruses don’t obey border laws and that we are all connected biologically by a network of microscopic germs, whether we like it or not. If a novel virus appears in a poor country, we want its doctors to have the ability to spot it and contain it as soon as possible.

The future, according to Mr. Gates, relies on our ability to eliminate the virus from all countries, regardless of their economic status. So far, we have focused almost exclusively on the richest countries in the world, including the US, Europe, and China (which the World Bank classifies as upper-middle income).

Table 1 lists the number of new coronavirus cases and the resulting deaths in the world’s 10 most populous countries. Together, they account for 60% of the global population. I used data compiled from the Johns Hopkins University database on May 1st. 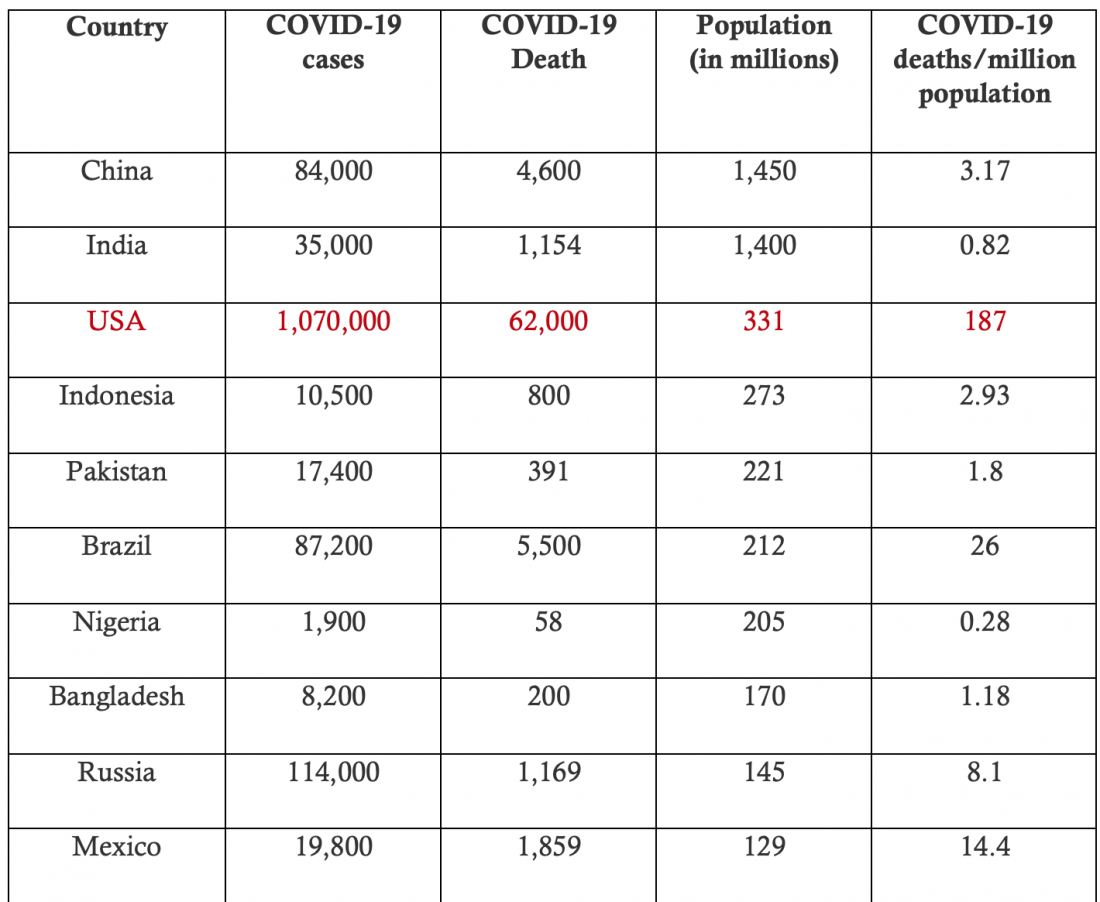 The richest country on this list is the USA. The order of magnitude of difference in density of COVID-19 cases and deaths between the US and the other countries on the list is striking. These differences might result from other location-sensitive causes, but I find that a weak argument. The other major collections of COVID-19 concentrations have been in rich European countries such as Italy, UK, Spain, and France, which are not included in Table 1. Considering that (as I have mentioned in previous blogs) even in the US, the number of cases—and even deaths—are grossly underestimated, we can only conclude that we have no idea what is happening in low- and middle-income countries. Within the US, it was only recently, and in a few states, that COVID-19-related deaths outside of hospitals were included in tallies. Poverty has a direct correlation to weakness in medical infrastructure, so it is unsurprising that other countries have an even harder time estimating casualties. As Mr. Gates has noted, the pandemic cannot be eradicated until it can be dealt with globally.

We can see the scaling of the pandemic everywhere we look. I live in the hottest hot spot in the US: New York City.

Figures 1 and 2 provide the May 1st COVID-19 case distributions in my state:

Figure 1 – New York State coronavirus numbers, as of May 1st 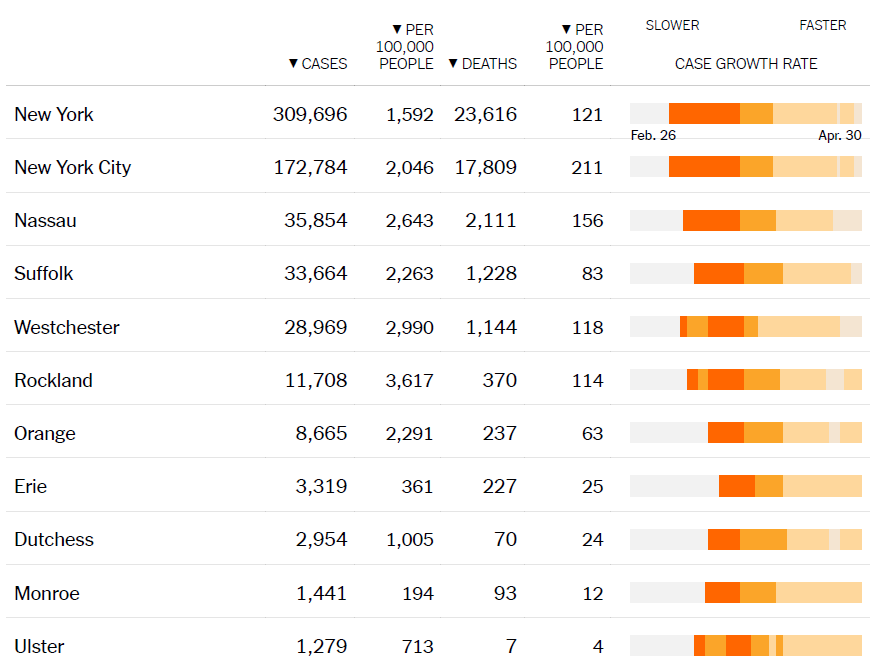 The data show that my state, which makes up 6% of the country’s population, is “home” to 30% of the cases in the US. Meanwhile, NYC accounts for 55% of the cases in NYS, even though it only makes up 42% of the state’s population. We also have data that show the distribution by zip code. From there, one can identify hot spots where people refuse to take social distancing and lockdown measures and/or it is impossible to implement those policies. Of course, essential workers such as the medical community, police, firemen, and crucial online or off-line retail providers (e.g. pharmacies and grocery stores) cannot stay home. Nursing homes are incredibly vulnerable, as are foreign laborers that work in rich countries, homeless people everywhere, and prisoners. Meanwhile, some orthodox religious communities view certain communal activities to be more important than individual safety. By their nature, most of these exceptions to social distancing have much higher concentrations in urban environment than rural ones. Thus, urban hot spots such as NYC, London and Paris attract major headlines for their outbreaks.

Stay safe, everyone, and thanks to those essential workers!

Micha Tomkiewicz, Ph.D., is a professor of physics in the Department of Physics, Brooklyn College, the City University of New York. He is also a professor of physics and chemistry in the School for Graduate Studies of the City University of New York. In addition, he is the founding-director of the Environmental Studies Program at Brooklyn College as well as director of the Electrochemistry Institute at that same institution.
View all posts by climatechangefork →
This entry was posted in Uncategorized and tagged Bangladesh, Bill Gates, Brazil, Brooklyn, case, China, coronavirus, COVID 19, death, Distribution, Economy, effect, epidemic, essential workers, Europe, Future, hot spot, India, Indonesia, Infrastructure, Italy, medical, Mexico, New York, Nigeria, NYC, outbreak, Pakistan, pandemic, Population, Poverty, repercussion, Russia, social distance, Spain, UK, US, virus. Bookmark the permalink.