Posted on May 7, 2012 by climatechangefork 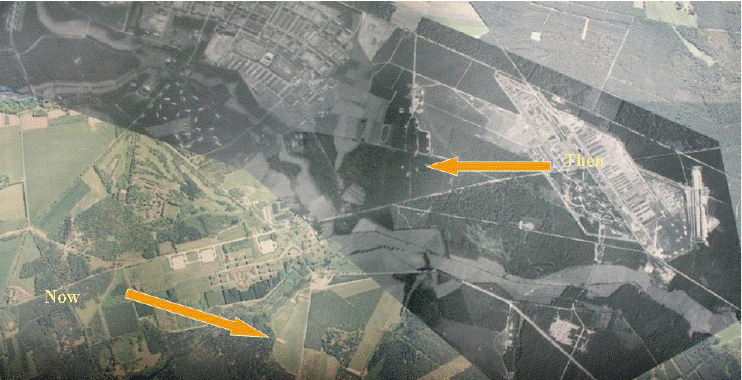 The figure above is the first exhibit in a new memorial to the Bergen-Belsen concentration camp where I spent two years between 1943 and 1945 (see my previous blog for relevance).

It shows the superimposition of two aerial photographs, showing the camp “then” and “now,” to try to convince the skeptics that the camp was in the same place. The rest of the exhibition tries to document the atrocities that took place in the camp through testimonies of survivors, detailed documentation that was kept by the perpetrators and the various artifacts that were associated with the period. The aerial photographs are there to “prove” that all of this is real. Deniers have an impact – there are not many Holocaust deniers around, but the availability of modern communication tools amplifies their voice. A significant fraction of the extensive Holocaust teaching that takes place is targeted at a response.  Sixty-seven years have passed since I was liberated by the American army at Farsleben.  Simple arithmetic indicates that almost all the survivors today were children during the Holocaust, and our numbers are dwindling. Denying the Holocaust today, with all the available factual information, requires denying of all of history. There is no question that the deniers deserve their label.

But most of our history is based on flimsier evidence, and climate change deniers like to say that using scientific “theories” to explain climate change is not really “proof.”  We use scientific theories all the time to explain phenomena that we know exist but can’t readily “see” –  like gravity, for example.  We know gravity exists because we can feel its effects; we can also see climate change’s effects, but the deniers continue to insist it isn’t really proof.

Examples of this refusal to use scientific theories and current climate change evidence abound, unfortunately.

A student of mine at Brooklyn College in a general education course on Energy Use and Climate Change forwarded to me a letter that was published in the on-line publication Business Insider (April 11, 2012). The letter was signed by 49 former NASA employees that included seven Apollo astronauts and two former directors of NASA’s Johnson Space Center calling NASA to move away from climate model predictions and to limit its stance to what can be “empirically proven.” The letter specifically targets James Hansen – Director of NASA Goddard Institute (GISS) (Hansen and the GISS have been acting as the “the canary in the coal mine,” warning, for years, about the consequences of relying on fossil fuels as our main source of energy.) The letter states that, “We believe the claims by NASA and GISS, that man-made carbon dioxide is having a catastrophic impact on global climate change are not substantiated.”  The reason for the doubt includes that.”NASA is relying too heavily on complex climate models that have proven scientifically inadequate in predicting climate only one or two decades in advance” and that “There’s a concern that if it turns out that CO2 is not a major cause of climate change, NASA will have put the reputation of NASA, NASA’s current and former employees, and even the very reputation of science itself at risk of public ridicule and distrust.” This is backwards; it’s the letter that should be held up to public ridicule.

A recent program on Discovery Channel – “Frozen Planet” – shows beautiful photography of the clearly melting poles, disruptions to the life cycle of penguins, and the misery of polar bears trying to cope with the unseasonal melting of their environments. Unbelievably, the reason – the scientific reason – for these changes is not being discussed. Why the omission? The program’s producer (reported by Brian Stelter in the NYT, April 21 2012), is quoted as saying that “including scientific theories would have undermined the strength of an objective documentary, and would then have become utilized by people with political agenda.  I feel that we are trying to educate mass audiences and get children involved, and we didn’t want people saying don’t watch this show because it has a slant on ‘climate change.'”  How can this program, which shows such devastating scenes, fail to mention the probable mechanism for the destruction and science supporting it?  And how does refusal to mention “scientific theories” qualify as education?  What’s going on here?

Consequences of man-made changes in the chemistry of the atmosphere result in changes in our energy balance with the sun that leads to climate change. This is “simple” physics that doesn’t need sophisticated computer work. Future impact is always uncertain.

But, if the climate change deniers have their way, by the time that we find out “for certain” whether the IPCC, NASA, GISS, the World-Bank, NSF and other credible organizations that issue detailed reports about the consequences of climate change, are right in every detail, most of the people who are now discussing these issues will be dead. Our children and grandchildren will live to face the consequences. Business -as-usual- scenarios have a high probability of leading to major disruptions that will lead to loss of life on a global scale -a self-inflicted genocide (see my first blog for a Webster definition).

We know what needs to be done to lower the probability of such consequences. We also know how long such a transition will take. Ignoring the issue for the reasons that the Discovery Channel producer used will lead to very dangerous, expensive and unnecessary inaction.