The Terrain Part 4: Spending – on Adaptation or Mitigation?

Posted on June 25, 2013 by climatechangefork

If we agree that we have to start spending money now, in order to minimize future damage from climate change, where should we start: on adaptation or mitigation – or is it a false choice?

Global mitigation seems to be frozen- or at least this can be said of its form as an international agreement to limit emissions of greenhouse gases through energy transition to more sustainable energy sources.  Attempts to adapt to future impacts of climate change seem to be on the rise, however, especially in light of the increasingly frequent need to adapt to extreme climatic events (mainly in urban environments). I summarized several of these efforts in the last few blogs – but do we need to change this trend, or continue it?

Adaptation is mostly local, in both its focus and its financing. This necessarily means that the rich can do much more than the poor. In a few days I am leaving to attend a conference in Mauritius. This is an isolated island in the Indian Ocean, about 2000km from the east coast of Africa. After my return, I will report the adaptation efforts of islands such as Mauritius in some detail. I will also try to show how they generate the resources necessary to finance these efforts. This is especially important, as in principle, if this generation of resources is unsuccessful, the poor will (quite literally) sink, while the rich surround themselves with protective walls to isolate them from the rest of the world. 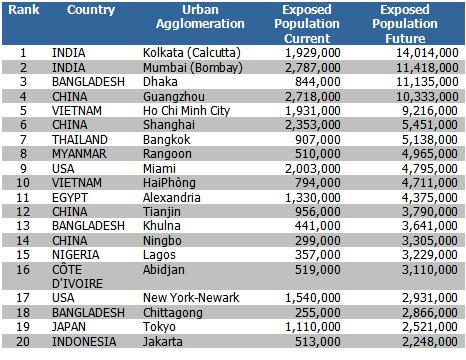 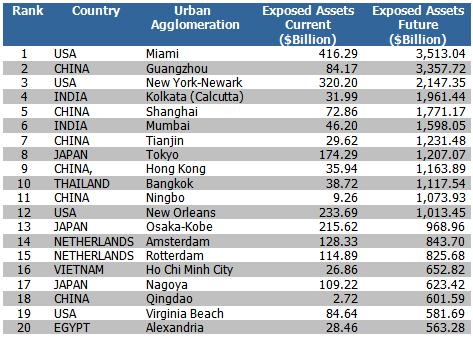 The two tables above show the top 20 cities ranked in terms of populations and property exposed to coastal flooding. Three out of the 20 are in developed countries in terms of population exposure and 9 out of the 20 in terms of exposed assets. Combining the figures for these top 20 cities, we see an estimated 24 million people exposed to severe flooding (equivalent to flooding zones). Out of these 24 million, 20 million live in what we currently consider developing countries. In the 2070s, the total population in these same cities and zones is estimated to reach 113 million people – out of which, more than 100 million will reside in what we now consider developing countries.

Micha Tomkiewicz, Ph.D., is a professor of physics in the Department of Physics, Brooklyn College, the City University of New York. He is also a professor of physics and chemistry in the School for Graduate Studies of the City University of New York. In addition, he is the founding-director of the Environmental Studies Program at Brooklyn College as well as director of the Electrochemistry Institute at that same institution.
View all posts by climatechangefork →
This entry was posted in Climate Change and tagged Adaptation, Climate Change, Developing Countries, Flooding, Global Warming, Kyoto Protocol, Mauritius, Mitigation, World Population. Bookmark the permalink.

1 Response to The Terrain Part 4: Spending – on Adaptation or Mitigation?