I’m Back – Some Notes on Iceland and Sustainable Energy

Posted on July 1, 2014 by climatechangefork

Well, it’s now July 1st, and I am back home from my combined vacation, family meeting and conference in Iceland. My jet-lag is still in full swing but not enough to freeze me out of the blog schedule. The conference in Iceland was productive; I copied the agenda in a previous blog (June 10, 2014). As is my usual habit after these conferences (July 16, 2012 – Seattle and July 2, 2013 – Mauritius), I was hoping to describe some of the highlights of the conference, as they directly relate to the host country. Unfortunately, I cannot do so in this case because the plenary lectures did not include discussions of the environmental or energy policies of Iceland. I got most of my information from a tour guide that helped us visit this beautiful country. Since Iceland is unique in being almost completely energized by sustainable energy, I have dedicated this to Iceland, despite its omission from the conference.

One of the most important topics in the conference (including my own contribution) was the availability and management of fresh water throughout the world. Iceland runs on water – both cold and hot. About 75% of its electricity is hydroelectricity, which is generated by water falls, while the other 25% of the power is generated by geothermal energy. 87% of the country’s heating and hot water are fueled by geothermal hot water and steam. Right now only about 19% of its primary energy comes from fossil fuels, and these are used primarily for transportation.

Iceland is a sparsely populated (325,000 people) volcanic island that borders the Arctic Circle. On arriving to Iceland on Thursday, June 26, we took a tour that started at 4pm and ended at midnight – it still wasn’t dark! While it probably wasn’t technically a 24 hour day, it certainly seemed like it was.

The country is located on the Mid-Atlantic ridge with about 200 volcanoes, many of them active, and there are three major glaciers that sit on top of some of these volcanoes. We all remember the eruption under Eyjafjallajökull (“glacier of Eyjafjöll”) in 2010 that disrupted air travel in northern Europe for several weeks; however that volcano is rather minor in Icelandic terms. In the past, eruptions of Eyjafjallajökull have been followed by eruptions of the larger volcano Katla. It is incredibly fortunate that there were no signs of an imminent eruption of Katla following the 2010 eruption.

Anybody that works on climate change knows that volcanic eruptions affect the climate significantly – mainly through the infusion of carbon and ash into the atmosphere. What was new to me was that our tour guide suggested that the continuous melting of the glaciers, as caused by climate change, actually increases the frequency of eruptions of volcanoes underneath the glaciers because of the corresponding reduced pressure on the volcanoes. After coming home I followed up on this and found some support for this theory in scientific literature.

Here are a few photographs to show the landscape: 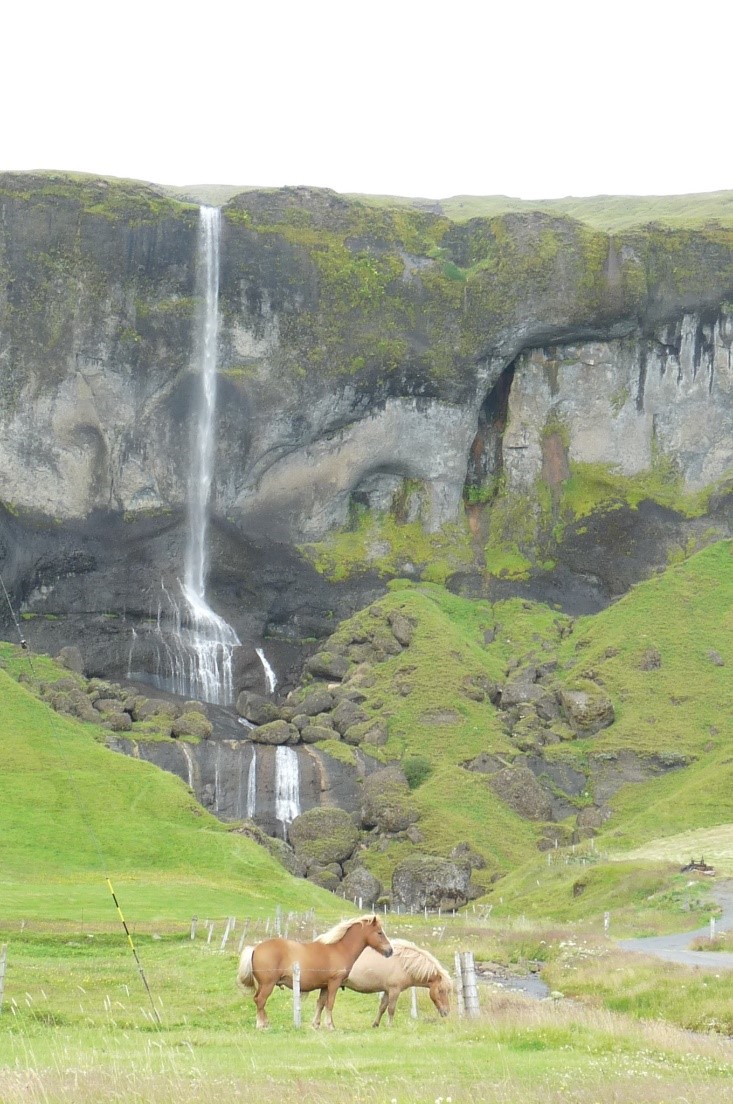 A “typical” waterfall in the background, with the famous Icelandic horses for scale 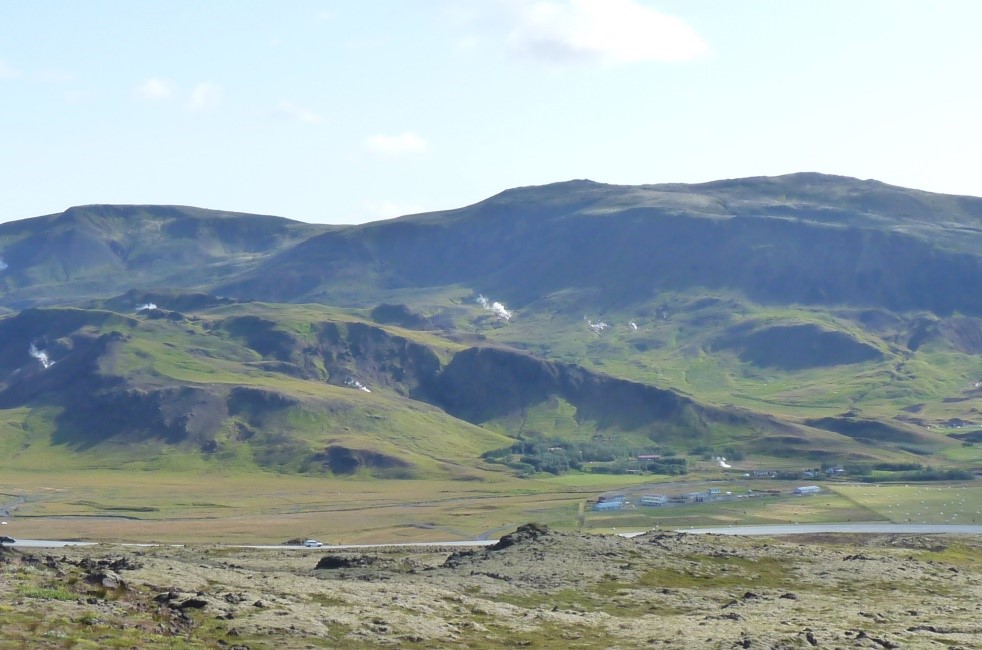 A “typical” landscape of the geothermal energy sources 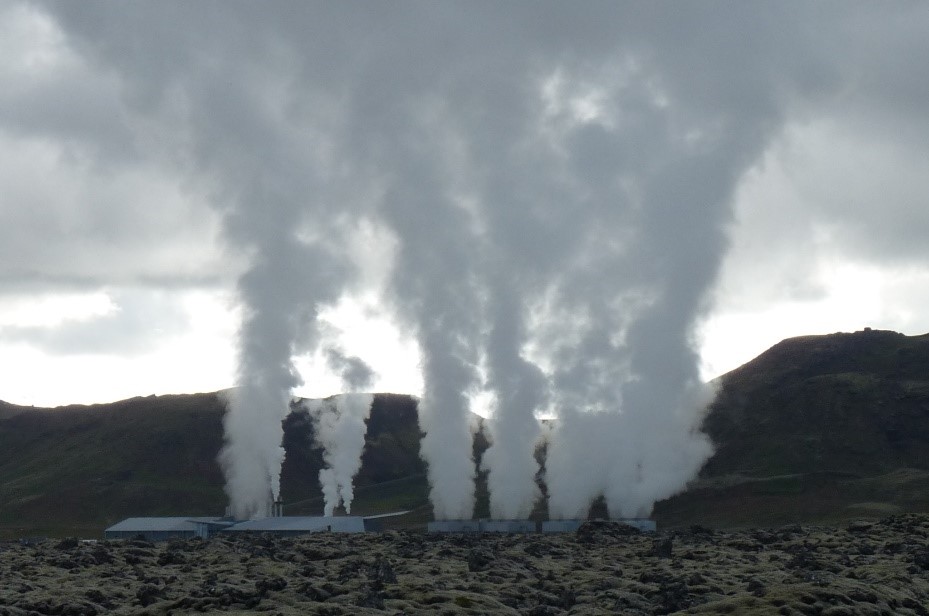 A close-up of the geothermal water well 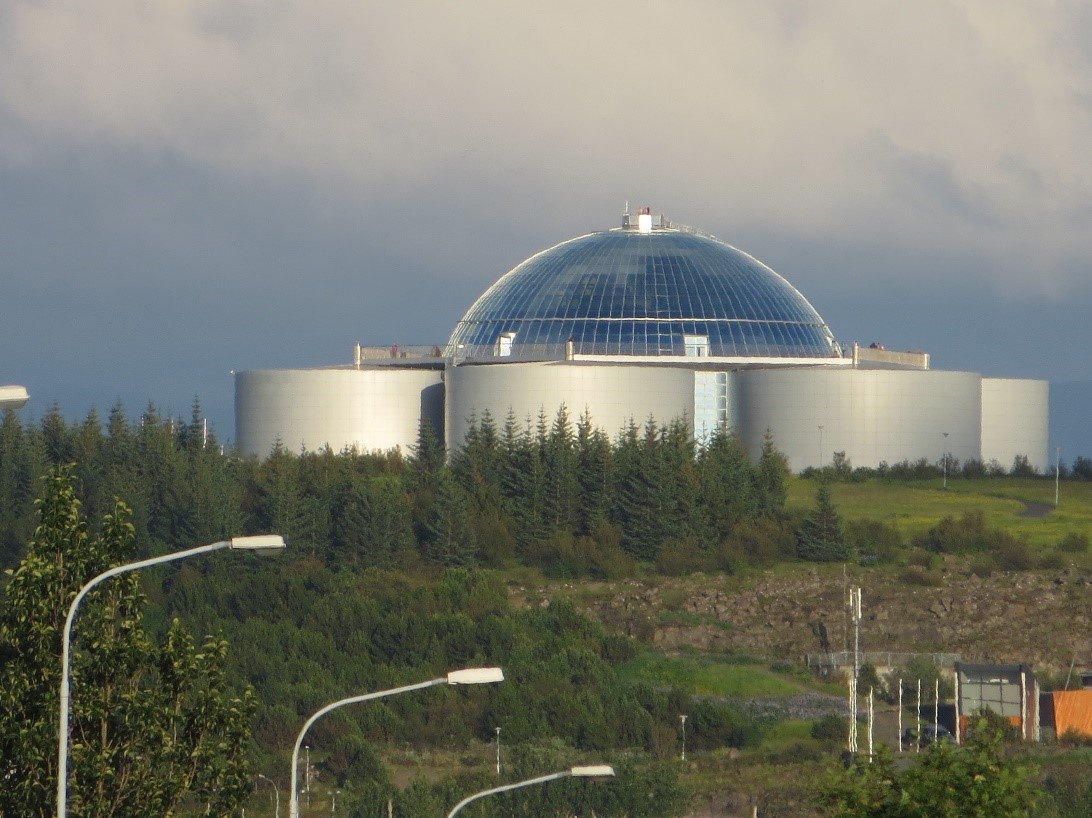 There is a large untapped reservoir of hydropower and geothermal hot water available, and saving energy is not presently on the agenda in Iceland. The country is exploring the option of exporting its sustainable energy to the British Isles through an undersea cable. Right now Iceland is using some of the excess available energy to power energy intensive industries such as aluminum smelting and silicon production.

The availability of sustainable energy is such that it is actually most profitable for the aluminum companies to transport the raw material (Bauxite) from Australia to be processed in Iceland.

The photographs also show that there aren’t many trees in Iceland. It was said (again, by the tour guide) that Iceland used to be covered with trees and vegetation, but unchecked sheep grazing and logging for fuel and building material caused a major erosion of the topsoil that made most of the land unable to sustain deep rooted vegetation.

I was hoping to be able to finish the blog with a statement that unlike some of the islands that I have covered after the Mauritius conference (July 2, 2013), Iceland doesn’t need to explore for fossil fuels on its continental shelf. However, whether it needs to or not, it seems to be doing just that.

Some of us are old enough to remember confrontations between Iceland and England in the 1950s and 1970s that became known as the Cod Wars. The confrontations were about fishing rights in the North Atlantic. The conflict ended in 1976 when the United Kingdom accepted the 200 nautical-miles as a fishery zone exclusive to the Icelandic. This 200 mile exclusion zone has now been accepted almost globally as an area in which the country can look for oil and gas reserves.