Yes We Can 3: The Alcohol Debate

Posted on November 25, 2014 by climatechangefork

This will be the last in the series of blogs on EROI that started with John Morgan’s guest blog (November 4). The set of data in all three blogs was based on a paper by Weißbach et al. that suggested an economic threshold below which sustainable energy sources cannot be used in the substitution of fossil fuel, thus calling into question the whole issue of a feasible energy transition to non-carbon-based energy sources. One of these sustainable energy sources is biomass, as exemplified by ethanol (drinking alcohol) fermented from corn. Its EROI value (buffered or un-buffered), as put forward in the Weißbach paper, was 3.5 – well below the stated economic threshold. I have decided to focus this blog on the debate around this value, which started as soon as the United States legislated a requirement to include a statement of the amount of alcohol in all automotive fuels being sold within the country.

Some of the characteristics of the alcohol (biomass in the figure) are not obvious, but they are both interesting and important in the climate change debate. Many of the characteristics, once the details are explored, also shed considerable doubts (at least in my mind) on the main EROI issues that we discussed in the last three blogs.

Why is biomass among the assortment of sustainable energy sources?

The burning of ethanol generates 6,743Btu per 1Lb of emitted carbon dioxide, while the burning of natural gas generates 8,751Btu for the same amount of emitted carbon dioxide – these figures are not much different yet one is regarded as sustainable while the other is regarded as a polluting fossil fuel. The reason for this is that the designation refers to the full cycle of production and burning. The ethanol is fermented from a biological crop grown annually; as with all plants, the corn uses a solar-powered photosynthetic process that sequesters the carbon dioxide from the atmosphere. The burning process returns the same amount of carbon dioxide to the atmosphere while releasing the stored energy. That means over the full cycle, the energy used actually all comes from solar energy, and presents no changes to the chemistry of the atmosphere.

In the case of natural gas, a similar process takes place – except that fossil fuels were formed hundreds of millions of years ago from the decomposition of dead plants and animals. This time lag completely separates the sequestration process from the combustion process, thus making it unsustainable.

If the energy that we use in the combustion of biomass comes from solar energy why it is not considered an intermittent source of energy like the other solar energy forms (solar PV, wind, solar CSP and hydro) which require storage (the difference between the buffered and un-buffered in the graph)?

This is an excellent question with a somewhat hazy answer. The main reason is that in a place like the United States the alcohol is made mostly by fermenting (bacterial digestion of the sugar) corn. Corn is also used to feed people and animals. This forms a tight connection between the food supply and the energy supply. In a sense, the food supply acts as the storage component of the energy supply. Unfortunately, it creates major issues for the food supply, which are especially notable since the majority of the world’s population is much more dependent on food supply than those who live in rich, developed countries such as our own. This brings us back to ancient times and the biblical story of how Joseph got to such a high position in the Egyptian hierarchy because of his ability to regulate the intermittency of the seven bad years and seven good years (I previously explored this in the context of fresh water supply in my April 8, 2014 blog).

The idea of using ethanol as a partial replacement for fossil fuels didn’t start because of awareness of climate change. As I have mentioned before (October 29, 2012), soon after World War II, it became evident that dependence on fossil fuels as the main source of energy would have to end sooner or later (remember the Hubbert Peak theory). The main reasons at that time were our finite supply and the limited reliability of foreign suppliers. So the thought was that it would be great to be able to grow our energy supply. This move would be especially great for the agricultural sector, which would be charged with increasing supply, thus giving them leave to raise prices and increase their profits. There were fierce debates that took place on this issue, many of which focused on the EROI that was calculated for this new energy supply.

The debate started following some EROI measurements that showed that it takes more fossil fuels to produce the same amount of energy that can be extracted from the ethanol – in other words, it’s an EROI smaller than 1. In 2002 the US Department of Agriculture (USDA) took its own measurements and summarized them in a report on the topic.

I am quoting three short introductory paragraphs from the report and including a detailed table that summarizes the results:

Ethanol production in the United States grew from just a few million gallons in the mid-1970s to over 1.7 billion gallons in 2001, spurred by national energy security concerns, new Federal gasoline standards, and government incentives. Production of corn-ethanol is energy efficient, in that it yields 34 percent more energy than it takes to produce it, including growing the corn, harvesting it, transporting it, and distilling it into ethanol.

Growth in ethanol production has provided an economic stimulus for U.S. agriculture, because most ethanol is made from corn. The increase in ethanol demand has created a new market for corn, and agricultural policymakers see expansion of the ethanol industry as a way of increasing farm income and reducing farm program payments, while helping the U.S. economy decrease its dependence on imported oil. Increasing ethanol production induces a higher demand for corn and raises the average corn price. Higher corn prices can result in reduced farm program payments.

Today’s higher corn yields, lower energy use per unit of output in the fertilizer industry, and advances in fuel conversion technologies have greatly enhanced the energy efficiency of producing ethanol compared with just a decade ago. Studies using older data may tend to overestimate energy use because the efficiency of growing corn and converting it to ethanol has been improving significantly over time. The estimated net energy value (NEV) of corn ethanol was 21,105 Btu/gal under the following assumptions: fertilizers are produced by modern processing plants, corn is converted in modern processing facilities, farmers achieve normal corn yields, and energy credits are allocated to coproduces.

The table is long and detailed, but I think that it is crucial to gaining some understanding of the complexity and subjectivity involved in the calculations of a concept such as EROI before accepting claims that such calculations prove or disprove the viability of doing things that we regard as essential. 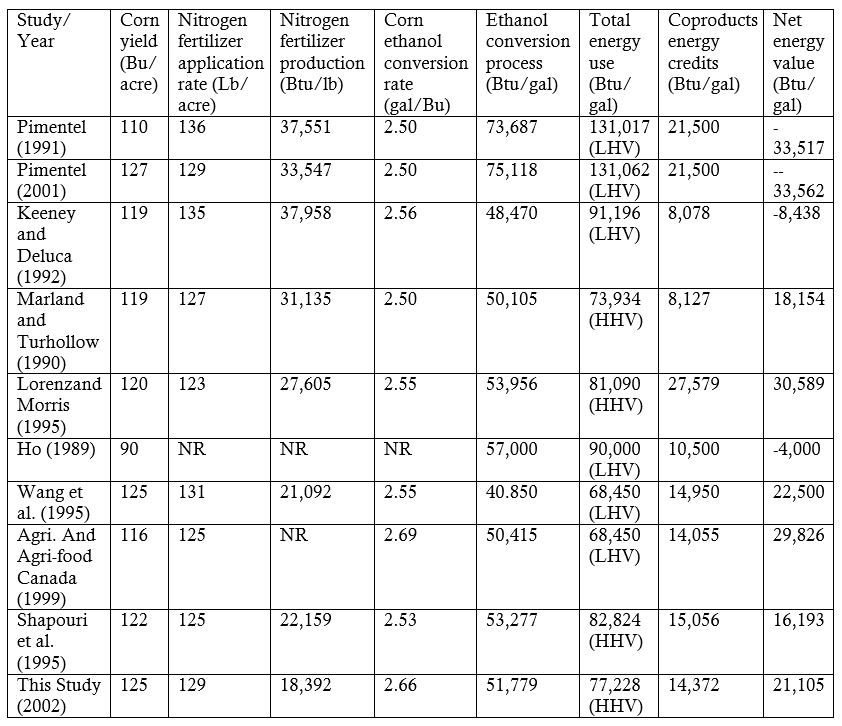 Summary of abbreviations in the table: LHV-Low Heat Value, HHV – High Heat Value (the difference between LHV and HHV is often a source of confusion and it originates with exclusion or the inclusion of the water vaporization energy in the process; the difference amounts to about 10% in most cases), Bu – bushel, NR – not reported.

The debate started to have a wider audience after Congress passed the Renewable Fuel Standard (RFS) law in 2005. Here is how the EPA summarized this law and the mandated steps to be taken:

EPA is responsible for developing and implementing regulations to ensure that transportation fuel sold in the United States contains a minimum volume of renewable fuel. The Renewable Fuel Standard (RFS) program regulations were developed in collaboration with refiners, renewable fuel producers, and many other stakeholders.

The RFS program was created under the Energy Policy Act (EPAct) of 2005, and established the first renewable fuel volume mandate in the United States. As required under EPAct, the original RFS program (RFS1) required 7.5 billion gallons of renewable- fuel to be blended into gasoline by 2012.

I am attaching the key figure from this article below. 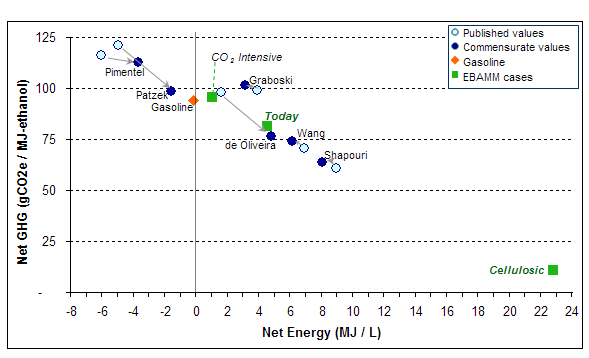 Net energy and net greenhouse gases for gasoline, six studies, and three cases. (B) Net energy and petroleum inputs for the same. In these figures, small light blue circles are reported data that incommensurate assumptions, whereas the large dark blue circles are adjusted values that use identical system boundaries. Conventional gasoline is shown with red stars, and EBAMM scenarios are shown with green squares…

A few months later (June 23, 2006 – Vol. 312) an extensive comments section which focused on the article appeared in the magazine. The comments included both the issue of the competition with the food supply that I mentioned earlier and EROI calculations. Farrell et al. calculated the EROI of ethanol from corn as 1.2. This value means that the use of ethanol as an energy source leaves a replacement value of about 20% for other uses of fossil fuels aside from running the production of ethanol. This value was in agreement with the value that the Department of Agriculture quoted earlier and remains the most quoted value until today. The value that was given in the Weißbach paper, on the other hand, is 3.5.

These two values are not the end of the story. If you google the term “ethanol fuel,” you will find a Wikipedia entry that provides us with the following table: 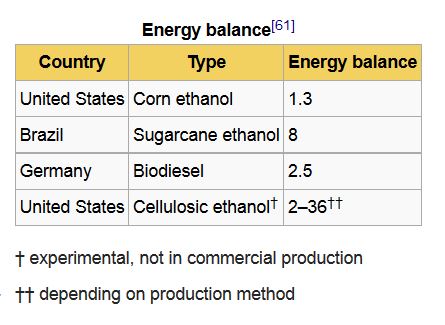 These values are taken from an October 2007 article in National Geographic (“Green Dreams: Making fuel from crops could be good for the planet—after a breakthrough or two”; Joel K. Bourne, Jr., Robert Clark; National Geographic Magazine October 2007 p. 41). Everybody now realizes that the future of biomass – both in terms of the EROI and its disconnect from the food – supply rests in fermentation from cellulosic ethanol, which is defined as “biofuel produced from wood, grasses, or the inedible parts of plants.”

In the meantime, Happy Thanksgiving – I appreciate your continued readership.

4 Responses to Yes We Can 3: The Alcohol Debate