COP21 and Paris – Evaluation of Commitments

Posted on November 17, 2015 by climatechangefork

Two weeks ago, through this blog, I was “on my way” to Paris. I wish I could actually be there (see the last two paragraphs for my sentiments on Friday’s terrorist attack and its ramifications); I like the city, I have family there, and at the end of the month the city will host what is perhaps the most anticipated climate change conference ever – COP21. I cannot be there physically because I have teaching responsibilities here that can’t be pushed aside. Meanwhile, I have asked my family in Paris to observe their surroundings and write a guest blog on the general atmosphere that accompanies the conference. I have also told my students that the second part of the semester and the final exam will focus on the conference. This blog will be one of the background materials they rely on, along with class discussions and media coverage. I have articulated that they should not take everything that they read at face value, instead requesting that they analyze the conference’s progress and conclusions on their own, based on the tools that they have acquired in class.

The November 3rd blog included short summaries of the commitments from the world’s 10 largest carbon emitters. You can read the full commitments of all 134 participating countries on the UNFCCC site. China’s full commitment includes 14 pages written in Chinese as well as a 20 page English translation. The US commitment meanwhile, consists of 5 pages, along with a referral to the EPA (Environmental Protection Agency) site for full details. In most cases, the countries provide not only their direct commitments but also an up-to-date status report of their economic activities, aspirations for economic growth, population, and energy use. Such information is vital to building accurate scenarios upon which the commitments rest.

Recently, analyses of the sum of the total commitments, and thus their global implications, started to appear throughout the press and on the net. Here are few examples:

A recent IEA (International Energy Agency) report warns that as they stand, the commitments to the UNFCCC will not be enough to achieve the target of limiting the temperature change to below 2o C – the number that many international organizations have aimed for.

Further underscoring that point, the Joint Research Center of the European Commission came out (October 27, 2015) with the following attention-grabbing headline: “Current climate commitments would increase global temperature around 3° C.” Fortunately, in spite of its title, the report itself presents a much more optimistic and balanced picture:

JRC analysis finds that submitted INDCs on climate policy can put the world on a path to reduce emissions in a more anticipated manner compared to current policies. Unconditional INDCs would lead to 56.6 GtCO2e in 2030 (excl. sinks; +17% 2010 with 42.2 GtCO2e) while conditional INDCs combined would lead to a clear peak shortly before 2030 at 54.0 GtCO2e (+12% vs. 2010). These scenarios, if extended to 2050, would already cover 30% to 44% of the emissions reductions needed to remain below a 2 °C temperature increase.

The following scenarios were modelled:

The 120 countries that submitted INDCs as of October 13 2015 represented 88.0% of global GHG emissions in 2010 (excluding world bunkers; metrics using World Resources Institute’s CAIT WRI 2014). Most of the INDCs were used in the modelling (see Table 1 in Annex).

Global emissions continue to rise in the Reference scenario throughout 2050, whereas the implementation of INDCs and a prolonged effort after 2030 result in curbing emissions and a peak in 2035 (INDC-low) or 2030 (INDC-high). The emissions in the two INDC scenarios result in a global temperature increase of around 3 °C.

The decrease of emissions intensity per unit of GDP marks a break from the historical trend (-1.8%/year) in all climate policy scenarios:

The aggregate level of ambition of the INDCs by 2025 and 2030 thus represents a significant deviation from historical trends and will require efforts to implement current and new policies. This will mean a significant transformation of the energy sector and land use policies.

Nevertheless, emissions in both INDC scenarios are above least-cost pathways to limit the global temperature increase below 2 °C (illustrated by the Global Mitigation scenario). 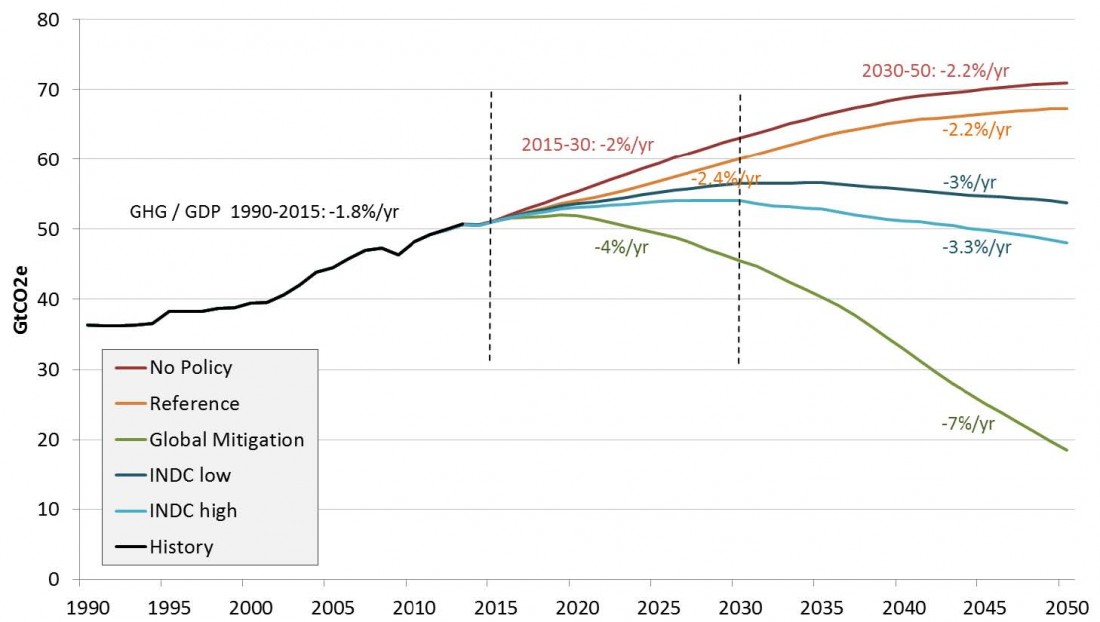 The total emissions in 2030 are 3.5 GtCO2e lower in the INDC-low versus the Reference case, and conditional INDCs lead them 2.5 GtCO2e lower. The majority of emissions reductions are achieved in the power sector (51% from Reference to INDC-high), followed by CO2 in other energy sectors (19%), non-CO2 greenhouse gases in energy and industry (13%), non-CO2 in agriculture (11%) and CO2 in LULUCF (6%; the effect of sinks10 has not been taken into account ).

For educational purposes, the most interesting part of this summary is the attached Annex 2 that lists all of the references that they have used for the analysis. 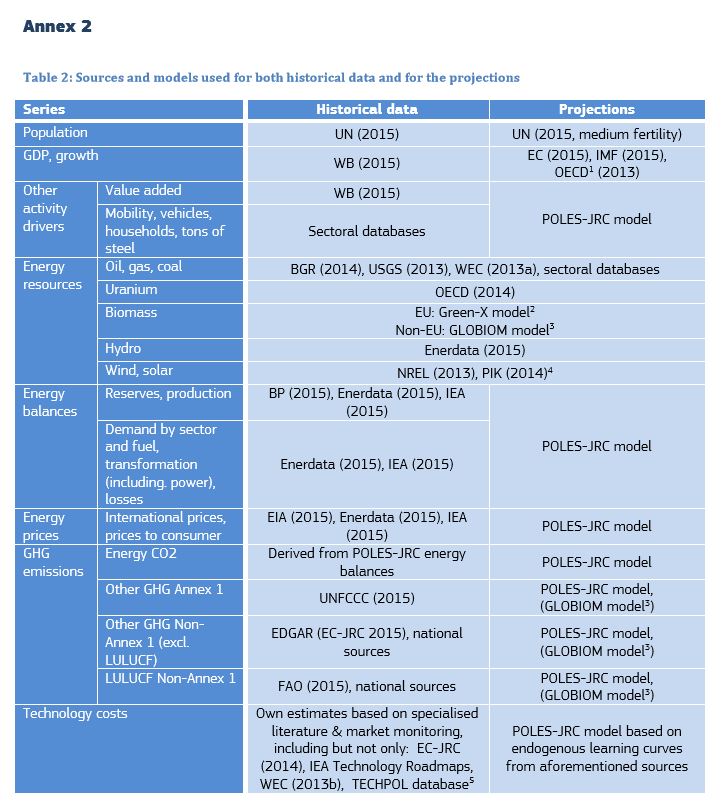 The UNFCCC has its own summary and analysis of the commitments which I’m sure I will refer to often. Presently, however, I find the JRC European Commission analysis much more transparent and useful for demonstration purposes, which is why I have referenced it more recently. See, for example, the following excerpts that I included in the November 3rd blog:

The submission of the target by the United States was made on the assumption that other Annex I Parties, as well as more advanced non-Annex I Parties, would, by 31 January 2010, associate with the Copenhagen Accord and submit mitigation actions for compilation into an information document in accordance with paragraph 4 or 5 of the Accord, as the case may be. USA

China stated that the above-mentioned autonomous domestic mitigation actions are voluntary in nature and that they will be implemented in accordance with the principles and provisions of the Convention, in particular Article 4, paragraph 7. The Party also stated that its communication is made in accordance with the provisions of Article 12, paragraphs 1(b) and 4, and Article 10, paragraph 2(a), of the Convention. China

None of the commitments at this point are binding. US Secretary of State John Kerry emphasized this point on November 11th, when he stated that whatever decisions are made at the COP21 meeting cannot be implemented like a treaty because they have no chance of being ratified by the US Senate. The response that he got from the international community at large was that while that may be true, the decisions cannot be treated as hot air either.

Another issue that needs to be followed closely is that the negotiations are being conducted by states, and sometimes states don’t tell the full truth. One relevant example is the recent finding that China has been seriously underreporting the extent of its coal use. Since right now all the emissions accounting is done by the states themselves, what is needed is an independent audit. Today’s technology makes that possible and I will cover it in future blogs.

I was about to finish writing this blog on Friday, November 13, when I got a phone call from my family in Paris telling me about the shooting in their neighborhood and reporting that there was an overwhelming police presence everywhere they looked. At that time they had no idea what was going on in the rest of the city but asked me not to call because they were going to sleep (it was 9:30pm there). I stopped my writing and started to follow the news. It was quickly obvious that a major terrorist attack was taking place all over Paris and one of the most deadly focal points was a popular Cambodian restaurant just a few minutes’ walk from their apartment. By the time it was all over, 129 people were counted dead and a few hundred more were injured – 99 of them critically. This was one of the worst attacks in Europe since the Second World War.

There is probably no direct causal connection between the terrorist attack and the upcoming COP21 meeting there in less than two weeks, but there is no question in my mind that the attack will have a direct impact on the meeting itself. We will all keep our eyes open to monitor how the attack affects the Paris meeting and will try to analyze the consequences of that impact.