Posted on May 9, 2016 by climatechangefork

Last week I promised to delve more into the Pew Research Center’s trove of data on science and society, but a few things happened whose response took precedence.

One was the narrowing of the Republican field of candidates to Donald Trump. The other element that caught me off guard was the New York Times Magazine’s interview with President Obama, in which he reviewed his success in managing the American economy over the last seven years.

I’ve always had the impression (not properly researched) that one can come up with almost any ideology in the US and find at least a million adherents. The US is a good example of a country that can prosper and function reasonably well with such pluralism – so long as it is kept within the law.

Well, this presidential election provides an opportune test of that theory. Two presidential candidates that are still running, Donald Trump and Bernie Sanders, present a certain challenging novelty for the desired office. I was interested to find out the secret to their success.

The primary vote for Donald Trump in the Republican primaries, as of 4/27/16 is more than 10 million. That is more than Romney earned in the entire 2012 primary season. In fact, Trump is projected to set a record for number of primary voters once the contests end on June 14th. For Clinton, the corresponding number of voters so far is more than 12 million; for Sanders, it is over 9 million.

The number of eligible voters in the 2012 Presidential Election was more than 235 million. Even assuming a 55% turnout, that means close to 130 million voters.

Both Trump and Sanders significantly exceed my estimate of one million of followers but they are as yet well short of a presidential win. Bernie Sanders is close to mathematical elimination as a candidate but Donald Trump is almost certainly going to end up as one of the two candidates that more than 200 million eligible voters must choose between. I have found the press to be baffled as to the secret of both Trump and Sanders’ success. The key phrase that floats around as a possible explanation is protest vote. Protest against what? Protest votes are not new. In fact, Germany was a fertile ground for voters protesting the country’s loss in WWI, the reparations they had to pay, and the ineptitude of the Weimer government. This was part of what led to Hitler’s rise to power.

The degree of polarization surrounding both candidates is astounding. Here is an example taken from a New York Times letter to the editor:

An Outlier at Harvard: ‘I’m a Hillary Supporter’

Re “Daring to Back Clinton” (Metropolitan section, April 17), about the isolation felt by Columbia students who support Hillary Clinton:

At the age of 12, I canvassed for Senator Barack Obama’s 2008 presidential campaign. At the age of 18, I organized several Black Lives Matter protests. And at the age of 20, my peers consider me conservative.

Over this time, my political beliefs have remained unchanged. I still support entitlements, loathe mass incarceration, advocate for L.G.B.T.Q. rights, and believe in the government’s power to improve lives and create sweeping change. This ideology makes me a Democrat in the vein of Barack Obama, Jed Bartlet (“West Wing”) and even Mrs. Clinton. But on my college campus, I might as well be Pat Buchanan.

At Harvard, admitting that #ImWithHer is nearly tantamount to boasting “Make America Great Again.” If you haven’t shared a post from the writer and activist Shaun King, you are not a true liberal here.

When defending Mrs. Clinton becomes as unacceptable as bigotry, when her supporters are called privileged, oppressive and stupid, we lose the central feature of our democracy — pluralism.

Indeed, by surrounding themselves with only those who share their narrow set of political beliefs, the students who make up the liberal base on college campuses perpetuate the very oligarchical traditions they lament.

I’m a Hillary supporter. In their eyes, I might as well be a College Republican.

The writer is op-ed editor of The Harvard Crimson.

This summer I will visit France where I have friends and family. I will be staying near Place de la Republic, which is currently the center of global attention for its ongoing protests. The age group represented in these protests is similar to the one that makes up so much of Bernie Sanders’ support here. But the source of protest there is a bit more transparent than that here. The French government wants to change the rules for hiring and firing workers and the protesters vehemently oppose such changes. In France these kind of protests have a history of success. Nor is the protest confined – to either France or the US – it has spread all over Europe (March 8, 2016 blog) bringing all kinds of players to the forefront.

Can we hope to have a similar success?

The closest thing to expressing the idea of a protest vote in numbers is a parameter called the Misery Index, which is shown in Figure 1 below. The index is calculated by simply adding the annual inflation rate and the seasonally adjusted unemployment rate. The chart below includes inflation, unemployment, the misery index, and who was president at the time. 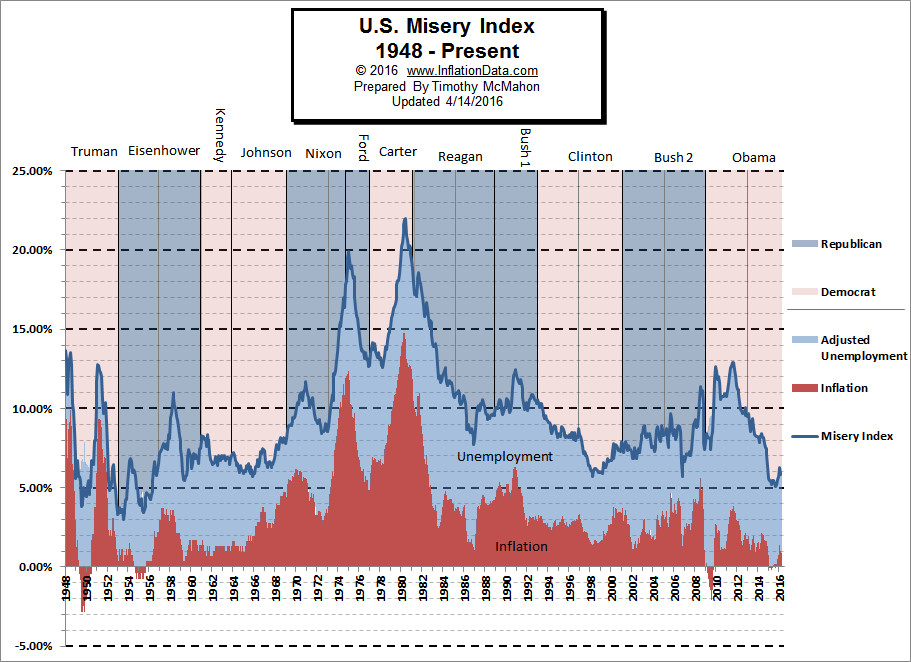 In Figure 2 we use info from the Pew Research Center to find the opinion of the American People on the topic:

Essentially, the Democrats consistently think that the economic conditions are pretty good while the Republicans disagree.

Donald Trump and Bernie Sanders both repeatedly bemoan that we are losing industrial jobs to other countries. This turns out to be very effective rhetoric in the industrial heartland of the country. Here is what Joseph Stiglitz has said about it:

“The observation is uncontroversial,” said Joseph Stiglitz, the Nobel winning economist at Columbia University. “Global employment in manufacturing is going down because productivity increases are exceeding increases in demand for manufactured products by a significant amount.”

Fortunately, this week, NY Times Magazine has published an extensive interview with President Obama giving him opportunity to defend his economic record. Here are some key paragraphs of what he had to say:

“I actually compare our economic performance to how, historically, countries that have wrenching financial crises perform,” he said. “By that measure, we probably managed this better than any large economy on Earth in modern history.”

“Many are still barely getting by,” Hillary Clinton said, while Donald Trump said that “we’re a third-world nation.”

“I mean, the truth of the matter is that if we had been able to more effectively communicate all the steps we had taken to the swing voter,” he said, “then we might have maintained a majority in the House or the Senate.”

“If you ask the average person on the streets, ‘Have deficits gone down or up under Obama?’ probably 70 percent would say they’ve gone up,” Obama said, with some justifiable exasperation — the deficit has in fact declined (by roughly three-quarters) since he took office, and polls do show that a large majority of Americans believe the opposite. There are, of course, many reasons so few Americans seem to be celebrating. “How people feel about the economy,” Obama told me, giving one part of his own theory, is influenced by “what they hear.” He went on: “And if you have a political party — in this case, the Republicans — that denies any progress and is constantly channeling to their base, which is sizable, say, 40 percent of the population, that things are terrible all the time, then people will start absorbing that.”

But as Obama also acknowledged, the public anger about the economy is not without empirical basis. A large swath of the nation has dropped out of the labor force completely, and the reality for the average American family is that its household income is $4,000 less than it was when Bill Clinton left office. Economic inequality, meanwhile, has only grown worse, with the top 1 percent of American households taking in more than half of the recent gains in income growth. “Millions and millions and millions and millions of people look at that pretty picture of America he painted and they cannot find themselves in it to save their lives,” Clinton himself said of Obama’s economy in March, while on the campaign trail for his wife.

I fully agree with the President’s conclusion. When 40% of the population is constantly shouting disaster, it sticks. The Pew Research data in Figure 2 backs the president. The protest on the macroeconomic scale is a perception that was politically ingrained. The individual protests that come out of job displacement are real, but to my knowledge, such votes do not form the backbone of either the Trump or the Sanders campaigns.