Posted on August 9, 2016 by climatechangefork

I am finishing writing this blog on Sunday, even though I had a draft ready yesterday. As I read the New York Times today, I came across Nicholas Kristof’s Op-Ed,  “Clinton’s Fibs vs. Trump’s Huge Lies.” It coincided almost exactly with my planned theme for this week.

ONE persistent narrative in American politics is that Hillary Clinton is a slippery, compulsive liar while Donald Trump is a gutsy truth-teller.

Over all, the latest CBS News poll finds the public similarly repulsed by each candidate: 34 percent of registered voters say Clinton is honest and trustworthy compared with 36 percent for Trump.

Yet the idea that they are even in the same league is preposterous. If deception were a sport, Trump would be the Olympic gold medalist; Clinton would be an honorable mention at her local Y. 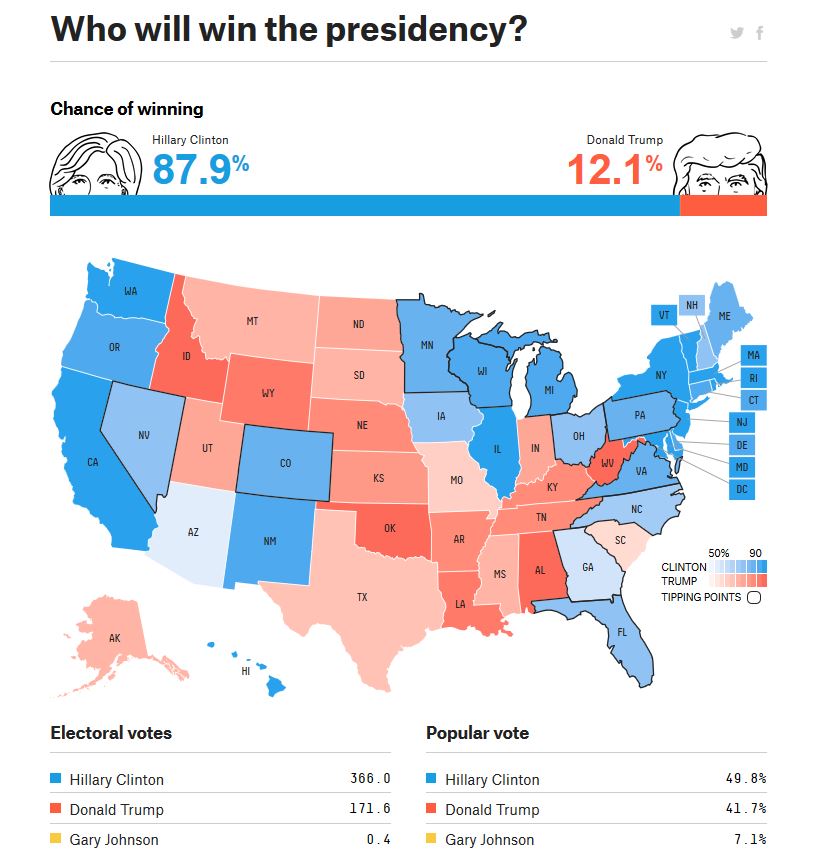 Nate Silver is my favorite polling guru and his organization updates its polls on a daily basis. He and others are warning that the current polls may change drastically in a few weeks, once the convention bounces decay and polls become more stable. The Olympics in Rio started on Friday and our collective attention will be glued to the games, which provides an excellent opportunity to freeze these results for a few more weeks. Meanwhile, Donald Trump will likely do something that increases the population’s reluctance to support him as the next president of the United States.

Over the past few days, Trump has destroyed this middle ground. He’s exposed the wet noodle Republicans as suckers, or worse. Trump has shown that he is not a normal candidate. He is a political rampage charging ever more wildly out of control. And no, he cannot be changed.

He cannot be contained because he is psychologically off the chain. With each passing week he displays the classic symptoms of medium-grade mania in more disturbing forms: inflated self-esteem, sleeplessness, impulsivity, aggression and a compulsion to offer advice on subjects he knows nothing about.

His speech patterns are like something straight out of a psychiatric textbook. Manics display something called “flight of ideas.” It’s a formal thought disorder in which ideas tumble forth through a disordered chain of associations. One word sparks another, which sparks another, and they’re off to the races. As one trained psychiatrist said to me, compare Donald Trump’s speaking patterns to a Robin Williams monologue, but with insults instead of jokes.

I have no idea if Brooks is a registered Republican but he is certainly the most right-of-center Op-Ed writer for the NYT so his words as to the qualifications of the Republican candidate should count.

To top it all off, there have been reports about Trump’s intention to use nuclear weapons:

“I’ll be very careful here,” the MSNBC host said, before passing along some hearsay. “Several months ago, a foreign policy expert on an international level went to advise Donald Trump, and three times he asked about the use of nuclear weapons. Three times, [Trump] asked — at one point, ‘If we have them, why can’t we use them?'”

This is really scary.

Yet, in spite these prospects, a recent letter to the New York Times immediately following the conventions presented the following perspective:

As a Sanders supporter, I will not be voting for Hillary. At this point, I’m left deciding between Gary Johnson and Jill Stein, who, like Bernie, were both actually against the Iraq war before it started.

Or, perhaps, just staying home. I am not alone. The two major candidates are the least popular in history, and the biggest reason their supporters give for voting for them is that they aren’t the other one.

I’m resigned to having a terrible president starting next January, but there’s no way I’ll be responsible for electing him or her.

The American Presidential elections are, by and large, a binary process. The last third party presidential candidate to win a national election was Abraham Lincoln in 1864. He ran against John Frémont (Republican) and George McClellan (Democrat). It’s a much more frequent phenomenon for third party candidates to attract a little more than 5% of the votes, thus becoming a major factor in a main party candidate’s winning or losing an election.

In terms of outcome, there is not much difference between voting for Gary Johnson or Jill Stein – or even joining the 100 million eligible voters (March 22, 2016) that abstain. In my book, if you are eligible to vote and decide not to vote, you give up your right to complain.

All of this brings me to my main reason for writing this blog. Why, in spite of all the evidence, do so many people – including the letter writer – rank their dissatisfaction with both candidates on the same level?

I have enumerated the reasons for not wanting Donald Trump to be president of the United States. What about Hillary Clinton?

By almost everybody’s admission, we have never had a presidential candidate with better qualifications. Of course, she is the first woman to be nominated by one of the two major parties, and it is possible that, as a nation, we are not yet ready for a woman president, regardless of her credentials. When directly polling for that, however, almost everybody denies that her gender is the dominating reason for disliking her candidacy. As Kristof mentioned, the vast majority cite her likability, honesty, and trustworthiness as the main reasons. Here is what the Washington Post writes about it:

Now, compare those numbers to what I believe was the single most important question in the 2012 exit poll. Of the one in five voters who said a candidate who “cares about people like you” was the most important trait in deciding their vote, Obama beat Mitt Romney 81 percent to 18 percent. The election was, literally, won the backs of people who felt that Obama “got” them in a way Romney did not. If Clinton has a likability problem, Trump has a likability epidemic.

That same March Post-ABC poll showed just 30 percent of respondents felt favorably toward Trump while 67 percent had an unfavorable view — including a stunning 56 percent who felt “strongly” unfavorably toward the real estate mogul. (Clinton’s numbers were 46 favorable/52 unfavorable.) Just one in four (27 percent) said that Trump was honest and trustworthy. Twenty six percent said Trump understood the problems of people like them; 26 percent also said he had the right experience to be president.

We can try to quantify this concept by summarizing a recent NBC/WSJ poll of “feelings” toward the candidates:

Now I’m going to read you the names of several public figures, groups and organizations, and I’d like you to rate your feelings toward each one as very positive, somewhat positive, neutral, somewhat negative, or very negative. If you don’t know the name, please just say so. (RANDOMIZE EXCEPT BARACK OBAMA)

The table below shows the relevant answers.

My own question is this: both Clinton and Trump scored low numbers in the positive/very positive categories, but the query was incredibly broad; what are the metrics here – to whom are they being compared? Given that Clinton and Trump are the two major party candidates, logic would dictate that the follow-up question ought to ask people to compare them against each other. As it stands, the way that the question is being asked doesn’t require any such assessment. Instead, we can only infer that each responder is comparing them to his or her ideal candidate. That is not a particularly helpful metric.

Going forward, I’ll be alternating between a continued discussion of my vacation and a looking at polling practices – including their use (or exclusion) of reference points and the potential ways in which the candidates can play the pollsters.