Posted on November 29, 2016 by climatechangefork

Last week I posted a figure from the Economist that summarizes how various constituencies voted in the American presidential elections. I promised I’d focus on some of the non-racial factors that made a significant impact on the results. Let’s look at the aspect of college education.

Disregarding gender here, the message from these data is obvious: college education of white voters was a clear and decisive contributor to the outcome. Since I am a professor at the City University of New York, I feel a personal responsibility for this indicator. Rather than color code the country into blue or red sections, I’d prefer to work on filling some of the educational gaps we have when it comes to democratic prerequisites – including how to elect governments that will focus on a better future for our children and grandchildren in an ever more complicated world.

In academia, we require students to complete certain prerequisite courses before they are allowed to register for more advanced studies. This is meant to ensure that the students have acquired necessary skills, without which they would not be able to follow the course material. For instance, if you want to take an introductory course in physics you must first prove that you have the math skills that will enable you to actually work with the material covered in the class. When we vote for President of the United States or for any other office, the only prerequisite is that you be eligible to vote. This is determined by your citizenship and your age, provided that you are not a convicted felon. Education of any sort is not a requirement. I am not here to advocate that such restrictions should be put into place: this was tried before with disastrous consequences. However, technology is now opening doors to better inform the general public about issues that they are being asked to vote on.

I have been writing this blog for more than four years, with the express purpose of contributing to this effort: I reach more people through this blog than I do when you simply count my students at my paying job. Recently, I wrote a series of blogs (May 24 – June 14) dedicated to efforts to prepare the voting public for the governance issues that are specific to the new era in which humanity dominates the physical environment: the Anthropocene. The existence of the Anthropocene itself was not on the ballots so people could not vote against it. Instead, they elected people who essentially tried to convince them that its contributors – globalization, automation, and immigration that directly requires economic dislocation – are largely conspiracies that can be ignored. That attitude, combined with global changes in communication gave rise to an epidemic of false news. In many cases people didn’t have the criteria or resources to differentiate fact from fiction.

David Leonhardt, in his recent New York Times Op-Ed, describes education’s role in our ability to respond to economic changes. He also mentions one state governor that is trying to do something about it:

It’s the sort of devastation that now has the country’s attention. Donald Trump won the presidency with huge margins in places left behind. He lost the popular vote, but won 26 of the 30 lowest-income states, including the old powerhouses of Pennsylvania, Ohio and Michigan.

These places are stuck in what I call the Great American Stagnation. Tens of millions of people have experienced scant progress for decades. Median net worth is lower than in the 1980s, and middle-aged whites, shockingly, aren’t living as long as they used to. Ending this stagnation is the central political problem of our age: It fuels Trumpian anger and makes every other societal problem harder to solve.

In the wake of the financial crisis, Delaware’s new governor, Jack Markell, and other officials did obvious things, like using stimulus money to stem the damage and even managing to reopen the refinery. But Markell, who’d run as an insurgent Democrat, understood that nostalgia alone wouldn’t help families pay their bills. So he began looking for ways both to save old jobs and to create new ones. His answer wasn’t original — but that’s O.K., because it was right.

In his almost eight years in office, he has made his No. 1 priority lifting the skills of Delaware’s citizens. He worked on traditional education, expanding high-quality pre-K and helping low-income teenagers go to college. And he worked on what academic researchers like Robert Schwartz call “the forgotten half”: the many students who won’t graduate from college but who also need strong skills to find decent jobs. Their struggles are a major reason that America’s work force is no longer considered the world’s most highly skilled.

The tens of millions that Leonhardt is refering to fit within Hillary Clinton’s “deplorables” label – many through no fault of their own. They didn’t take that well and went to the polls to express their displeasure – even though in many cases that seemed to mean voting against their own interests.

A map of college education in the United States is shown in Figure 2. 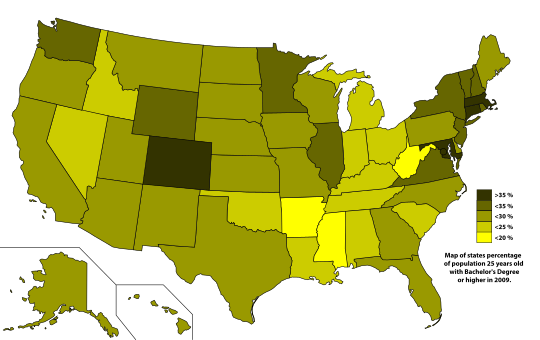 Ali Zifan – Own work; Map is based on https://commons.wikimedia.org/wiki/File:Blank_US_Map_(states_only).svg.

Figure 2 – A map of educational attainments in the US.

The states range between less than 20% tertiary education attainment (college graduation) and more than 35%. Here’s a more in-depth breakdown.

The next question to ask is how we are doing compared to other countries. Table 1 shows data selected from several large countries – both developed and less developed ones.

We can see that the United States’ level of tertiary education is one of the highest among rich countries. This is also true if one delves more into details such as the variation between different age groups. Those levels are much lower in developing countries. Like most other socio-economic indicators, we have long way to go in accomplishing educational prerequisites globally.

The remedy – at least in terms of top priorities – is probably not to significantly enlarge college education levels. But it is urgent that we extend other educational opportunities to the more than half of the voting population not served by the college system structure.

The City University of New York, where I work, was originally set to address these issues:

The City University of New York (CUNY; pron.: /ˈkjuːni/) is the public university system of New York City, and the largest urban university in the United States. CUNY and the State University of New York (SUNY) are separate and independent university systems, although both are public institutions that receive funding from New York State. CUNY, however, is additionally funded by the City of New York. The university has one of the most diverse student bodies in the United States, with students hailing from 208 countries. The black, white and Hispanic undergraduate populations each comprise more than a quarter of the student body, and Asian undergraduates make up 18 percent. Fifty-eight percent are female, and 28 percent are 25 or older.[5]

CUNY has served a diverse student body, especially those excluded from or unable to afford private universities. Its four-year colleges offered a high quality, tuition-free education to the poor, the working class and the immigrants of New York City who met the grade requirements for matriculated status. During the post-World War I era, when some Ivy League universities, such as Yale University, discriminated against Jews, many Jewish academics and intellectuals studied and taught at CUNY.[7] The City College of New York developed a reputation of being “the Harvard of the proletariat.”[8]

The problem is that with time, the focus has shifted more toward the “Harvard” part of that title, while neglecting the “proletariat.” For the crucial sake of good governance we – and countless other institutions across the country have to find a way to make a U-turn back in the direction of the general public.

Micha Tomkiewicz, Ph.D., is a professor of physics in the Department of Physics, Brooklyn College, the City University of New York. He is also a professor of physics and chemistry in the School for Graduate Studies of the City University of New York. In addition, he is the founding-director of the Environmental Studies Program at Brooklyn College as well as director of the Electrochemistry Institute at that same institution.
View all posts by climatechangefork →
This entry was posted in Climate Change, Election, Sustainability and tagged accessibility, America, Anthropocene, Clinton, college, CUNY, democracy, Democrat, deplorable, Donald Trump, Economy, Education, elect, Election, eligibility, eligible, Future, Gender, globalization, Hillary, Hillary Clinton, learn, learning, political party, politician, politics, prerequisite, president, Race, Republican, resource, Science, skill, SUNY, Teaching, tertiary, Trump, university, US, vote, voter, Voting. Bookmark the permalink.