Searching for Limits – Stability for a Distant Future

Posted on January 24, 2017 by climatechangefork

I am finishing this blog on Friday, January 20th – Inauguration Day for our new president. I didn’t recognize the country that he described in his acceptance speech. Nevertheless, I wish him – and all of us – the best. One thing is clear: the speech was a continuation of a bleak but effective campaign that looks to the past for guidance – “make America great again.” I am sure that we will have plenty of opportunities to comment on the emerging presidency. Meanwhile, I would like to continue what I started last week and try to look further into our more distant future:

In this and the next two blogs I will try to get into some quantitative details regarding the balance we seek between business as usual (BAU) scenarios – in which we strive for continual growth – and the physical limits that our planet imposes. I have discussed such a balance in terms of population growth (February 4, 2014), which is one of the key indicators of the Anthropocene. Now I am extending the dialogue to the many other indicators that characterize the coming era. 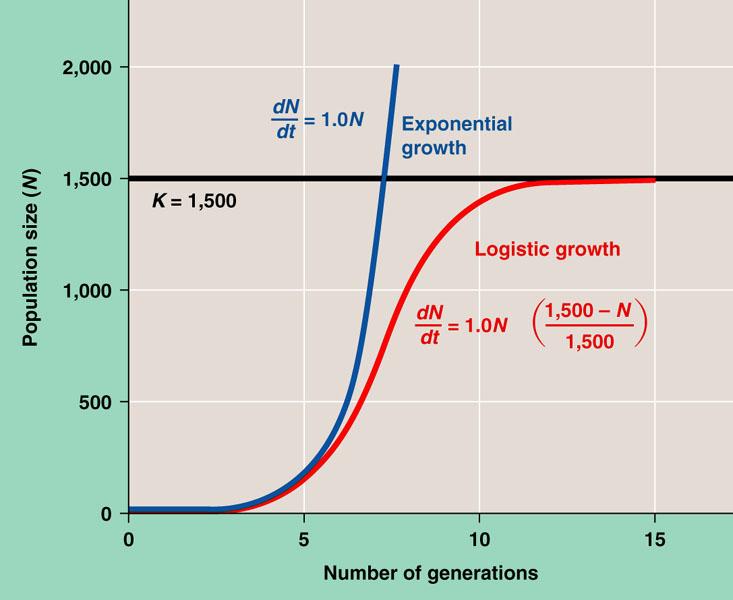 The term dN/dT in Figure 1 describes the growth of the quantity (in this case, population) via the language used in calculus; we don’t need to enter into that field here but is very useful when tackling growth issues. Growth is defined as the change in quantity as a function of time.

For exponential growth, the rate of population growth stays the same regardless of how big it gets, meaning that it shoots up incredibly quickly. The growth rate (proportionality constant) shown above is 1.0. This pattern includes population with a constant growth rate, money in a bank account with a constant interest rate, initial stages of most epidemics, tumor growth, etc. As long as the growth rate remains constant, there is no limit; population would theoretically grow forever. In BAU scenarios, given that we are unsure of certain development factors, we assume that the quantity will continue to grow at its present rate.

If, on the other hand, we assume that the growth rate will get smaller and smaller as the population increases, that means it will follow a logistic growth pattern that reaches saturation at some level. Figure 1 also includes an example of such growth, wherein the saturation takes place when the population is 1,500 and the growth rate is expressed as 1.0*(1500-N)/1,500. For N = 1,500, the quantity in parentheses becomes zero and N ceases to grow – it saturates and becomes independent of time. The saturation parameter (1,500 in the example above) is often called carrying capacity to emphasize that – at least in case of populations – saturation takes place when there is not enough food to sustain a larger population. Logistic growth does a great job at describing the population changes of bacteria in closed environments with a finite known food supply. There have, of course, been many attempts to describe global human populations in terms of logistic growth but since human societies need much more than food to thrive and grow, attempts to quantify such global carrying capacity have never made it very far.

However, it is clear that BAU scenarios are unsustainable for the time periods that I suggested in last week’s blog: 1,000-10,000 years. One of the advantages of logistic models is the strong potential role they give policy makers to define the saturation level that will replace growth with sustainable equilibrium. Once that has been done, we can start to try to design policies that will gradually shape the growth model accordingly.

Let us now try to identify saturating indicators of this identity that in principle will allow us to extract growth curves that will stabilize without destroying the environment in the long time periods that we are striving for.

The international community has agreed – as expressed at the December 2015 Paris COP21 meeting (see the serious of blogs starting on December 22, 2015) – that global carbon dioxide generation from energy use should be zero by the end of this century, at latest.

This requirement necessitates that over this time period, the fraction of global energy supplied by fossil fuels be reduced to zero or be coupled with technology to capture the emitted carbon dioxide. Additionally, the commitment mandates that all the needed energy will be generated from alternative, sustainable fuels or nuclear power. The COP21 meeting put a clear priority on reducing their reliance on fossil fuels in their energy mix through this time period.

In principle, if the requirement for zero carbon dioxide emissions is met, both the Population and Affluence terms become irrelevant. However, we have shown in earlier blogs (December 24, 2013) that if BAU scenarios for population growth continue, within a few hundred years, the population density of the planet will be similar to that of the most densely populated city today (Mumbai, India). This would include sparsely populated land areas such as global deserts, Antarctica, etc. Additionally, this does not take into account that through the changing climate on this time scale, the available land area will decline considerably due to rising sea levels and expanding desert areas.

So, for planetary survival, population growth must reach a saturation point (soon). Fortunately, increasing affluence is a major driving force for reduction of fertility rate and population growth (see December 24, 2013 blog); the United Nations, in its long-term forecasts, predicts a saturation level that corresponds to fertility replacement rate of 2.1, to stabilize world population above 10 billion toward the end of the century.

The Energy Intensity term (Energy/GDP) in principle can be reduced to zero but basic physics – the 2nd Law of Thermodynamics (June 21, 2016 where I discuss entropy) is set on minimum required energy. I already mentioned one example of such a limit when I discussed Reverse Osmosis (October 8 and 29, 2013) as the most promising technique for water desalination. In future blogs, with the help of my students, I will try to quantify this limit on the energy intensity and relate it to the current state of the technology.

The only indicator left in the IPAT identity that – at least in principle – needs to reach a saturation level is the Affluence term. This comes at a time when almost every head of state and government is demanding more and faster growth. As such, we need personal contributions to figure out how to regulate affluence levels. Next week’s blog will include some background information about the current state of global distribution of wealth.

3 Responses to Searching for Limits – Stability for a Distant Future