Saving the World Through the Pursuit of Self Interest

Posted on April 25, 2017 by climatechangefork 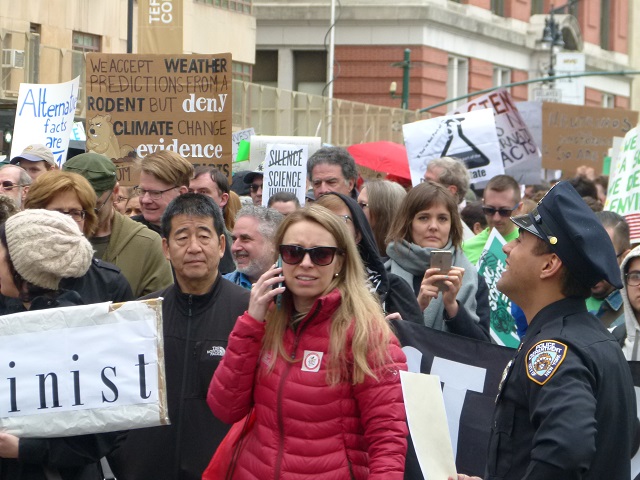 I took part in the March for Science on Earth Day in New York City, where I live. The photograph above is my introduction to the next two blogs, which will both focus on the march. This week I want to discuss our president.

President Trump claims that presidents are allowed to have conflicts of interest. The Washington Post gave some more details on the legality of the matter:

The law doesn’t say the president can’t have a conflict of interest. But Congress, under Title 18 Section 208 of the U.S. code, did exempt the president and vice president from conflict-of-interest laws on the theory that the presidency has so much power that any possible executive action might pose a potential conflict.

“As a general rule, public officials in the executive branch are subject to criminal penalties if they personally and substantially participate in matters in which they (or their immediate families, business partners or associated organizations) hold financial interests,” the Congressional Research Service said in an October report. “However, because of concerns regarding interference with the exercise of constitutional duties, Congress has not applied these restrictions to the President. Consequently, there is no current legal requirement that would compel the President to relinquish financial interests because of a conflict of interest.”

President Trump and the entire administration are putting this concept to stringent tests that will establish precedents for future administrations. The promised tax reform, rumored to be outlined this week, will have to confront the sticky situation that is the absence of the president’s publicly released tax reports. This will serve as an important testing ground for the potential conflict of self-interest in government policy.

I’ll express an honest desire for the president to act in line with his financial self-interests in one particular area: investing in flood prevention of his various real-estate holdings throughout the world, especially his Florida golf club, Mar-a-Lago.

Figure 1 shows the setting of the Florida property, which now appears to serve as the winter White House. I have repeatedly discussed how prone southern Florida is to major climate change-caused floods (see February 23, 2016 blog) and how many in the American building industry are responding to the enhanced flood risks (February 14, 2017).

I am far from the only one to be concerned about that area’s vulnerability:

According to data from the National Oceanic and Atmospheric Administration, the President’s so-called Winter White House would be partially submerged if sea levels rose by three feet in the next 83 years.

“Today we sit at ground zero of the impacts of climate change in the US,” said Democratic Senator Bill Nelson, ranking member of the Senate Commerce, Science and Transportation Committee.

His state has already suffered multiple cases of serious flooding.

“And while there are still some who continue to deny climate change is real, South Florida offers proof that it is real and it’s an issue we’re going to be grappling with for decades to come.”

A recent study published in journal Nature found that sea levels could rise by six feet by 2100 due to ice melting in the Antartic, and the President’s golf course at Doral, Florida, and several of his Sunny Isles Beach properties – along with two million homes – would be underwater.

The Nature article mentioned was published way before the 2016 presidential elections, when nobody dreamed that Donald Trump would wind up elected president of the United States. Robert M. DeConto and David Pollard wrote the paper, titled, “Contribution of Antarctica to past and future sea-level rise.” Their research project started before President Trump likely even considered running.

The authors wanted to try to reconcile past contributions to the melting of Antarctic ice and the corresponding sea level rise with present models that try to predict the future rise. They went back as far as the Pliocene period (about three million years ago) and extended their future predictions as far as the year 2500. The introductory paragraph in their paper sums up their objective:

Reconstructions of the global mean sea level (GMSL) during past warm climate intervals including the Pliocene (about three million years ago)1 and late Pleistocene interglacials2–5 imply that the Antarctic ice sheet has considerable sensitivity. Pliocene atmospheric CO2 concentrations were comparable to today’s (~400 parts per million by volume, p.p.m.v.)6, but some sea-level reconstructions are 10–30 m higher1,7. In addition to the loss of the Greenland Ice Sheet and the West Antarctic Ice Sheet (WAIS)2, these high sea levels require the partial retreat of the East Antarctic Ice Sheet (EAIS), which is further supported by sedimentary evidence from the Antarctic margin8. During the more recent Last Interglacial (LIG, 130,000 to 115,000 years ago), GMSL was 6–9.3 m higher than it is today2–4, at a time when atmospheric CO2 concentrations were below 280 p.p.m.v. (ref. 9) and global mean temperatures were only about 0–2 °C warmer10. This requires a substantial sea-level contribution from Antarctica of 3.6–7.4 m in addition to an estimated 1.5–2 m from Greenland11,12 and around 0.4 m from ocean steric effects10. For both the Pliocene and the LIG, it is difficult to obtain the inferred sea-level values from ice-sheet models used in future projections.

As is evident from the cited paragraph, the language in the paper is highly technical.

In terms of predicting future sea level rise, the reference is usually the IPCC’s 5th report. Figure 2 provides the various contributions for the IPCC-projected sea level rise of the business as usual scenario (RCP8.5). The figure shows that at least until 2100, close to half of the projected sea level rise is attributed to thermal expansion of the oceans while the melting of the Greenland and Antarctica ice sheets each contribute close to 20 cm. Figure 3, taken from the Nature paper, is based on a model that attempts to reconcile climate events using a high emission scenario model from the IPCC report. The Nature report raises Antarctica’s contributions by a factor of 5. Long term projections (until 2500) under the same scenario and model raise the projections for the Antarctic contributions to sea level rise to 15m. No more Mar-a-Lago – no more Florida, and no more NYC, to name just a few future aquatic destinations. 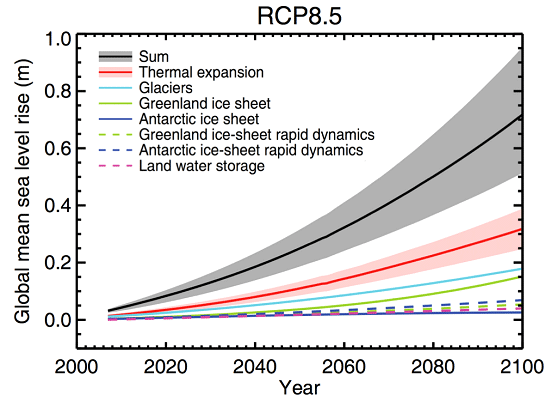 Figure 2 – Predicted contributions to sea level rise by source in the business as usual (high emission) scenario in the IPCC’s 5th Assessment Report. 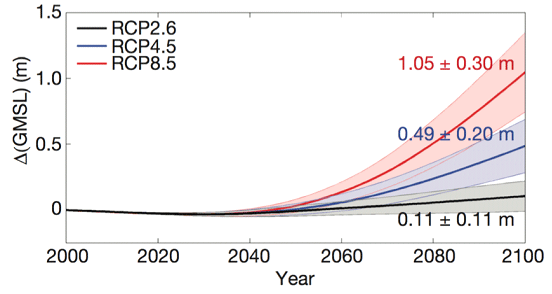 I tried to find out if President Trump has flood insurance for his properties but was unable to determine that information. Here is a recent summary of the state of federal flood insurance in the US, written by people that know more than a little bit about the subject:

When President-elect Donald Trump said, he wanted to “drain the swamp,” he may not have been referring to the sinking federal flood insurance program.

The government monopoly on flood insurance has been a major impediment to the growth of the private flood insurance market and has only exacerbated the $23 billion debt the National Flood Insurance Program owes taxpayers. It seems foreseeable that a Trump administration will act to correct such needless waste.

Swamps are typically drained to remove the water that harbors mosquito larvae and alligators. Over the years, pundits have embraced this analogy when looking to rid Washington, D.C., of self-serving politicians and feckless bureaucrats or — as in the matter at hand — a flawed federal program costing taxpayers billions.

It seems that self-interest should dictate that the president cooperate with the international community’s will, as expressed in the 2015 Paris agreement (COP21) and try to limit the global greenhouse scenario to RCP2.6. His action on this particular conflict of interest would be blessed by all of us.