Posted on August 22, 2017 by climatechangefork

My original plan was to dedicate this blog, and several following ones, to pornography. Not the kind that you have in mind – this is not that kind of a blog – but the kind that the sociologist Daniel Aldana Cohen meant when he referred to David Wallace-Wells’ piece in New York Magazine and critiqued other recent efforts to explore the consequences of climate change. I also promised (August 8, 2017) to move away from my coverage of the Trump administration and to restore my focus to climate change.

The recent events in Charlottesville, Virginia, were frightening enough to change my intentions. 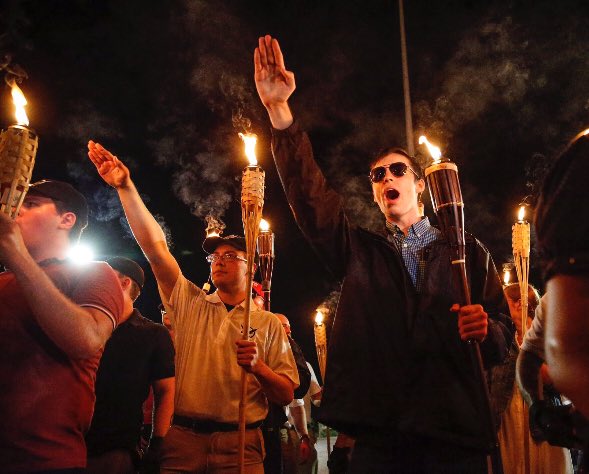 Figure 1 – Members of the alt-right mimicking the Nazi salute 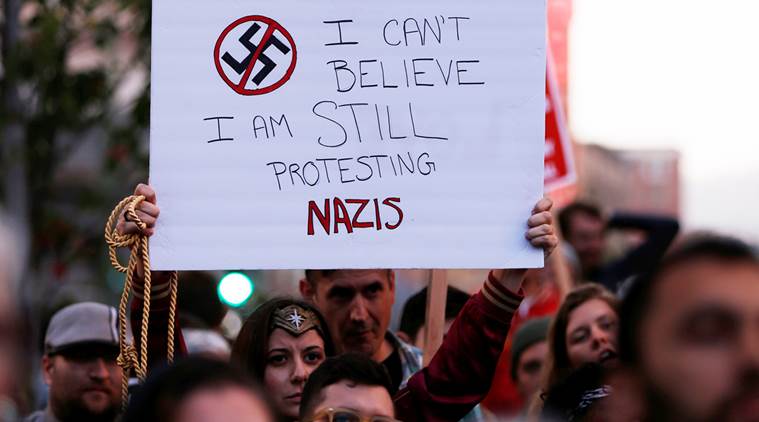 A demonstrator holds signs during a rally in response to the Charlottesville, Virginia car attack on counter-protesters after the “Unite the Right” rally organized by white nationalists, in Oakland, California, U.S., August 12, 2017. Picture taken August 12, 2017. REUTERS/Stephen Lam

Figure 1, without the caption, could have been mistaken for a picture taken in Germany in the mid-1930s while Figure 2 shows a much more modern response from a young counter-demonstrator.

My background is immediately relevant to this situation and forced me to try to address what happened. I gave a summary of my earlier life in my first blog here, more than 5 years ago (April 22, 2012):

The show of Nazi symbolism in the violent demonstrations in Charlottesville that resulted in the murder of Heather Heyer and the serious wounding of many others, together with President Trump’s sick responses, caused me (and many others) to resurrect the slogan that titles this blog – with a large question mark.

To be a Holocaust survivor I have to be old. As my short bio describes, I am 78 years old. I was born three months before the start of WWII. Now, and on many other occasions, I am fully aware that I am part of the last generation that survived the Holocaust and the atrocities that the Nazis wrought upon the world. American soldiers saved me along with the rest of the world at that time and it is hard to believe that the same hate that inflamed Germany before WWII is now starting to do the same to American society.

I have convinced myself that – given I am the last Holocaust survivor at the school where I work – it is my duty to be part of the effort to stop the penetration of hate into the highest echelons of our country. I am too old to take part in the demonstrations to counter hate so the only activities that I can pursue are teaching, writing, speaking, and voting.

HBO’s short documentary filmed during the demonstrations, “Charlottesville: Race and Terror,” convinced me to join many others in contradicting President Trump’s attempts to find symmetry between the alt-right participants and the counter-demonstrators standing against hate. The alt-right participants were well organized, their slogans well coordinated, and in many cases even their “uniforms” matched. Their age distribution seems to be very narrow, tilted toward the younger generations, and their ranks were mostly populated by males. Some of their slogans such as “Blood and soil,” were directly plagiarized from Nazis in the 1930s, some, such as “Jews will not replace us,” were a bit more specific to the period. Others were modifications in response to the recent Black Lives Matter movement: demonstrators chanted, “White lives matter.” The resemblance to 1930s Germany was not to the Holocaust itself, but rather the SA (Sturmabteilung – Storm Detachment): the original paramilitary units of the Nazi party that ultimately perpetrated the atrocities of WWII.

There is also an abundance of parallel conspiracy theories between the two eras. Alex Jones, a prominent voice of the alt-right, is propagating the perception that Jewish actors mascaraded as members of the KKK. The HBO video includes a segment with David Duke, ex-grand wizard of the KKK, among the demonstrators. I guess that he must be part of the conspiracy.

The demonstrations did not only parallel 1930s Nazi Germany; they also reflected early 20th Century Ku Klux Klan history and their murderous actions in the US. The KKK in the South targeted Blacks while the Nazis primarily targeted Jews but neither movement spared other non-White or non-Aryan minorities.

The most frightening aspect of these events to a guy with my background is the apparent nod that the alt-right demonstrators are getting from the president of the United States. This makes the correlation with Nazi Germany almost complete. President Trump made the killing of Heather Heyer the only real crime in the event. Aside from this crime, he equated a false symmetry between the alt-right demonstrators and the anti-white-supremacy demonstrators. Fortunately for us now, as opposed to at the rise of the Nazis, and the height of the KKK, we have a powerful anti-Nazi and anti-KKK movement that is eager and ready to confront such demonstrations while the Germans and older American generations didn’t.

Some of the key players in the Trump administration are Jewish. It was reported that they were shaken and upset by the events but they didn’t resign. However, many voices on the right and left, in the business community and in the army raised their voices in protest. One such instance, directly related to my own background and my liberation by American soldiers will serve as an encouraging example and strengthen our hope that in spite of President Trump, America will not deteriorate into a Holocaust-equivalent reality.

Among the estimated thousands of alt-right demonstrators, many of whom carried firearms, social media zoomed in on one guy who was wearing a baseball hat with the insignia of the 82nd Airborne Division on it. The Washington Post covered the backlash: “He put on an 82nd Airborne cap and gave a KKK salute in Charlottesville. Vets had words”:

And the man in the hat — who hasn’t been publicly identified — drew rebuke after rebuke from the official twitter handle of the unit’s association. “Respectfully, anyone who thinks this man represents our culture and values has never worn the maroon beret … and never will,” one tweet for the 82nd’s Twitter account said.

Seventy years ago, members of the 82nd Airborne had fought against the Nazis. On a hot Saturday in 2017, someone wearing their hat was fraternizing with neo-Nazis.

The 82nd Airborne saw heavy fighting during World War II, according to the U.S. Holocaust Memorial Museum. Paratroopers advanced into Germany and liberated the Wöbbelin camp, a subcamp of the Neuengamme concentration camp. At its height, Neuengamme held 5,000 prisoners, many of whom were diseased and starving. The unit saw nearly 7,000 battle casualties, according to the museum.

The man looks much too young to have been alive in WWII or at the height of the KKK atrocities. From the quoted feedbacks in the paper we have no idea how he got the hat.

I have a hat like this with the insignia of the 30th Division on it. I have it because I was granted an honorary membership in the Division for being a concentration camp survivor saved by its soldiers. The background of that Division is similar to the 82nd as described above. After discovering the identity of the soldiers that saved me, I have participated for the last 10 years in annual meetings of survivors and liberators around the country. Unsurprisingly, all of the liberators were soldiers in their late 80s and 90s. We became drinking buddies and shared stories. They viewed us, the survivors, as one of the main causes for which many of their friends gave their lives fighting the Nazis. They had nothing to do with the KKK-saluting guy that was photographed in Charlottesville.