Posted on August 15, 2017 by climatechangefork

The Trump administration’s approach to climate-related, policy becomes clear from the following:

The administration gave “official” indication to the UN that it will abandon the Paris 2015 international agreement:

WASHINGTON — The White House formally notified the United Nations on Friday that it intends to abandon the Paris agreement on climate change but remains open to “re-engaging” on the accord.

The United States will participate in United Nations climate negotiations later this year despite its planned withdrawal, according to the administration’s statement of intent.

The letter has no legal weight and does not set in motion the United States’ departure from the pact of nearly 200 nations to curb planet-warming greenhouse gas emissions. Rather, it is a political document that affirms President Trump’s declaration in June that the Paris agreement is a bad deal for America.

The US Justice Department has amplified its effort by to catch and prosecute leakers:

Attorney General Jeff Sessions said Friday that the Justice Department has more than tripled the number of leak investigations compared with the number that were ongoing at the end of the last administration, offering the first public confirmation of the breadth of the department’s efforts to crack down on unauthorized disclosures of sensitive information.

The announcement seemed designed both to reassure the president, who has criticized the attorney general as being “weak” on leak investigations, and to scare government officials away from talking to reporters about sensitive matters.

Sessions said he was devoting more resources to stamping out unauthorized disclosures, directing Deputy Attorney General Rod J. Rosenstein and FBI Director Christopher A. Wray to actively monitor every investigation, instructing the department’s national security division and U.S. attorneys to prioritize such cases, and creating a new counterintelligence unit in the FBI to manage the work.

The administration is attempting to eliminate “Climate Change” from the vocabulary of the US government:

A series of emails obtained by the Guardian between staff at the Natural Resources Conservation Service (NRCS), a USDA unit that oversees farmers’ land conservation, show that the incoming Trump administration has had a stark impact on the language used by some federal employees around climate change.

A report by The New York Times that seemed to have stemmed from information leaked by government scientists appeared to demonstrate the impact of all these policy changes:

WASHINGTON — The average temperature in the United States has risen rapidly and drastically since 1980, and recent decades have been the warmest of the past 1,500 years, according to a sweeping federal climate change report awaiting approval by the Trump administration.

The draft report by scientists from 13 federal agencies, which has not yet been made public, concludes that Americans are feeling the effects of climate change right now. It directly contradicts claims by President Trump and members of his cabinet who say that the human contribution to climate change is uncertain, and that the ability to predict the effects is limited.

“Evidence for a changing climate abounds, from the top of the atmosphere to the depths of the oceans,” a draft of the report states. A copy of it was obtained by The New York Times.

The authors note that thousands of studies, conducted by tens of thousands of scientists, have documented climate changes on land and in the air. “Many lines of evidence demonstrate that human activities, especially emissions of greenhouse (heat-trapping) gases, are primarily responsible for recent observed climate change,” they wrote.

The report was completed this year and is a special science section of the National Climate Assessment, which is congressionally mandated every four years. The National Academy of Sciences has signed off on the draft report, and the authors are awaiting permission from the Trump administration to release it.

Except that in reality, there was no such suspense surrounding the publication of the report; it had already been released. The New York Times had just spectacularly failed to do its homework. I quickly found this out when I searched for more information on the report that hadn’t been aware of.

In fact, the report has been available and open to public comment as of the end of last year and can be downloaded in its final draft here.

Almost everybody else caught on immediately and The New York Times apologized. The Washington Post commented on the mistake:

The New York Times on Wednesday appended a correction to a story about a climate change study:

Correction: August 9, 2017
An article on Tuesday about a sweeping federal climate change report referred incorrectly to the availability of the report. While it was not widely publicized, the report was uploaded by the nonprofit Internet Archive in January; it was not first made public by The New York Times.

That correction, which sits at the foot of the story, dutifully straightens out the record. Yet given the magnitude of the screw-up, it should sit atop the story, surrounded by red flashing lights and perhaps an audio track to instruct readers: Warning: This story once peddled a faulty and damaging premise.

The report is long (close to 700 pages) but I’m including the Table of Contents and some of the background of its publication for your reference.

The report is certainly up to date regarding the extent of climate change, future forecasts, and evidence of the key role that humans are playing in the process. It seems counterintuitive that this is an official document of the US Government issued under the same administration that claimed climate change was a Chinese Hoax and that just removed our country from the only international agreement to try to mitigate the human impact on the problem. As I said, the report was opened to the public before the new administration took office. This week the White House Office of Science and Technology must decide whether to approve the final version. The White House has plenty of time to insert its own perspective. 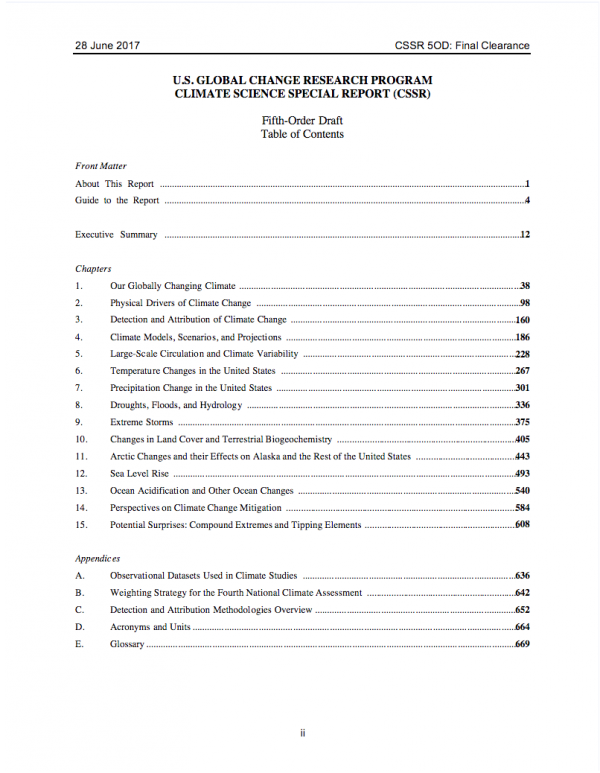 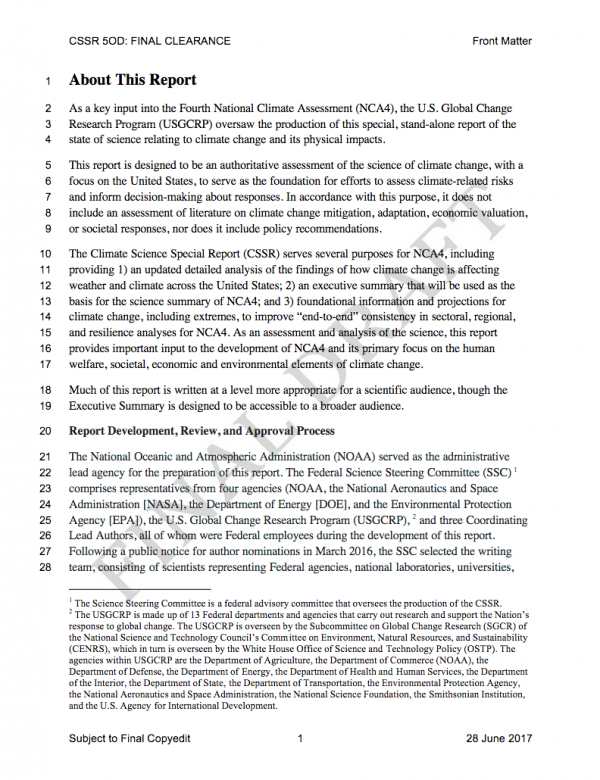 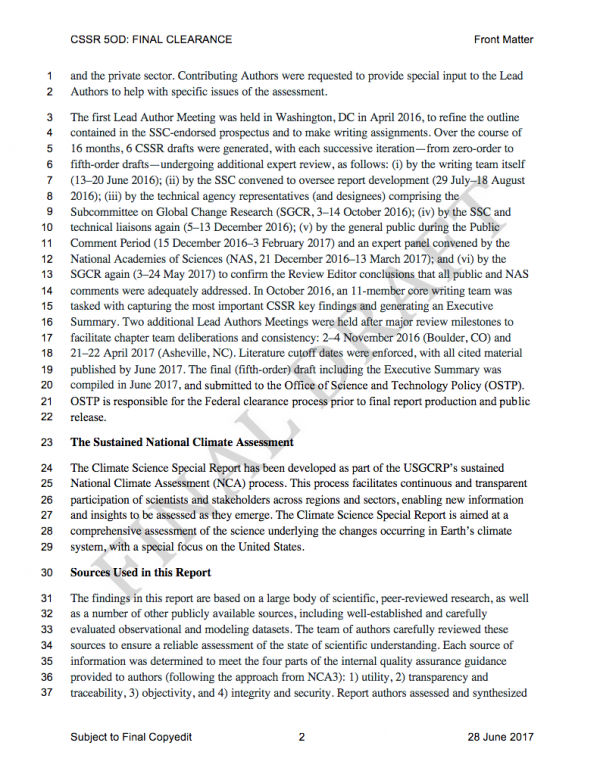 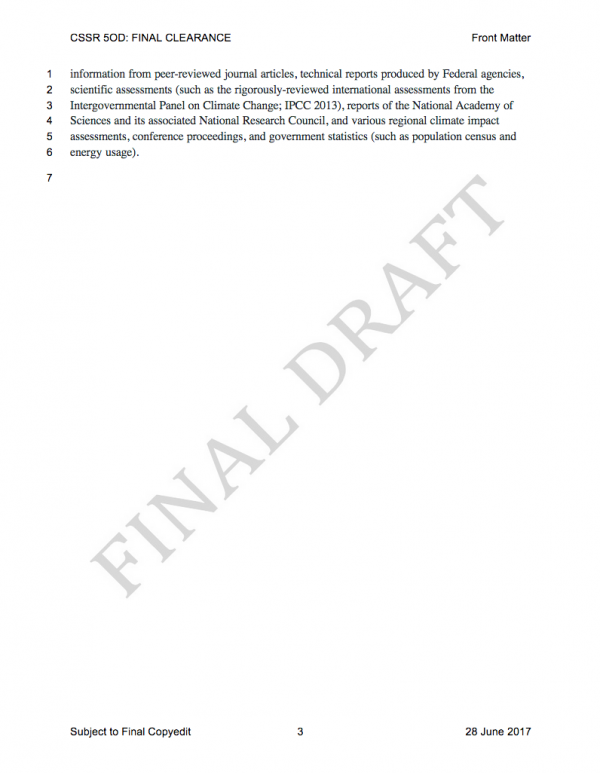 Micha Tomkiewicz, Ph.D., is a professor of physics in the Department of Physics, Brooklyn College, the City University of New York. He is also a professor of physics and chemistry in the School for Graduate Studies of the City University of New York. In addition, he is the founding-director of the Environmental Studies Program at Brooklyn College as well as director of the Electrochemistry Institute at that same institution.
View all posts by climatechangefork →
This entry was posted in Anthropogenic, Climate Change, IPCC, UN and tagged Adaptation, administration, China, Climate Change, Climate Change Denial, Climate Change Deniers, climate science, Climate Skeptics, Donald Trump, Environment, fake news, Fossil Fuels, Global Warming, Government, jeff sessions, leak, News, nrcs, Paris 2015, Paris accord, Paris Agreement, Report, Science, scientist, Trump, UN, US, vocab, vocabulary, Weather, weather extremes. Bookmark the permalink.