Location Sensitivities of Other Biota

Posted on July 24, 2018 by climatechangefork

My last blog ended with a promise that I would look into location sensitivity of other foods and drinks – after all, humans can’t survive on wine alone.

When I Googled “climate change impact,” these were my top results:

With the exception of real estate, all of these directly relate to living systems. I have covered the impacts on the flora and fauna of a few habitats in previous blogs, including the repercussions on fisheries. In that blog I emphasized the conflict between fishermen and regulators in Maine regarding how best to address the crisis of fishing in the state. Populations of fish in specific places are thinning out, many migrating to better places – e.g. north to cooler water (January 20 and 27, 2015). Fishermen all over the world use a localized concept similar to the French terroir system I explained last week. In years past, the fishermen of Maine found plenty of fish in their coastal waters and assumed that this would stay true in the future. That is no longer the case.

Nor is the issue specific to Maine. Figure 1 gives a quantitative assessment of the movement of individual fish species in the US, as compiled by NOAA: 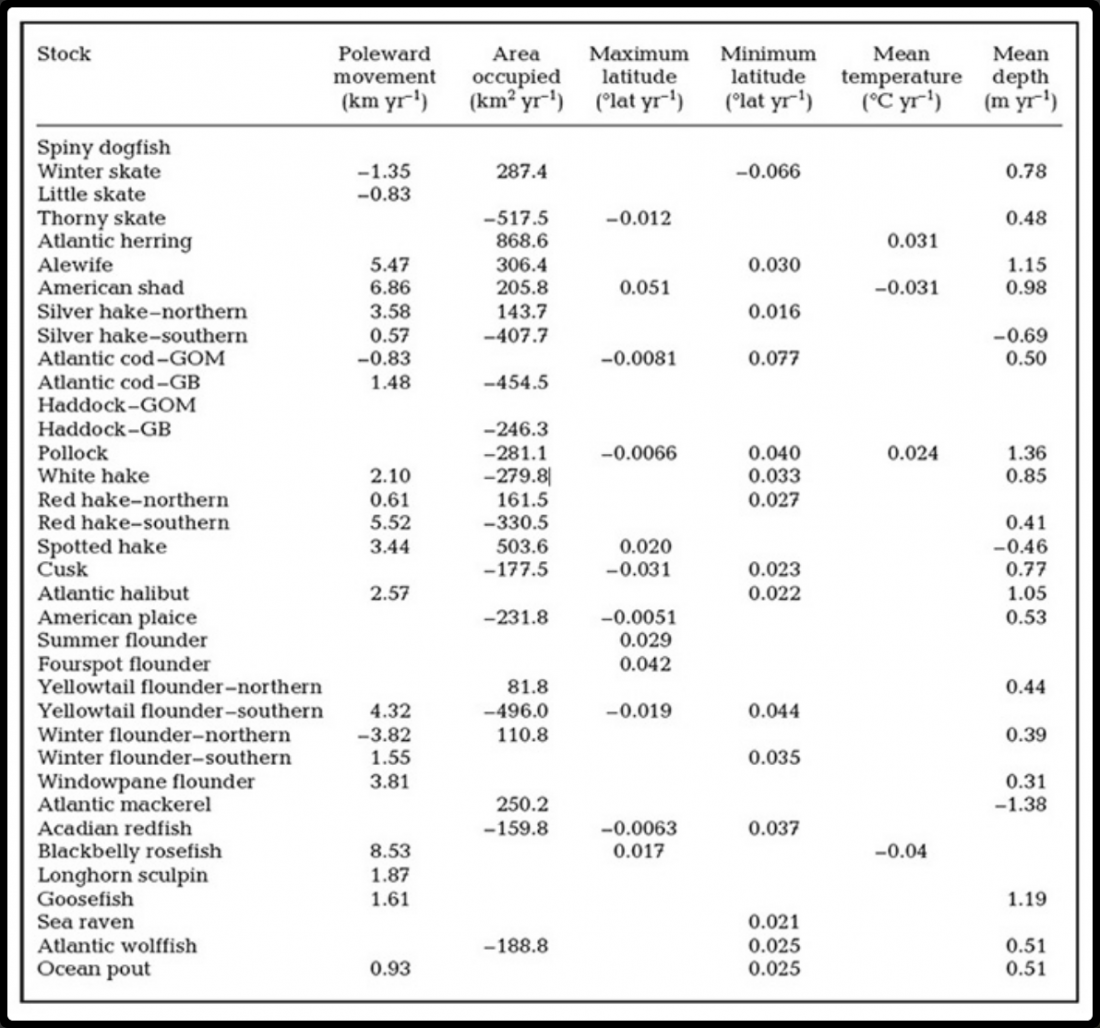 Fish can move quickly so the changes are relatively fast. The population of blackbelly rosefish shifted ~8.53km (more than 5 miles) in one year, which is a significant change. But the migration to cooler water is obviously not a guaranty for successful adaptation. The fish then have to find edible food in their new location or adapt to consume different food. Such adaptation usually takes time and works along the Darwinian principle, i.e. self-selection for species that can best survive the conditions.

Crops (including the vines that produce the right grapes for good wine production) don’t pick up and move but plants have other mechanisms for spreading to new locations – namely, pollinators. The Guardian published an op-ed about the impact of climate change on various garden plants:

From my perspective as caretaker of this little plant community, the problem is also that many of the seasonal understandings that have been basic to gardening in Toronto can no longer be assumed. Lavender might not survive the winter without wrapping. Tomatoes might need to be shaded in order to survive what is forecast to be an especially hot summer. Plants that require specialist pollinators may find their calls unanswered because the short-lived insects on which they rely may now have lives out of sync with the blooms.

Obviously the same issues hold true for growing all the agricultural products (indirectly including the meat that we consume) that make up our sources of food, a process that also constitutes most of the employment in developing countries. The impacts on these vital crops aren’t limited to temperature changes; the main concern is how the changing temperature affects a farm area’s water cycle.

For those of us that sometimes forget, we are all part of the biota. We are feeling the impacts not only via our food and drink supply but also through our ability to survive the changing climate. Since the impacts are even worse within poor nations, many of people are using the same method of adaptation as the fish – trying to migrate to better places. Just type, “environmental refugee” into the search box to find out how often I address this issue.

In an earlier blog I discussed claims that we are in the middle of the Sixth Mass Extinction, according to the quantified decline in population of many species (September 19, 2017). The measurement of declining species is also territorial. We measure where we think that these species are (or have been) most abundant – migration in most cases is difficult to follow.

When I started writing about the impact of climate change on wine I ran across a relevant article in The New York Times:

5 Plants and Animals Utterly Confused by Climate Change: Global warming is causing spring to arrive early and autumn to come late in many places, and not all species are adapting at the same rate.

By Livia Albeck-Ripka and Brad Plumer

The article references a scientific paper from 2010.

Scientists who study the changes in plants and animals triggered by seasons have a term for this: phenological mismatch. And they’re still trying to understand exactly how such mismatches — like the blooming of a flower before its pollinator emerges — might affect ecosystems.

I was unfamiliar with the term, “phenological mismatch,” so I referred to the original paper. Here is the abstract, along with a key figure that explains the impact of climate change on reproduction:

The effects of phenological mismatches on demography

Climate change is altering the phenology of species across the world, but what are the consequences of these phenological changes for the demography and population dynamics of species? Time-sensitive relationships, such as migration, breeding and predation, may be disrupted or altered, which may in turn alter the rates of reproduction and survival, leading some populations to decline and others to increase in abundance. However, finding evidence for disrupted relationships, or lack thereof, and their demographic effects, is difficult because the necessary detailed observational data are rare. Moreover, we do not know how sensitive species will generally be to phenological mismatches when they occur. Existing long-term studies provide preliminary data for analysing the phenology and demography of species in several locations. In many instances, though, observational protocols may need to be optimized to characterize timing-based multi-trophic interactions. As a basis for future research, we outline some of the key questions and approaches to improving our understanding of the relationships among phenology, demography and climate in a multi-trophic context. There are many challenges associated with this line of research, not the least of which is the need for detailed, long-term data on many organisms in a single system. However, we identify key questions that can be addressed with data that already exist and propose approaches that could guide future research. 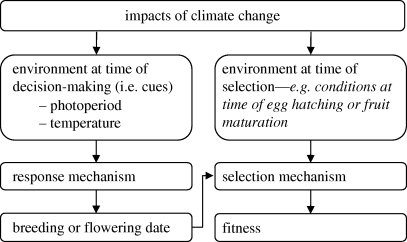 Given that the paper itself didn’t give much of a description of “phenology” either, here is Wikipedia’s definition of the term:

Phenology is the study of periodic plant and animal life cycle events and how these are influenced by seasonal and inter-annual variations in climate, as well as habitat factors (such as elevation)

In other words, a phenological mismatch is when related parts of an ecosystem are no longer in sync. We still don’t know the scope or scale of this climate change-based phenomenon but we’d better get familiar with the terminology and its significance to humans.

7 Responses to Location Sensitivities of Other Biota