Posted on July 31, 2018 by climatechangefork 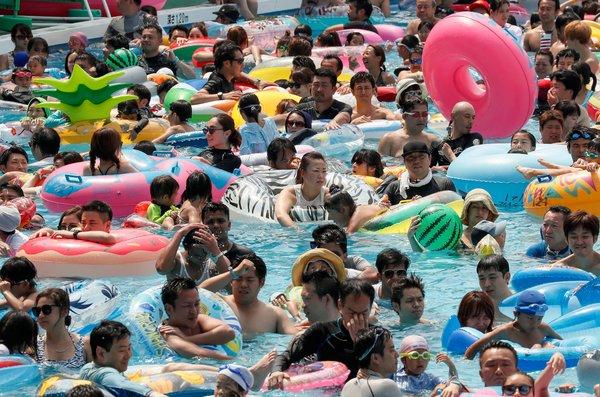 Earlier this month (July 3rd and 10th) I wrote two blogs about a heat wave that was affecting my home of NYC and how it impacted me. The weather here now is lovely (around 85oF, with bearable humidity and no flooding), but thanks to the torrents of available information, I am fully aware that the situations in many other places throughout the world are dire. Yet some of our government representatives are placing their focus on meteorologists. Below is a piece from The New York Times about these concerns:

When Did Talking About the Weather Become Political?

Take the battle in Congress over the renewal of a grant to help television meteorologists incorporate climate change into their weather reporting. Four Republican senators have called for an investigation, calling it indoctrination. Democrats last week moved to protect the funding, which is administered through the National Science Foundation.

“Research designed to sway individuals of a various group, be they meteorologists or engineers, to a politically contentious viewpoint is not science — it’s propagandizing,” the senators wrote to the foundation’s inspector general.

The four Republicans — James Inhofe and James Lankford of Oklahoma, Ted Cruz of Texas and Rand Paul of Kentucky — requested an investigation into whether the grants, which have been in place for almost ten years, violated federal law.

The first part of my morning routine is to read about recent events in the Economist Espresso. It curates and summarizes 5 news items each day under “The World in Brief.” Here’s one that showed up on Thursday:

Too hot to handle: the global heatwave

From the Arctic Circle to Japan, via Europe and America, the northern hemisphere is sizzling. In parts of Finnish Lapland temperatures recently hit 32.1ºC (89.8ºF), some 12ºC warmer than is typical for July. In Japan, where a record 41.1ºC has been reached, at least 65 people have died and a natural disaster has been declared. Wildfires have raged in Sweden and Greece. There looks to be no let-up to the swelter over the coming days—weeks perhaps. That will please sun-seekers. But heatwaves mostly bring problems, especially in the developing world: crops are ravaged, food spoils and workers become less productive. Studies even suggest that violent crime rises. Such extreme weather was a once-a-millennium outlier. But man-made climate change makes it more likely. Humans are getting better at living with heatwaves, from installing air-conditioning to painting shanty-town roofs white. Better to deal with the cause of the problem.

Nothing in that list is new to me – all the events mentioned took place over the span of at least several days and they are all in various stages of development that have been covered throughout – but the piece summarizes them nicely.

After breakfast I scanned my morning paper (NYT). The front section had four major articles on extreme climate events, including some of those mentioned in The Economist. Each of these took up a full print page:

“In Japan, Deadly Heat Wave Tests Endurance of Even the Most Stoic”

“In Greece, Wildfires Kill Dozens, Driving Some Into the Sea”

The Economist piece and all of the NYT articles above had opening photographs. I chose to copy the one depicting the heat wave in Japan because it addresses people’s attempts to cope with the extreme weather. The picture also demonstrates the issue that facilities for such coping methods are becoming a bit crowded.

It is interesting to try to figure out how Messrs James Inhofe, James Lankford, Ted Cruz, and Rand Paul want TV meteorologists to explain the globalization and increased intensity and frequency of extreme weather events without invoking climate change. I’d also like to know their definitions of science and indoctrination and their expertise in differentiating between the two.

Following this line of thought, here’s an excerpt from an article in Slate:

“Can We Blame the Summer Heat Wave on Global Warming?” The relationship between weather and climate is complicated.

The questions are as important as they are difficult. The long-term effects of climate change–such as the rising sea levels that will eventually displace tens of millions of people–are only a part of the story. Climate change also affects humans through an increased frequency of extreme weather: hurricanes, floods, droughts, and heat waves, some of it occurring right now. At least, it’s likely. A growing field of science is starting to emerge to help us understand the precise relationship between the slowly changing global climate and the variable weather we experience daily: extreme event attribution.

Or as Michael Wehner puts it: “probabilistic” extreme event attribution. Wehner, a senior staff scientist at the Lawrence Berkeley National Laboratory, seemed careful not to frame his field as a magic bullet for assigning undisputable blame to individual weather events. “It’s not: Climate change flooded my house,” explained Wehner. “It’s: Climate change changed the chances of flooding my house.”

To understand what extreme event attribution does, it’s helpful to think about it through a simplified analogy. There’s a bucket full of balls: Some are blue, and some are red. If we draw a blue ball, the weather will be moderate. If we draw a red ball, the weather will be extreme. Before global warming, the bucket contained almost entirely blue balls with a handful of red ones mixed in. Global warming is slowly swapping a few blue balls for red ones. If today there’s a hurricane, we know that a red ball was drawn. But we don’t know if it was one of the original red balls or one of the new ones contributed by climate change. What extreme event attribution does allow us to do is estimate how many red balls were added to the bucket.

Is that analogy good enough to account for all these climate disasters?

Updates from the weekend:

‘Furnace Friday:’ Ill-Equipped for Heat, Britain Has a Meltdown

Air-conditioning is a luxury here. Not only do most homes not have it, but they are built to keep the heat in, experts say. As a result, the demand for fans has skyrocketed, leaving most stores in London out of stock.

“Droughts, Heat Waves and Floods: How to Tell When Climate Change Is to Blame”

Be safe and stay tuned!!!

1 Response to Science or Indoctrination?