Posted on August 7, 2018 by climatechangefork

Last week I looked at four Republican senators’ efforts to terminate government funding for television meteorologists who mention climate change as part of the forecast. I also discussed the issue in light of the global heat wave and the havoc it is wreaking all around the world – namely, how exactly are meteorologists supposed to discuss the destructive and increasingly frequent manifestations of all these deadly extreme events without referencing climate change?

The NYT announced that the Trump administration has finally nominated a Science Adviser: “Kelvin Droegemeier, a well-regarded meteorologist, has a long research record. But his views on climate change are not well known.” Even so, he has made his reputation by investigating extreme weather events and studying computer simulations of weather systems. These are the same tools that most scientists are now using to figure out human attributions to extreme weather events.

The last article I linked to in my last post talked about work taking place in some of the best British universities, where they are using exactly these tools with the goal that, “Weather forecasters will soon provide instant assessments of global warming’s influence on extreme events.” These are the people that the abovementioned four distinguished senators want to deny access to any research on such topics.

It is obvious (at least to me) that the senators’ focus on TV meteorologists is arbitrary; they would prefer to terminate all government efforts to understand and find ways to mitigate and adapt to climate change. Considering this is (unfortunately) a likely possibility, it might help to get an idea about how the US Federal government is currently involved in activities related to climate change. Figures 1 and 2, taken from the Government Accountability Office site (GAO), summarize the efforts both in terms of involvement of agencies and $ values.

Federal funding for climate change research, technology, international assistance, and adaptation has increased from $2.4 billion in 1993 to $11.6 billion in 2014, with an additional $26.1 billion for climate change programs and activities provided by the American Recovery and Reinvestment Act in 2009. As shown in figure 1, the Office of Management and Budget (OMB) has reported federal climate change funding in three main categories since 1993: 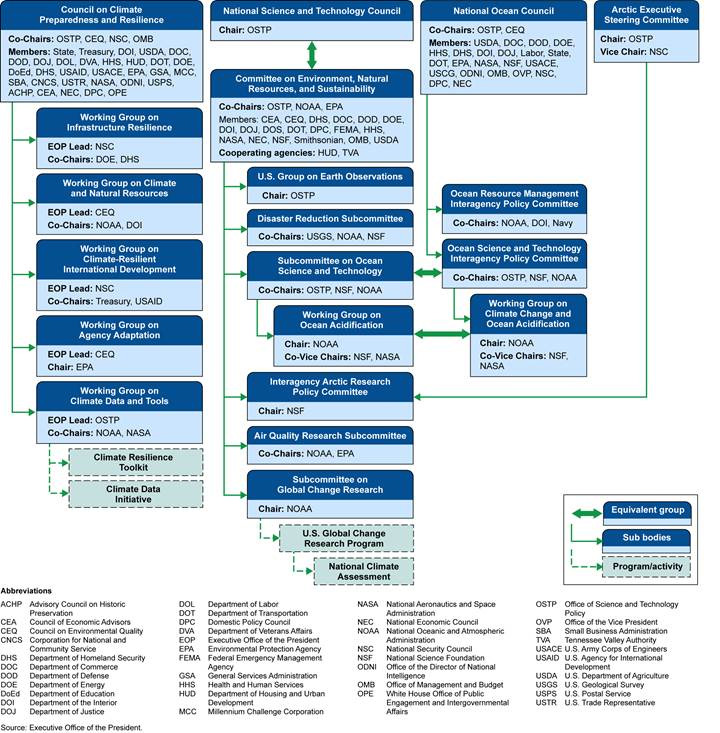 As illustrated in figure 2, many federal entities manage programs and activities related to climate change. Each of these federal departments and agencies is operating under its own set of authorities and responsibilities and addresses climate change in ways relevant to its mission. In the context of providing climate-related information, the National Research Council observed that no single government agency or centralized unit could perform all the required functions, and that coordination of agency roles and regional activities is a necessity.

As a result of climate-related risks, fiscal exposure for the federal government has increased in many areas, including federal property and infrastructure, supply chains, disaster aid, and federal insurance programs. Consequently, Limiting the Federal Government’s Fiscal Exposure by Better Managing Climate Change Risks has been on GAO’s High Risk List since 2013.

Over the past several years, federal agencies have made progress toward better organizing across and within agencies and among the various levels of government. The U.S. Global Change Research Program, for example, is a confederation of the research arms of 13 federal departments and agencies that carry out research and develop the nation’s response to climate change. In 2014, it published the National Climate Assessment report, which reviews observed and projected changes in climate in the United States, the effects of these changes, and options for responding.

These extended efforts don’t even account for the government involvement in education. In a few weeks, my school’s academic year will start (along with most other schools in this country), at which point I will have close to 100 students (registration is still ongoing) in my course on climate change. This summer I dedicated most of my time to original research on some of the issues I’ve been mentioning. Next week I will try to describe my efforts to distinguish between indoctrination and teaching science.