Giving Up is Not an Option: Let’s Focus on What We Still Can Do

Posted on August 14, 2018 by climatechangefork 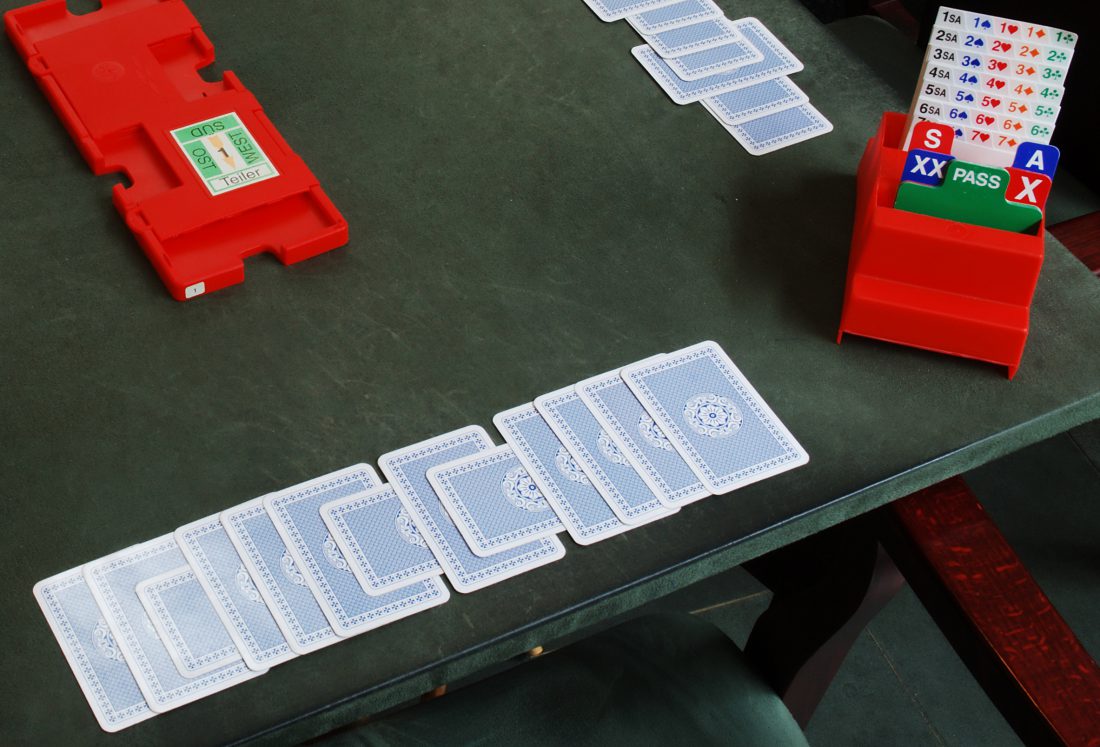 Bridge used to be one of my favorite social activities (when my free time was a bit more abundant). To those not familiar with the rules, the basic structure is simple: one deck of cards, two teams of two. Wikipedia gives a pretty good explanation:

The game consists of several deals,[b] each progressing through four phases. The cards are dealt to the players, and then the players auction or bid to take the contract, specifying how many tricks the partnership receiving the contract (the declaring side) needs to take to receive points for the deal. During the auction, partners communicate information about their hand, including its overall strength and the length of its suits, although conventions for use during play also exist. The cards are then played, the declaring side trying to fulfill the contract, and the defenders trying to stop the declaring side from achieving its goal. The deal is scored based on the number of tricks taken, the contract, and various other factors which depend to some extent on the variation of the game being played.[4]

The player who wins the auction knows the exact cards that he and his partner were holding (his partners card are laid on the table for everybody to see) but the only information that he has about the holdings of his opponents’ cards is what he could deduce during the bidding. Naturally it is not a complete knowledge. A “golden” rule of bridge (as conveyed to me) is to play based only on information that can help you immediately and ignore everything else, even if it might impact your ultimate success.

I came to realize that such a strategy is essential for survival in this age of climate change and there is no better time to start implementing it than now.

The academic year starts in less than three weeks. I will teach close to 100 students (in two sessions) in my course on climate change (see the July 18, 2017 blog). My teaching philosophy is as follows:

This clearly should satisfy the concerns of Messrs. James Inhofe, James Lankford, Ted Cruz, and Rand Paul (July 31, 2018 blog) who want to make sure that federal funding directed at science will not go to indoctrinating poor students in the hearsay of climate change.

However, I cannot expect to retain credibility with my students without referring to what has been taking place this summer. The reality is indeed bleak on a number of fronts and my students need to be familiar with it. Hopefully that knowledge will incentivize them to learn the science and be receptive to how they can contribute to a better world – i.e. help us survive.

Courses will start with a set of reading assignments documenting some of this summer’s climate events. We will begin with The New York Times Magazine article, “Losing Earth: The decade we almost stopped climate change” by Nathan Rich with photographs by George Steinmetz.

CUNY students get free subscriptions to The New York Times, so this should not constitute a hardship. The magazine piece sheds light on the debate in the US that took place between 1979 and 1989 on what to do about the sharp rise in carbon dioxide concentrations recorded in the atmosphere that resulted from the increased global use of fossil fuels. The piece has a strong message (should we say it’s trying to indoctrinate?) and was written to impart a sense of missed opportunity. Obviously, Al Gore is a major player in this history. At that time he was a young congressman who was given a small subcommittee to manage:

Gore was granted his first leadership position, albeit a modest one: chairman of an oversight subcommittee within the Committee on Science and Technology — a subcommittee that he had lobbied to create. Most in Congress considered the science committee a legislative backwater, if they considered it at all; this made Gore’s subcommittee, which had no legislative authority, an afterthought to an afterthought. That, Gore vowed, would change. Environmental and health stories had all the elements of narrative drama: villains, victims and heroes. In a hearing, you could summon all three, with the chairman serving as narrator, chorus and moral authority. He told his staff director that he wanted to hold a hearing every week.

Mr. Rich decided to adapt Mr. Gore’s strategy in his writing. In his own “narrative drama,” the heroes are Rafe Pomerance (environmental activist) and Jim Hansen (a physicist with NASA), the villain is John Sunumu (Chief of Staff of President H. W. Bush), and the rest of us are the victims. The result is a readable piece that invariably asks the question of what went wrong and how things could have come out better. It also puts the political debate on the same footing as the scientific one.

The piece is accompanied by a somewhat frightening collection of images – two full pages worth of aerial photographs of major devastation caused recently by extreme climate events, including:

This is a decent background for us to start discussing the science.

The history in the NYT Magazine piece is more than 35 years old, meaning that these events took place before any of my students were born. That means it is vital to also compile what happened globally this summer because that makes it more personal. Horror stories are still coming out on a daily basis. The Economist counted up some of them:

EARTH is smouldering. From Seattle to Siberia this summer, flames have consumed swathes of the northern hemisphere. One of 18 wildfires sweeping through California, among the worst in the state’s history, is generating such heat that it created its own weather. Fires that raged through a coastal area near Athens last week killed 91 (see article). Elsewhere people are suffocating in the heat. Roughly 125 have died in Japan as the result of a heatwave that pushed temperatures in Tokyo above 40°C for the first time.

Yet as the impact of climate change becomes more evident, so too does the scale of the challenge ahead. Three years after countries vowed in Paris to keep warming “well below” 2°C relative to pre-industrial levels, greenhouse-gas emissions are up again. So are investments in oil and gas. In 2017, for the first time in four years, demand for coal rose. Subsidies for renewables, such as wind and solar power, are dwindling in many places and investment has stalled; climate-friendly nuclear power is expensive and unpopular. It is tempting to think these are temporary setbacks and that mankind, with its instinct for self-preservation, will muddle through to a victory over global warming. In fact, it is losing the war.

Two weeks ago, I did a similar compilation of recent disasters but I haven’t been able to keep up with the ongoing spate here while also discussing other topics. It’s not too difficult though, for students to follow up and ask their own questions as to attribution.

Next week I will focus on an article published in PNAS (Proceedings of the National Academy of Sciences) that describes an Armageddon. Almost immediately, newspapers from all over the world duplicated it almost verbatim, with one main goal: to scare us all. I will discuss the paper and my view that the more we scare people, the more likely it is that they will view the issue as hopeless and give up on trying to mitigate or even adapt to the situations.