Posted on August 28, 2018 by climatechangefork 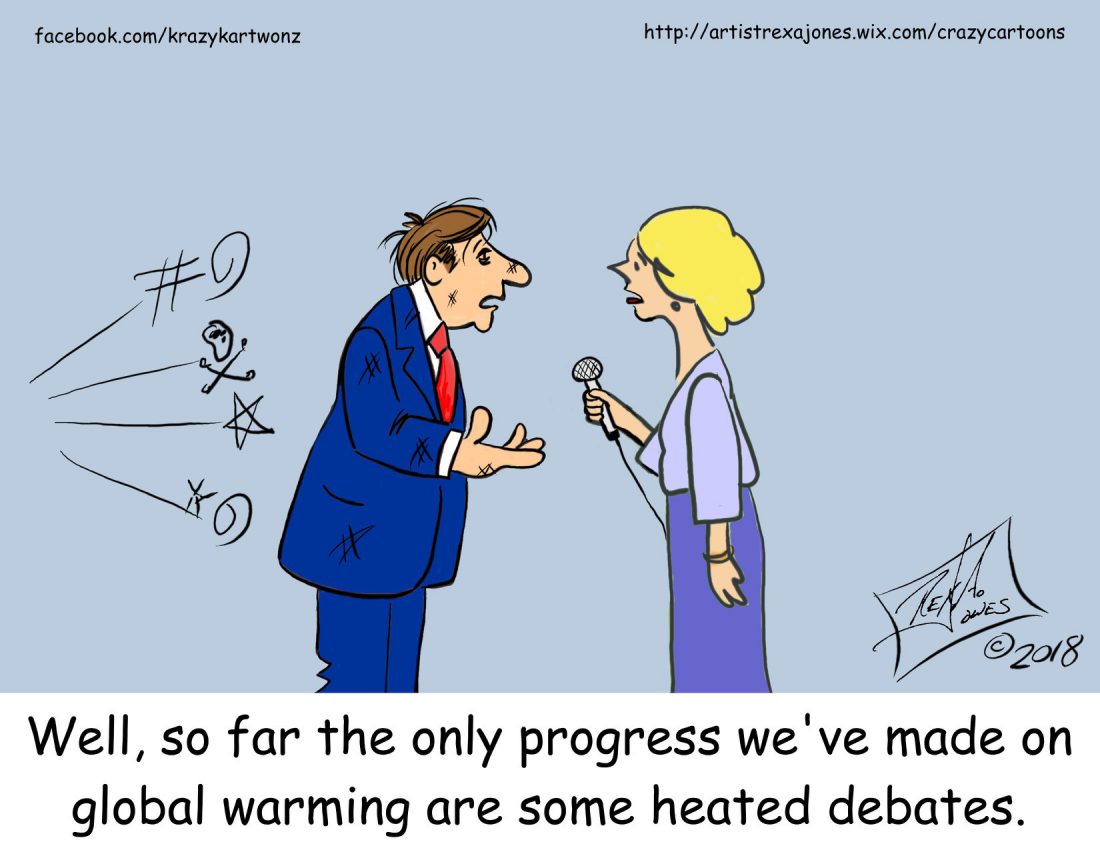 Cartoon by Rex A. Jones

A few days ago I got a message on Facebook from my friend who edits this blog. She sent me the cartoon above by Rex A. Jones with the caveat that it seemed reductionist and inaccurate. I was a bit surprised to receive the message on two grounds: I rarely use social media because I am not comfortable with limiting my opinions to one or two sentences. Also, my friends are familiar with many aspects of climate change and don’t usually label the discussion “hot air.”

My interpretation was that the artist is desperate because of how antagonistic our governments have become toward progress in the field of mediating climate change. Within the US, that includes our withdrawal from the 2015 Paris Agreement, the conversion of the EPA into an agency that promotes poisoning, and the disappearance of the Department of Energy from the public purview. Up until now, these toxic measures were confined to the United States but Australia has just joined the parade. Australia, the world’s largest exporter of coal, has given up on mitigating its effects. But the country’s government and accompanying attitude about climate change changes as often as I change my socks (just kidding – don’t run away).

Basically, Australia has decided to join the US in fighting against climate change mitigation for the sake of political expediency. Australia’s newest government promises to deregulate the coal and oil industries at a faster rate than even the US could dream of – but as I said, governments and regulations are subject to change.

Industry leaders and consumers all around the world are striving toward sustainability; they realize that in the long term, such a thing requires serious consideration of the environmental impact of our energy use. In other words, the world is making progress not because of environmental regulations but in spite of them.

*(Two days after I started writing this, the prime minister of Australia was deposed again. I have no idea about the impact this latest upheaval will have on the government’s climate change policy).

I took a look at the world’s progress via the ten most populated nations in a series earlier this year (February 20 – March 20, 2018) but by the time that this blog is posted, my students will already be in session, so it seems like a great time to renew the discussion. I’m including 7 charts, which (in my scientific mind) is a good way to demonstrate the progress that we are making globally in the face of this spate of governmental reversals.

Figure 1 shows the global annual changes in energy production by fuel, comparing recent distribution to averages of the last 43 years. We see a sharp decline in coal, nuclear energy, and natural gas, while oil and alternative energy are on the rise. The last entry on the right side of the graph also indicates that we are becoming more energy efficient in producing our GDP. 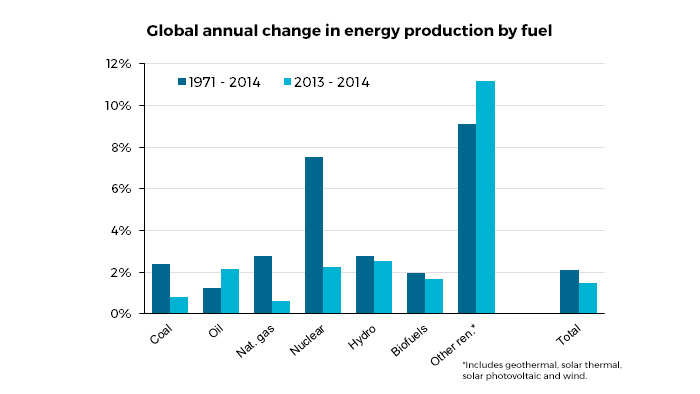 Figure 2 shows that our GDP throughout most of this period has increased at a steady pace, when adjusted for inflation. 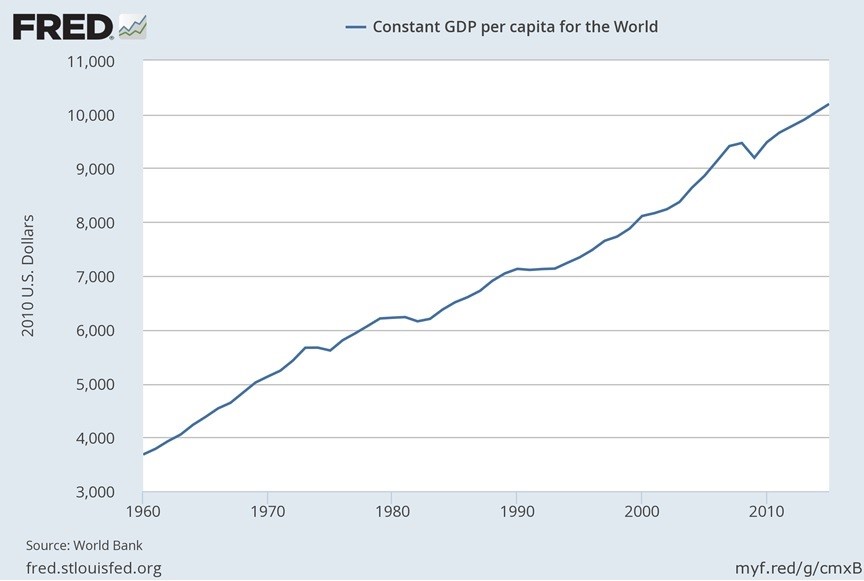 Figure 2 – Constant GDP/Capita for the world, in US$ 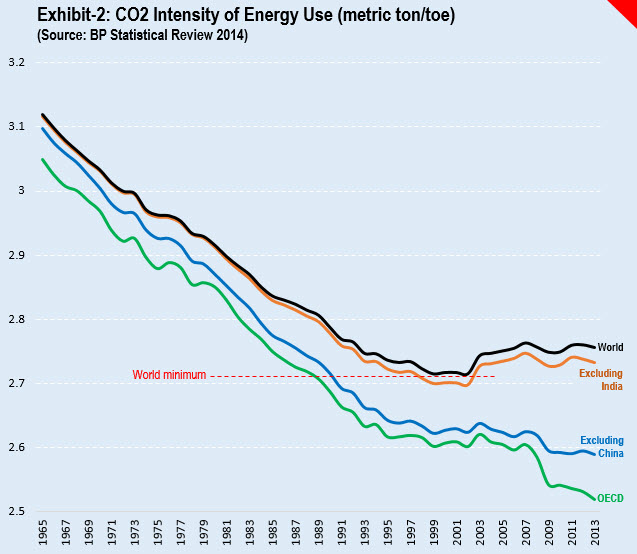 Figure 3 is interesting because it measures different groups of countries’ changes in carbon intensity – i.e. the burning of fossil fuels that directly causes climate change. Within the OECD, a group of mostly rich countries, the decline in carbon intensity is steady. Globally, the same is true if one excludes China. China is the main agent that undermines this steady progress. Its leadership does believe in the impact of climate change but its relatively sharp economic growth makes reducing emissions a more challenging task.

Meanwhile, we are experiencing a shift in the personal transportation sphere. The global popularity of smart phones makes communication easier and thus facilitates the sharing of all kind of items, including cars. Correspondingly, demands for private car ownership are decreasing. Services such as Uber and Lyft, and most car companies are now working on autonomous private vehicles that aim to make owning and using personal cars unnecessary. Bloomberg published a piece that summarizes the trend: “Peak Car – the end of the car industry.” Figures 5, 6, and 7 are taken from this article.

Similarly, passenger car sales in the US are declining as shared and autonomous vehicles are projected to gain momentum.

It is also indicative that ride-sharing fleets are beefing up their numbers, responding to demand as well as anticipating future passengers.

Cars aside, the progress that we are making toward fully sustainable energy is too slow but it’s not just hot air. There’s no call for desperation just yet.