Climate Change Refugees: Where Will They Go?

Posted on January 28, 2020 by climatechangefork

I have seen some alarming new reports of late. Two of them describe the start of environmental, climate change-powered migrations within rich countries. In the US, the key motivator is sea level rise:

Australia’s raging bushfires are also starting to trigger major displacements that it is ill equipped to handle.

As Al Jazeera reports, the Davos forum (see last week’s blog) addressed the problem on a global scale. “Davos: World needs to prepare for ‘millions’ of climate refugees – Richer countries may become a rising source of refugees as climate change forces people to flee their countries.”

The world needs to prepare for a surge in refugees with potentially millions of people being driven from their homes by the impact of climate change, the United Nations High Commissioner for Refugees said on Tuesday.

Speaking to Reuters at the World Economic Forum in Davos, Switzerland, UN Commissioner Filippo Grandi said a UN ruling this week meant those fleeing as a result of climate change had to be treated by recipient countries as refugees, with broad implications for governments.

President Trump’s Davos response was a complete dismissal of climate science and scientists:

“They are the heirs of yesterday’s foolish fortune tellers,” the president said. “They predicted an overpopulation crisis in the 1960s, a mass starvation in the 70s, and an end of oil in the 1990s.”

“This is not a time for pessimism,” Mr. Trump declared, adding, “Fear and doubt is not a good thought process.”

Over my nearly nine years writing this blog, I have frequently talked about climate change refugees (see June 29 – July 12, 2016; April 3–10, 2018 blogs). I have consistently focused on those coming from developing countries, who are knocking on the borders of rich countries in search of safety. Clearly, at Davos, the UN recognized the trend and tried to convince these rich countries to recognize climate refugees as having similar rights to political ones.

Now the situation is quickly developing wherein rich countries are creating their own climate refugees. Where are these refugees supposed to go?

Well, last week, the peer-reviewed scientific journal PLOS ONE (from the Public Library of Science) published a paper that attempts to address this question within the United States:

Sea level rise in the United States will lead to large scale migration in the future. We propose a framework to examine future climate migration patterns using models of human migration. Our framework requires that we distinguish between historical versus climate driven migration and recognizes how the impacts of climate change can extend beyond the affected area. We apply our framework to simulate how migration, driven by sea level rise, differs from baseline migration patterns. Specifically, we couple a sea level rise model with a data-driven model of human migration and future population projections, creating a generalized joint model of climate driven migration that can be used to simulate population distributions under potential future sea level rise scenarios. The results of our case study suggest that the effects of sea level rise are pervasive, expanding beyond coastal areas via increased migration, and disproportionately affecting some areas of the United States.

In general, we find that previously “unpopular” migrant destinations (areas with relatively low numbers of incoming migrants) would be more popular solely due to their close proximity to counties that experience “direct effects”. The East Coast will experience larger effects than the West coast because of the large coastal population centers and shallower coastlines, indeed, all counties adjacent to coastal counties on the East coast are marked as indirectly affected. Existing urban areas will receive the largest magnitudes of migrants, as they represent the most attractive destinations, which will accelerate the existing trends of urbanization. We find that the southeast portion of the United States will experience disproportionately high effects from SLR-driven flooding due to the large vulnerable populations in New Orleans and Miami. These results show that by driving human migration, the impacts of SLR have the potential to be much farther reaching than the coastal areas which they will flood.

In other words, people will likely start moving to more rural, inland areas of the country in addition to flooding into already crowded cities. There is no question that the escalating environmental refugee issue poses—in addition to a massive humanitarian and economic challenge—a major security issue.

Indeed, a May 2019 publication by the US Army demonstrates the challenge:

According to a new U.S. Army report, Americans could face a horrifically grim future from climate change involving blackouts, disease, thirst, starvation and war. The study found that the US military itself might also collapse. This could all happen over the next two decades, the report notes.

The senior US government officials who wrote the report are from several key agencies including the Army, Defense Intelligence Agency, and NASA. The study called on the Pentagon to urgently prepare re for the possibility that domestic power, water, and food systems might collapse due to the impacts of climate change as we near mid-century.

I went to the original report. As far as reports go, it’s relatively short (50 pages). I strongly recommend reading it (I intend to use it in my classes).

While the Army is only one of four branches of the US armed forces—the rest include: the Air Force, Navy, and Marines—it is submitting its own climate change report. We have talked about this before. On September 9, 2014, I briefly mentioned a climate change report, “Global Trends 2030,” by the US National Intelligence Council (NIC) on the impacts of climate change on US national security. Congress has mandated that the NIC produce one every four years. That report also stresses the main details of climate change, including the important role that sea level rise and the surge of environmental refugees play in impacting US security.

However, the next report in this series, “Global Trends 2035,” which I covered on May 23, 2017, presented a very different vista. It came out about five months after the inauguration of President Trump. Initially, when it was posted, it looked like it would be a continuation of the previous “Global Trends 2030.” But shortly after, clicking on the posted report brought up something that was hardly recognizable. Indeed, it is nearly impossible to find the phrase “climate change” in it—an almost complete denial of the issue, expressed as deliberate blindness. Nor was the change of wording an anomaly. The federal government has made widespread attempts to eliminate climate change from its vocabulary.

There have been exceptions – a movie, “The Age of Consequences” (see April 9, 2019 blog), made with overwhelming participation from uniformed soldiers, described climate change as a major destabilizer and an important accelerator of global insecurity. Even in this context, however, the film framed the growing number of global environmental refugees as the main culprit.

The newest Army report that I mentioned above came out one year before the next election. It’s becoming more difficult to deny that climate change is occurring, given that we are seeing its effects everywhere. In a sense, the writers try to walk the line between two contradicting political landscapes. They emphasize certain aspects of the problem while pointedly ignoring others. For instance, they don’t distinguish between anthropogenic (man-made) and natural climate change, although they know full well that most data and most scientists attribute nearly 100% of climate change (distinguished from specific weather) to humans.

On the other hand, the report takes a novel step—its Executive Summary lists all the steps that must be taken to mitigate the impacts of climate change and approximates the resources needed to accomplish them. The steps themselves are neither groundbreaking nor army-specific; they are ones that every country, city, and industry needs to take. The report starts by identifying specific problems:

The report is also unique in that it discusses the thawing of the Arctic and the advantages that Russia, one of our “traditional” enemies can derive from that. The map below, taken from the report, demonstrates this threat. 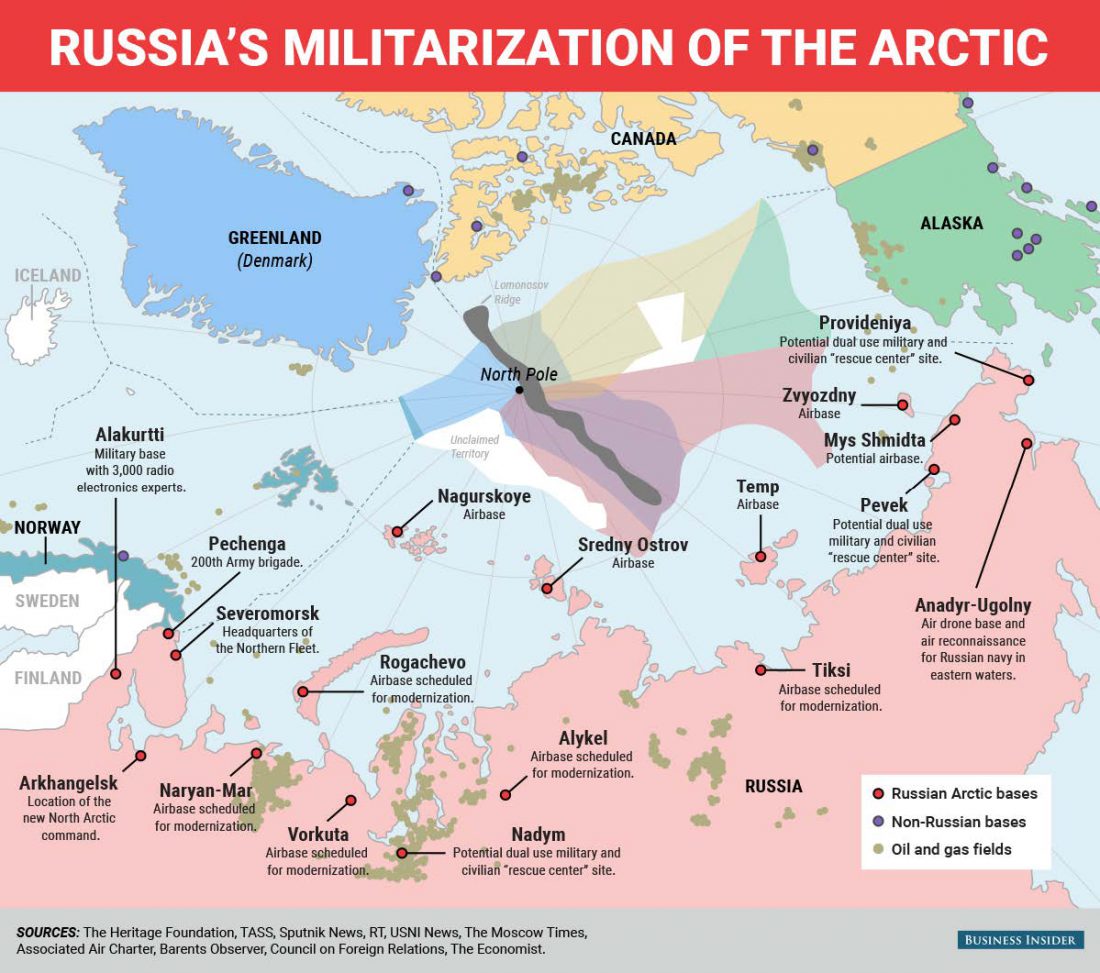 Clearly, climate change represents a security threat not just in terms of the refugees it produces but also militarily. I wish us all good luck in dealing with this mounting crisis. We’ll need it.

2 Responses to Climate Change Refugees: Where Will They Go?