Posted on January 21, 2020 by climatechangefork

The Davos meeting in Switzerland is in full swing. President Trump is there, as is Greta Thunberg; climate change will be at the top of the agenda. The World Economic Forum (WEF) is organizing the meeting. In preparation, the WEF, in collaboration with PwC (PricewaterhouseCoopers), issued a report on the impact of the state of the physical environment on the world’s economic activities: “Nature Risk Rising: Why the Crisis Engulfing Nature Matters for Business and the Economy.”

I am citing two of the key paragraphs but I strongly recommend that you review the whole 37-page report:

Risks emerging from dependency of business on nature

All businesses depend on natural capital assets and ecosystem services either directly or through their supply chains. Our research shows that $44 trillion of economic value generation – more than half of the world’s total GDP – is moderately or highly dependent on nature and its services, and therefore exposed to risks from nature loss.41 To estimate the extent to which the global economy depends on nature, we have assessed the reliance on natural capital assets of 163 economic sectors and examined them at an industry and regional level, based on the economic value creation of each industry. Our methodology is detailed in Appendix A.

Industries that are highly dependent on nature generate 15% of global GDP ($13 trillion), while moderately dependent industries generate 37% ($31 trillion). Together, the three largest sectors that are highly dependent on nature generate close to $8 trillion of gross value added (GVA42). These are construction ($4 trillion), agriculture ($2.5 trillion) and food and beverages43 ($1.4 trillion). This is roughly twice the size of the German economy. Such sectors rely on either the direct extraction of resources from forests and oceans or the provision of ecosystem services such as healthy soils, clean water, pollination and a stable climate. As nature loses its capacity to provide such services, these sectors could suffer significant losses.

Scientists and politicians no longer have a monopoly on speaking about the dangers of the global impacts of accelerating climate change. Nor are we restricted to computer-simulated long-term predictions. We see the damage on a daily basis—both physically and monetarily—and (at least some of us) realize that the impacts will reach us all.

Around the world, some are moving climate change from polite (or not!) discussions about what might take place in the distant future to more concrete ones about immediate consequences. If we don’t take steps to minimize the impacts and insure ourselves against major effects, we will pay the price. It’s an inevitability—the only questions are how soon and how much.

Real estate is obviously one of the first casualties. The industry is impacted by almost everything that climate change can throw at us: sea level rise, extreme weather, fires, etc. Significant parts of the real estate industry are financed through debt; that debt accumulates as the disasters pile up. Last week I looked at the Federal Reserve’s efforts to include climate change risk in its analysis of real estate transactions.

An article from News Landed summarizes the climate change-fueled economic losses in some major US cities.

United States taxpayers are on the edge of bankruptcy with loss of safety due to an increase in change of climate. “There may be a threat to the availability of the 30-year mortgage in various vulnerable and highly exposed areas,” Berman wrote in the San Francisco Fed report…

Currently, the US owes $3.8 trillion due to the extreme weather events and loss of property of worth. The following picture shows the loss caused by climate change. 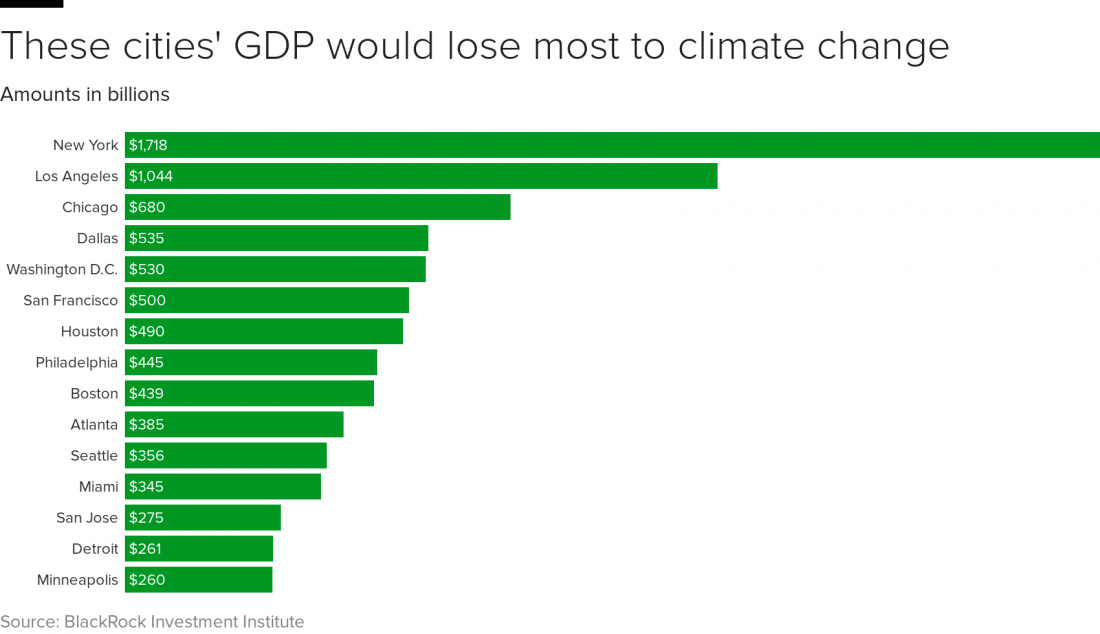 In an exclusive interview with Andrew, the money management giant’s chief, Larry Fink, discussed his decision to make climate change a focus of BlackRock’s investment strategy. The shift could reshape how Wall Street invests.

What BlackRock will do, according to Mr. Fink’s latest letter to C.E.O.s:

— Exit certain investments that have a “high sustainability-related risk” — but not all, since fossil fuels remain central to the global economy.

— Start to press corporate managers on their environmental goals, including leaning on companies to adhere to the Paris climate accord’s targets.

BlackRock is the world’s largest asset manager; it controls around 7 trillion US$ in assets. When it speaks, the world listens.

Figure 2 shows a map of the continuous (monetary) environmental losses in the US from 2002-2017. 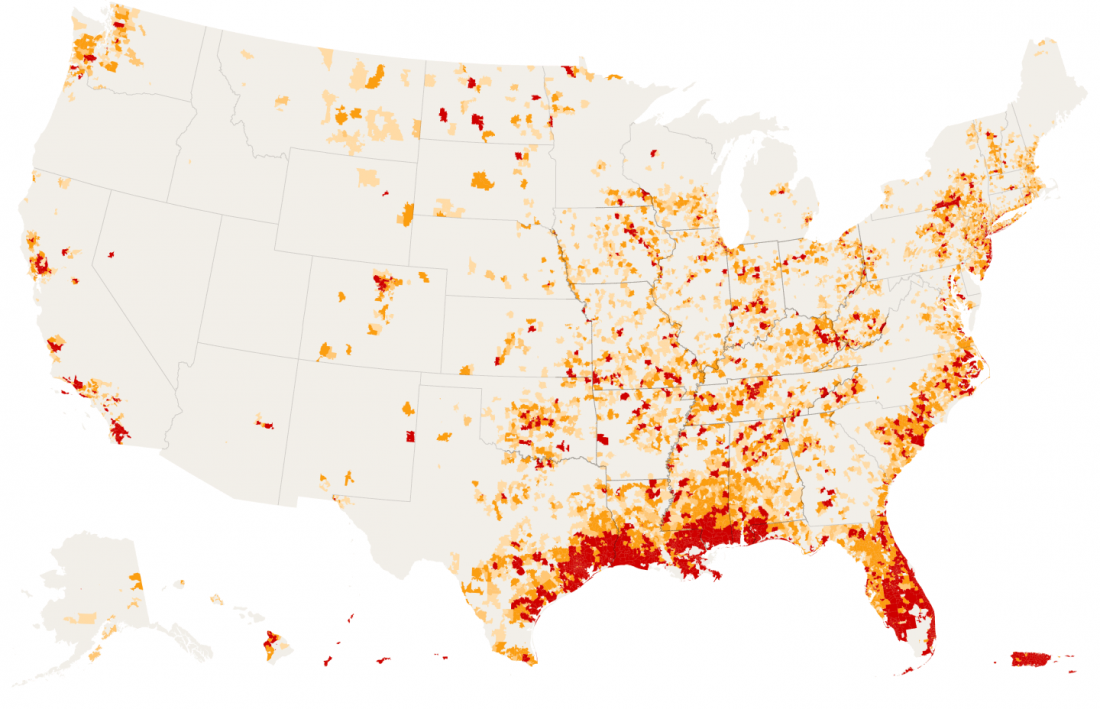 The lightest yellow dots above represent losses of $150,000. The darkest red ones amount to over $5 million over the 15-year period:

In the last 16 years, parts of Louisiana have been struck by six hurricanes. Areas near San Diego were devastated by three particularly vicious wildfire seasons. And a town in eastern Kentucky has been pummeled by at least nine storms severe enough to warrant federal assistance.

Here is what the NYT writes about the longer-term viability of investing in properties that are subjected to such risks.

WASHINGTON — Banks are shielding themselves from climate change at taxpayers’ expense by shifting riskier mortgages — such as those in coastal areas — off their books and over to the federal government, new research suggests.

The findings echo the subprime lending crisis of 2008, when unexpected drops in home values cascaded through the economy and triggered recession. One difference this time is that those values would be less likely to rebound, because many of the homes literally would be underwater.

In other words, the financial powers are dumping responsibility for at-risk areas in the US on the federal government. The latter just keeps rebuilding on top of the wreckage, ensuring a cycle of climate-caused destruction.

Canada is dealing with these issues somewhat differently:

GATINEAU, Quebec — Along the coast of the United States, people who lost homes to Hurricane Dorian are preparing to rebuild. But Canada — which has faced devastating flooding of its own — is testing a very different idea of disaster recovery: Forcing people to move.

Unlike the United States, which will repeatedly help pay for people to rebuild in place, Canada has responded to the escalating costs of climate change by limiting aid after disasters, and even telling people to leave their homes. It is an experiment that has exposed a complex mix of relief, anger and loss as entire neighborhoods are removed, house by house.

Some parts of the US are trying to adopt similar policies. For example:

Nashville is trying to move people like the Laidlaws away from flood-prone areas. The voluntary program uses a combination of federal, state and local funds to offer market value for their homes. If the owners accept the offer, they move out, the city razes the house and prohibits future development. The acquired land becomes an absorbent creekside buffer, much of it serving as parks with playgrounds and walking paths.

Climate change is increasing the program’s urgency. While a number of cities around the country have similar relocation projects to address increased flooding, disaster mitigation experts consider Nashville’s a model that other communities would be wise to learn from: The United States spends far more on helping people rebuild after disasters than preventing problems.

What are the impacts on the mortgage markets?

Climate change could punch a hole through the financial system by making 30-year home mortgages — the lifeblood of the American housing market — effectively unobtainable in entire regions across parts of the U.S.

That’s what the future could look like without policy to address climate change, according to the latest research from the Federal Reserve Bank of San Francisco. The bank is considering these and other risks on Friday in an unprecedented conference on the economics of climate change.

For the financial sector, adapting to climate change isn’t just an issue of improving their market share. “It is a function of where there will be a market at all,” wrote Jesse Keenan, a scholar who studies climate adaptation, in the Fed’s introduction.

In the next blog I will focus on how climate change is already impacting our national security.