Posted on April 6, 2021 by climatechangefork

I started to write this blog a day after President Biden presented his infrastructure plan in Pittsburgh, Pennsylvania. The location’s symbolism was obvious; this was the same city where President Trump announced his withdrawal from the Paris Agreement:

President Biden announced the US return to the Paris Agreement via executive order on the day of his inauguration. His real assurances, however, came during his April 1st speech, when he proclaimed his intention to codify his administration’s commitment to climate change mitigation via an innovative new piece of legislation. The plan is big on almost every level. Not only does he address the return to the Paris Agreement but he also details his approach to the overlapping issues of COVID-19, climate change, jobs, equity, and population rise (see my Venn diagram in my August 4, 2020 blog).

Tables 1-3 show the details of this new “American Jobs Plan.” I will try to address them in the next few blogs. This week I want to highlight the magnitude of the proposed budget and its distribution, specifically in the context of the global post-Paris-Agreement situation.

In addition to the three sections shown above, $400 billion are proposed for “in-home care.” This money is targeted to: “Expand access to caregiving for those who are older and those with disabilities, and to improve pay and benefits for care givers.”

These are the main goals of the plan’s three sections:

Transportation: To revitalize the aging or crumbling corridors that get American people and products from place to place, while reducing the sector’s reliance on fossil fuels that drive climate change.

Jobs and Innovations: The president has said that he wants to position America to compete against China and other rivals in the race to build and dominate industries of the future, like semiconductors and advanced batteries.

At this stage, the plan is a proposal, not a legislative commitment. In this sense, it is similar to the Paris Agreement (great intentions but little enforcement/implementation power). Right now, the size and the scope of the plan make it vulnerable to cherry-picking by both supporters and opponents. Serious questions remain in terms of timing (the plan is supposed to take the rest of the decade) and payment (suggested distribution over the next 15 years). The soonest, most important commitment in terms of timing is the promise of carbon-free electric power delivery by 2035.

Meanwhile, with regards to the rest of the world, a blog from Columbia University’s Earth Institute summarized the global climate change mitigation efforts since the Paris Agreement:

The Paris Agreement calls for countries to make their pledges to reduce emissions — called nationally determined contributions (NDCs) — more ambitious every five years; the first step-up was to occur at the end of 2020. According to the Climate Vulnerable Forum, only 73 countries proposed revised goals, with 69 countries including the E.U., U.K., Argentina, and Ethiopia submitting more ambitious emissions reduction targets.

Several other countries, including Russia, have kept the status quo. Brazil’s new pledge has effectively backtracked, and while Brazil did propose a 2060 net-zero goal, this would be contingent on receiving $10 billion a year in climate finance from other countries. Later this year, at COP 26, all other parties will have to submit updated NDCs.

The critical question, however, is whether or not countries can translate their long-term net-zero goals into the short-term policies that are necessary to realize them. 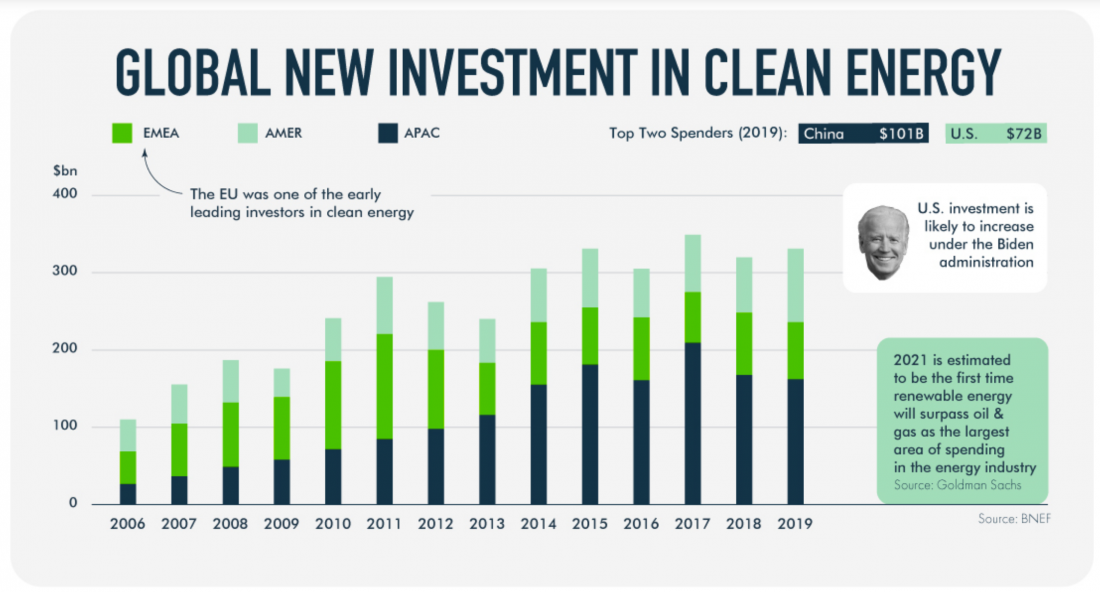 I will continue to follow both domestic and foreign implementation/follow-up of these plans and commitments over the next few months.

Micha Tomkiewicz, Ph.D., is a professor of physics in the Department of Physics, Brooklyn College, the City University of New York. He is also a professor of physics and chemistry in the School for Graduate Studies of the City University of New York. In addition, he is the founding-director of the Environmental Studies Program at Brooklyn College as well as director of the Electrochemistry Institute at that same institution.
View all posts by climatechangefork →
This entry was posted in Climate Change, Sustainability, US and tagged Adaptation, American jobs plan, Biden, budget, building, Climate Change, Cost, Electricity, Energy, Future, Infrastructure, jobs, law, manufacturing, Mitigation, Paris, Paris Agreement, Pittsburgh, Research, transportation, Trump, utilities. Bookmark the permalink.

1 Response to The American Jobs Plan