Posted on July 6, 2021 by climatechangefork

The “heat dome” has been at the top of the news in recent days, starting almost immediately after the official start of summer on Sunday, June 20th. Sonya Landau, the editor of this blog, wrote a beautiful and timely guest post (June 22nd), reporting from under the dome in Tucson, Arizona. While it has resulted in dangerous heat in areas already known for their hot summers, this enormous dome has also had disastrous consequences in historically cooler regions like the Pacific Northwest. Press outlets have explained the heat dome as a result of high pressure in the atmosphere that blocks the dissipation of heat. Well, that certainly fits the description of the effects of the greenhouse gases that now cover the world. Wikipedia gives us a basic definition:

A greenhouse gas (GHG or GhG) is a gas that absorbs and emits radiant energy within the thermal infrared range, causing the greenhouse effect.

Last Monday, an Op-Ed in The New York Times, “That Heat Dome? Yeah, It’s Climate Change,” provided a more technical explanation of the heat dome in northwestern US and Canada:

The heat wave afflicting the Pacific Northwest is characterized by what is known as an omega block pattern, because of the shape the sharply curving jet stream makes, like the Greek letter omega (Ω). This omega curve is part of a pattern of pronounced north-south wiggles made by the jet stream as it traverses the Northern Hemisphere. It is an example of a phenomenon known as wave resonance, which scientists (including one of us) have shown is increasingly favored by the considerable warming of the Arctic.

The Op-Ed warned us that the heat dome is huge now and similar phenomena will only get a lot worse and more frequent unless we do something to slow them down. A recent report by the IEA (see last week’s blog) enumerated some of the steps we can take to make that happen. An article from December 2019 quotes some experts who argue that climate change is accelerating and we are all living under the threat:

I thought it was time to quantify the concept.

NOAA (National Oceanic and Atmospheric Administration) and the Scripps Institution recently published the most up-to-date data of the atmospheric carbon dioxide concentrations measured at the Mauna Loa Observatory in Hawaii (see December 1, 2015 blog). These data are shown in Figure 1. 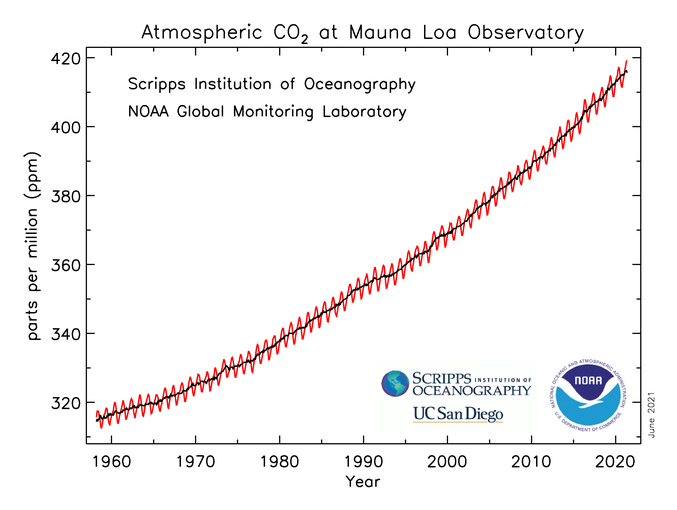 Back in 2015, I looked at a curve similar to Figure 1 and explained the yearly oscillations:

However, [the figure] also shows something else: superimposed on the steady CO2 concentrations in Mauna Loa are very regular oscillations. Such oscillations are absent from similar measurements taken in Antarctica and they vary with the latitude of the site. These oscillations directly exemplify the yearly cycle and the difference between each site’s carbon dioxide source and its sink. The fluctuations represent the full complexities of the carbon cycle as it equilibrates between the land, the air, and the ocean. The yearly cycles shown in Figure 3 were attributed to the large percentage of trees in the northern hemisphere that shed their leaves in the fall and regrow them in the spring. The corresponding result is that less carbon dioxide is captured during the winter than in the summer.

A simple inspection of Figure 1 makes it clear that the carbon dioxide emissions not only increase with time but accelerate. Fortunately, NOAA’s report also includes a table of the changes in the yearly emissions rates. This data is shown in Figure 3, from which we can see a linear increase in these rates: a constant acceleration. 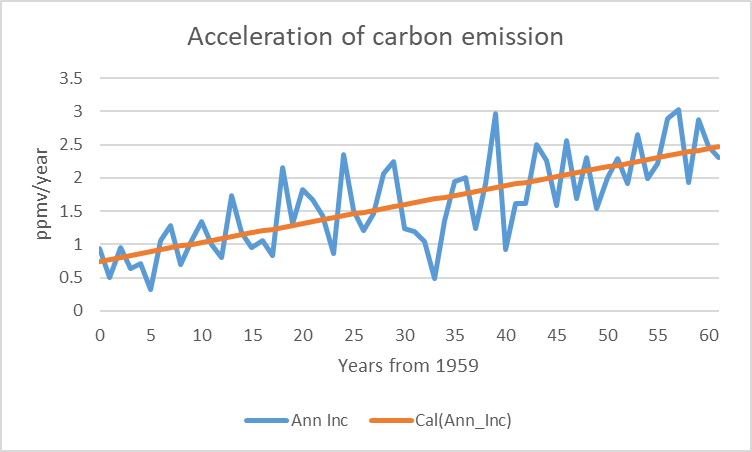 One-dimensional motion with constant acceleration is defined as:

Where X is the displacement, V is velocity, A is acceleration, and t is time.

Velocity is defined as:

The straight line in Figure 3, which was analyzed to give the best fit with the oscillations, has a slope of 0.028 ppmv/(year)2 and an intercept of 0.75 ppmv/year (parts per million volume, a common unit for concentrations of greenhouse gases in the air.

We can put these parameter values into Equation 1 to calculate when, assuming constant acceleration values, the concentration of carbon dioxide will double to 560 ppmv, compared to the pre-Industrial Revolution concentration of 280 ppmv:

Solving for t, we get 110 years after the start of Figure 1 in 1959, which puts us in 2069. That’s beyond my lifetime but well within the expected lifetime of my children and grandchildren. It’s also way before the definition of “Now” in my book.

The change in global air temperature that corresponds to doubling the carbon dioxide concentration relative to preindustrial conditions is called “climate sensitivity.” This is probably the most important parameter to connect the carbon atmospheric concentration to global temperature.

Of course, the timing estimates in this blog are completely independent of any computer simulations, modeling, or scenario building. They rely completely on experimental results over the last 60 years, which include, among other developments, the worst pandemic in the last 100 years. The data show that the acceleration in the concentration of carbon dioxide over this period has been constant and we can assume that it will stay that way over the next 50 years unless we change global policies in significant ways.

Next week, I’ll discuss the significance of reaching the carbon sensitivity point in terms of temperature and livability. Meanwhile, you can scan through an earlier blog (July 10, 2018) on the role of feedback in estimating atmospheric concentrations of carbon dioxide and the expected temperature changes.

Micha Tomkiewicz, Ph.D., is a professor of physics in the Department of Physics, Brooklyn College, the City University of New York. He is also a professor of physics and chemistry in the School for Graduate Studies of the City University of New York. In addition, he is the founding-director of the Environmental Studies Program at Brooklyn College as well as director of the Electrochemistry Institute at that same institution.
View all posts by climatechangefork →
This entry was posted in Anthropocene, Climate Change, Extreme Weather and tagged carbon dioxide, carbon emissions, CO2, CO2 emissions, dome, Emissions, heat, heat dome, Mauna Loa, NOAA, oscillation. Bookmark the permalink.