The Social Cost of Carbon

Posted on August 24, 2021 by climatechangefork

Things are changing. My courses start tomorrow. Originally, I was scheduled to teach face-to-face but for a variety of reasons, I’m back to online-only. Many of my colleagues are still scheduled for either face-to-face or “hybrid” teaching, where at least some classes will be held on campus.

Summer is finally beginning the transition into fall (the official end of summer is September 22nd but it feels like it’s already here). I continue to monitor the NYT climate list (August 18, 2020 blog) daily, scanning the temperatures in the major global cities. I haven’t seen many instances of three-digit temperatures in the US lately and most of these have popped up in the usual places such as Las Vegas and Phoenix. In the Middle East, Baghdad, Damascus, and Riyadh are still experiencing three-digit heat. I haven’t seen it hit 100o anywhere in Europe but Athens is very close. It’s gotten so bad that they have just created a new position and appointed a “Chief Heat Officer” with the hopes to cool it down. Luckily, Africa and the rest of North and South America remain under 100o. Even so, NOAA has just declared July 2021 the Earth’s hottest month on record. Our full attention is still focused on COVID-19, but this summer has woken up a lot of people to the reality of climate change and its corresponding physical and fiscal costs.

In the last few blogs, I have tried to summarize the effects that global warming is having on mortality. I have also looked at the Biden administration’s attempts to allocate resources to fight climate change. They’ve been successful so far, garnering trillions of dollars. What I have not discussed is the potential cost of doing nothing. Economists can estimate this with something called the “social cost of carbon.” I have mentioned the term briefly in earlier blogs (January 8 and March 5, 2019), in which I relied on the National Academy of Science definition. It’s time to revisit the concept on a broader basis. The Trump administration did everything in its power to minimize the use of this metric. Unsurprisingly, one of the first things that President Biden did was to ask a group of economists to revisit the issue.

This blog is focused on the general explanation of the concept through the Wikipedia entry, and a summary of the most recent estimate. As Figure 1 shows, according to the new estimate, the social cost of carbon increased from less than $10/ton at the previous count to over $50/ton of carbon dioxide. To get a feeling of what these round numbers actually mean, we have to return to my July 6, 2021 blog, where I estimated the anthropogenic (human-based) contributions of carbon dioxide in a business-as-usual scenario. The present concentration of carbon dioxide is 400ppmv. Before the industrial revolution, it was only 280ppmv. The unit of 400ppmv is equivalent to 3 trillion tons of carbon dioxide. In other words, we have already added a trillion tons to the atmosphere. If we take the newly calculated social cost of carbon of $50/ton from Figure 1, this addition has already cost us $50 trillion. In my July 6th blog, I estimated that in a business-as-usual scenario, we will double the pre-industrial concentration of carbon dioxide by 2069. That would mean adding approximately another 200ppmv or 2 trillion tons of carbon dioxide, costing us $100 trillion more. With these kinds of numbers, it is worthwhile to pay attention to details. 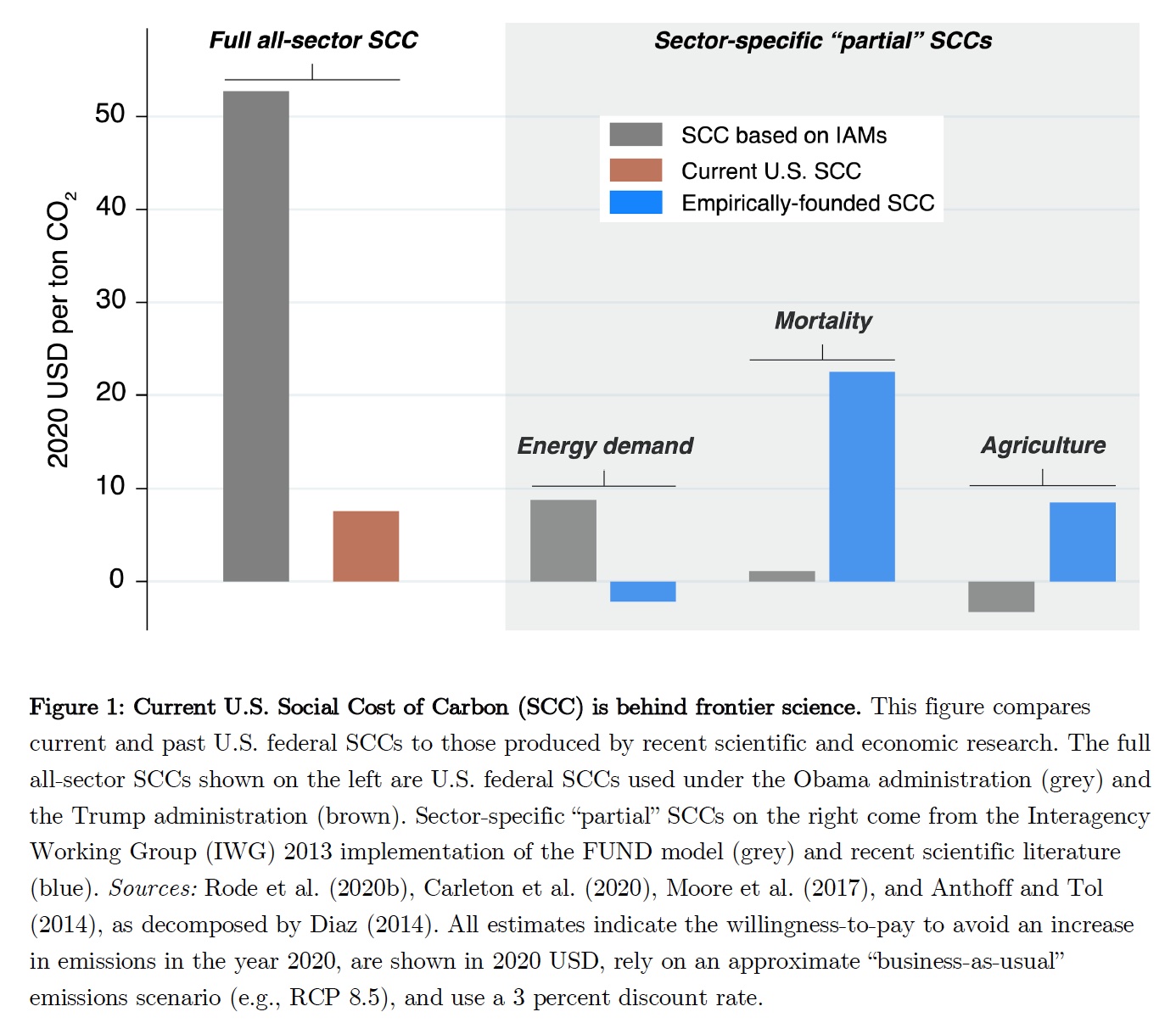 Let’s start with some Wikipedia definitions before we move on to details of the new calculations:

Social cost in neoclassical economics is the sum of the private costs resulting from a transaction and the costs imposed on the consumers as a consequence of being exposed to the transaction for which they are not compensated or charged.[1] In other words, it is the sum of private and external costs. This might be applied to any number of economic problems: for example, social cost of carbon has been explored to better understand the costs of carbon emissions for proposed economic solutions such as a carbon tax.

Private costs refer to direct costs to the producer for producing the good or service. Social cost includes these private costs and the additional costs (or external costs) associated with the production of the good for which are not accounted for by the free market. In short, when the consequences of an action cannot be taken by the initiator, we will have external costs in the society. We will have private costs when initiator can take responsibility for agent’s action.[2]

Mathematically, social marginal cost is the sum of private marginal cost and the external costs.[3] For example, when selling a glass of lemonade at a lemonade stand, the private costs involved in this transaction are the costs of the lemons and the sugar and the water that are ingredients to the lemonade, the opportunity cost of the labor to combine them into lemonade, as well as any transaction costs, such as walking to the stand. An example of marginal damages associated with social costs of driving includes wear and tear, congestion, and the decreased quality of life due to drunks driving or impatience, and many people displaced from their homes and localities due to construction work. Another social cost of driving includes the pollution driving costs to other people in the society. For both private costs and external costs, the agents involved are assumed to be optimizing.[2]

The alternative to the above neoclassical definition is provided by the heterodox economics theory of social costs by K. William Kapp. Social costs are here defined as the socialized portion of the total costs of production, i.e., the costs which businesses shift to society in their attempts to increase their profits.[4]

This section is an excerpt from Social cost of carbon[edit]

The social cost of carbon (SCC) is the marginal cost of the impacts caused by emitting one extra tonne of greenhouse gas (carbon dioxide equivalent) at any point in time, inclusive of ‘non-market’ impacts on the environment and human health.[11] The purpose of putting a price on a ton of emitted CO
2 is to aid policymakers or other legislators in evaluating whether a policy designed to curb climate change is justified. The social cost of carbon is a calculation focused on taking corrective measures on climate change which can be deemed a form of market failure.[12]

An intuitive way of looking at this is as follows: if the price of carbon is $50 per tonne in 2030, and we currently have a technology that can reduce emissions by 1 million metric tonnes in 2030, then any investment amount below $50 million minus interests would make economic sense, while any amount over that would lead us to consider investing the money somewhere else, and paying to reduce emissions in 2030.[13]

A team from the University of Chicago wrote a critically important paper that includes Figures 1 and 2. The document itself is 50 pages long, so I am only including the abstract of this paper and the figures, which summarize the team’s research and recommendations.  I urge you to refer to the original paper to make up your own opinion.

Abstract: This paper outlines a two-step process to return the United States government’s Social Cost of Carbon (SCC) to the frontier of economics and climate science. The first step is to implement the original 2009-2010 Inter-agency Working Group (IWG) framework using a discount rate of 2%. This can be done immediately and will result in an SCC for 2020 of $125. The second step is to reconvene a new IWG tasked with comprehensively updating the SCC over the course of several months that would involve the integration of multiple recent advances in economics and science. We detail these advances here and provide recommendations on their integration into a new SCC estimation framework. 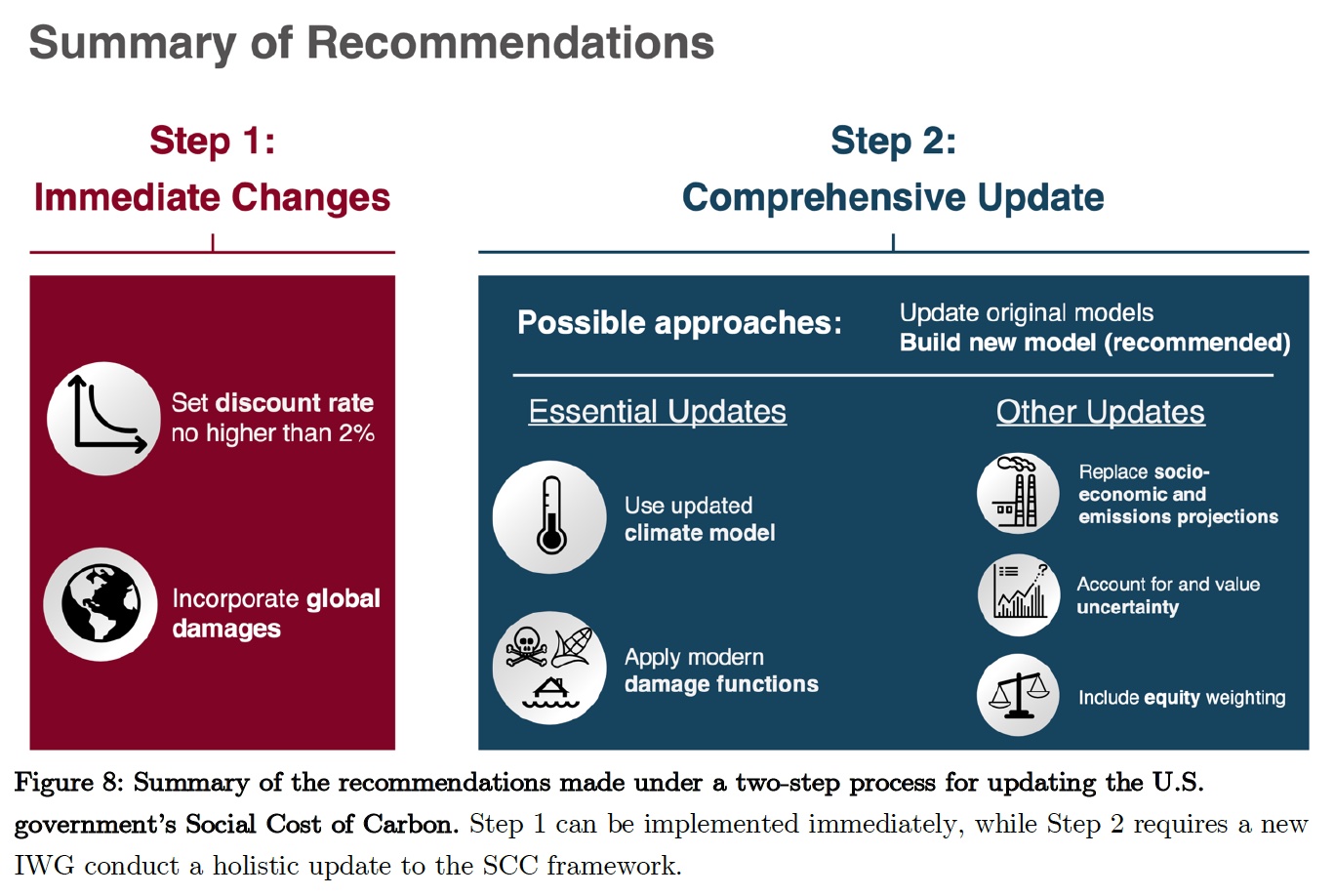 Next week, I will apply the concept of the social cost of carbon to specific current situations, including climate change’s impacts on supply chains, insurance estimates, and the actual cost of fighting fires, floods, droughts, etc.

Meanwhile, I’m curious about your thoughts. Do you think the US should bring back the social cost classification for policymaking?

Micha Tomkiewicz, Ph.D., is a professor of physics in the Department of Physics, Brooklyn College, the City University of New York. He is also a professor of physics and chemistry in the School for Graduate Studies of the City University of New York. In addition, he is the founding-director of the Environmental Studies Program at Brooklyn College as well as director of the Electrochemistry Institute at that same institution.
View all posts by climatechangefork →
This entry was posted in Anthropogenic, Climate Change, Economics, Sustainability, US and tagged Agriculture, business as usual, Carbon, carbon emissions, Climate Change, CO2, Cost, damages, Demand, Economics, Emissions, Energy, equity, Extreme Weather, Global Warming, mortality, Obama, scc, Science, social cost, socioeconomic, Supply, Trump, US. Bookmark the permalink.