Posted on May 3, 2022 by climatechangefork 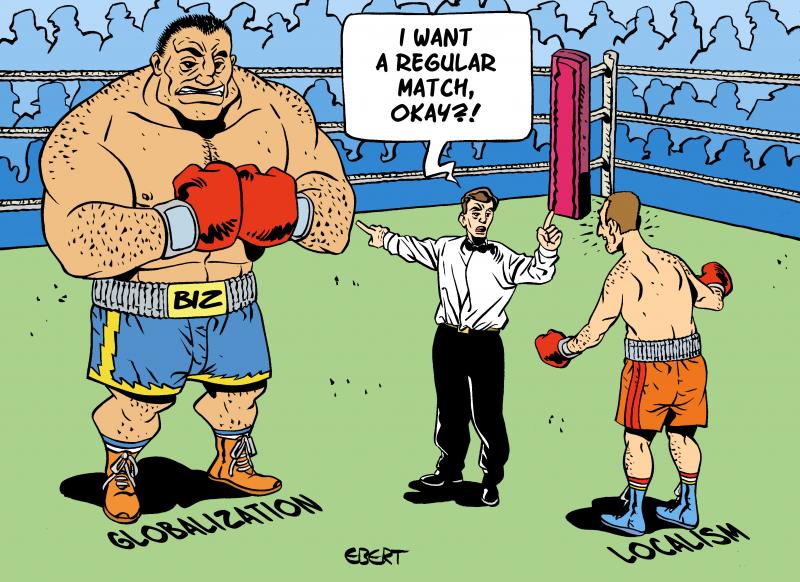 I have summarized the overlapping global challenges that the world is now facing in multiple previous blogs. The burning issue that all of us must address is how to confront them. The cartoon above emphasizes that the conflict between globalization and localism is not a “fair fight.” Globalization is portrayed as bigger and meaner. However, as in many other organizational structures such as family, workplace, city, country, etc., there are many forms of globalization. We have the ability to join forces to achieve some common objective or we can split up and fight against each other to gain individual advantages. What is missing in the caricature above is that the local fighter is actually a part of the global fighter. So, in a sense, the big fighter is fighting himself. In a sense, the situation resembles my repeated characterization of global impacts of climate, if left unabetted toward the end of the century (search the site for the term, “self-inflicted genocide”). Any civil war can be characterized this way. The Russian invasion of Ukraine, and the genocidal remnants that they leave behind, are short-term (how short, none of us knows) tests of many aspects of globalization. As in any war, there are winners and losers on both sides.

The current international security system has nearly expired. It’s rotted through. Its remains have collapsed and buried the world order beneath. Trying to revive it is futile.

Clockwork toys, robots’ mechanical ancestors, became fashionable with the European royal courts during the Thirty Years’ War in the 17th century. But the first world conflict in European history, a series of interconnected wars, resulted in something even more important: creation of the first world order ever.

Since then, the system of international relations has been based on the Peace of Westphalia 1648 and its core principles: national sovereignty, foreign and domestic policies separation, compromise as a means of reconciling conflicting national interests, equality of sovereign states, and negotiating relations between them.

All the subsequent systems were in fact more or less successful attempts to amend this order to ensure the balance of interests of leading states (known as the Great Powers).

This tendency was clearly traced from the Congress of Vienna in 1815 to the Potsdam Conference in 1945. Between the dates, attempts to reject any of the principles of the Peace of Westphalia would inevitably lead to new conflicts. The Great Powers’ aspirations to impose their own will on the rest of the world by force brought the nightmare of two world wars. Or, as some historians rightly point out, the Second Thirty Years’ War of 1914-1945.

Now history repeats itself. Russia’s war on Ukraine is a rejection of all Westphalian principles. We are denied the right to sovereignty. We are under pressure to change our domestic policy. Under the guise of compromise, we are offered surrender. We are denied subjectivity and therefore equality. Our civilians are being tortured and killed en masse for simply being Ukrainian citizens.

Another article offers a different perspective, much more focused on the war’s economic impact on the EU:

WASHINGTON, April 21 (Reuters) – The war in Ukraine has shown the limitations of the decades-long German approach of seeking to change Russia through trade and spells the end of globalisation as we know it, the European Economic Commissioner Paolo Gentiloni said on Thursday.

“This crisis will also spell the end of globalisation as we have known it and reshape global alliances,” Gentiloni said.

“The war and its consequences – including the successive rounds of sanctions that the EU and the US have imposed on Russia – are exacerbating pressures on already strained global supply chains,” he said.

Gentiloni said the invasion also forced the 27-nation European Union to sharply boost spending on defense, on top of the already large, planned investment on fighting climate change and adapting the economy to the digital age.

Beyond the suffering and humanitarian crisis from Russia’s invasion of Ukraine, the entire global economy will feel the effects of slower growth and faster inflation.

Impacts will flow through three main channels. One, higher prices for commodities like food and energy will push up inflation further, in turn eroding the value of incomes and weighing on demand. Two, neighboring economies in particular will grapple with disrupted trade, supply chains, and remittances as well as an historic surge in refugee flows. And three, reduced business confidence and higher investor uncertainty will weigh on asset prices, tightening financial conditions and potentially spurring capital outflows from emerging markets.

Russia and Ukraine are major commodities producers, and disruptions have caused global prices to soar, especially for oil and natural gas. Food costs have jumped, with wheat, for which Ukraine and Russia make up 30 percent of global exports, reaching a record.

The use of economic sanctions/incentives as a tool for mitigating climate change emerged even before the Russian invasion. This article is from last summer:

The U.S. government has used sanctions to fight corruption and human rights abuses around the world. Sanctions can also help to deter climate-destroying behavior.

In 2017,  the U.S. government hit billionaire mining magnate Dan Gertler with economic and travel sanctions that sharply curtailed his ability to do business in the United States. The Treasury Department alleged Gertler had engaged in wide-ranging corrupt practices in pursuing mega deals to exploit natural resources in the Democratic Republic of Congo. Sanctions of the type put on Gertler are a key tool in the U.S. government’s diplomatic arsenal and can generate real pain for those sanctioned.

The drivers of climate change link closely to illegal resource extraction, corruption, and human rights abuses. Illegal deforestation in the Amazon, for example, has not only harmed the climate but has also led to widespread violations of Indigenous rights.

Two Democratic lawmakers are proposing that the U.S. government use sanctions to help stop some of the most egregious forms of climate destruction. Senator Ed Markey (D-Mass.) and Representative Veronica Escobar (D-Texas) have introduced the Targeting Environmental and Climate Recklessness Act (TECRA), which would empower the U.S. government to use its powerful sanctions tools in response to apply economic and travel sanctions to individuals engaging in climate-destroying activities. It’s an approach that reflects the aggressiveness and innovation that are desperately needed to take on the global climate crisis.

All of this brings to focus the stresses between global and local interests that were of constant concern during President Trump’s tenure. His famous slogan, MAGA (Make American Great Again) (See previous blogs such as June 27, 2017 and Dec 21, 2021), was a cry for local isolationism. A somewhat more objective look at the advantages and disadvantages of relying on globalization in trying to govern locally can be found below. These are the headers of the arguments; the full article includes more detailed descriptions:

Such “score keeping” of globalization is focused on “me” (the individual country): i.e., what advantages or disadvantages will globalization give “me”? The global response to the Russian invasion of Ukraine is a good example of how the world will handle the global energy crises on which much of the conflict is anchored. One element that is continuously lacking in any attempts to institute global policy standards is the absence of effective global enforcement. I will try to deal with this issue in future blogs.