Extinctions in the Anthropocene

Posted on February 3, 2015 by climatechangefork

Yesterday (Wednesday) was the first day of classes in my school. I am scheduled to teach two related courses this semester: Energy Use and Climate Change for advanced undergraduates, and Physics & Society for physics seniors and graduate students. I am going to start both courses with the picture shown in Figure 1. At first glance, one might confuse the picture either with mediocre art or maybe more generously with science fiction. Yet the picture comes from an article that was just published in Science magazine, one of the most prestigious publications in science (I subscribe to it, but anybody can download this picture through Google images). I mentioned that article, “Marine Defaunation: Animal Loss in the Global Ocean,” (Science, 347, 247 (2015)) last week, together with the book The Sixth Extinction by Elizabeth Kolbert. Both publications deal with species extinctions of the past, present and future. The picture shows an artist’s representation of how the world once looked and how it might look in the future, both on land and in the ocean. As always, there is no way of knowing what the future will actually bring; the best we can do is to base our suppositions on models that we hope can inform us about what the future will entail. In this case, the picture’s scope extends from 50,000 years ago – the approximate time that early modern humans started to spread from Africa to Asia and Europe – to toward the end of this century (what I call the “End of Now” in my book).

To fit the provided space, the horizontal baseline was presented on a logarithmic scale (August 6, 2012 blog). Additionally, to give us an idea of the environment, not only do the climates of the past and present show up on the middle of the diagram, but the projected IPCC temperature rise (October 14, 2014) is superimposed on the area that represents the future.

The starting supposition in both publications is that we are now living in the Anthropocene (May 14, 2013 blog) period. “Officially” we are not there yet, but with 7 billion people (as of October 2012) and growing, the change in designation becomes inevitable and humans will soon officially become the dominant part of the “natural environment.” A fully qualified group is now discussing the issue, Here is their charge: 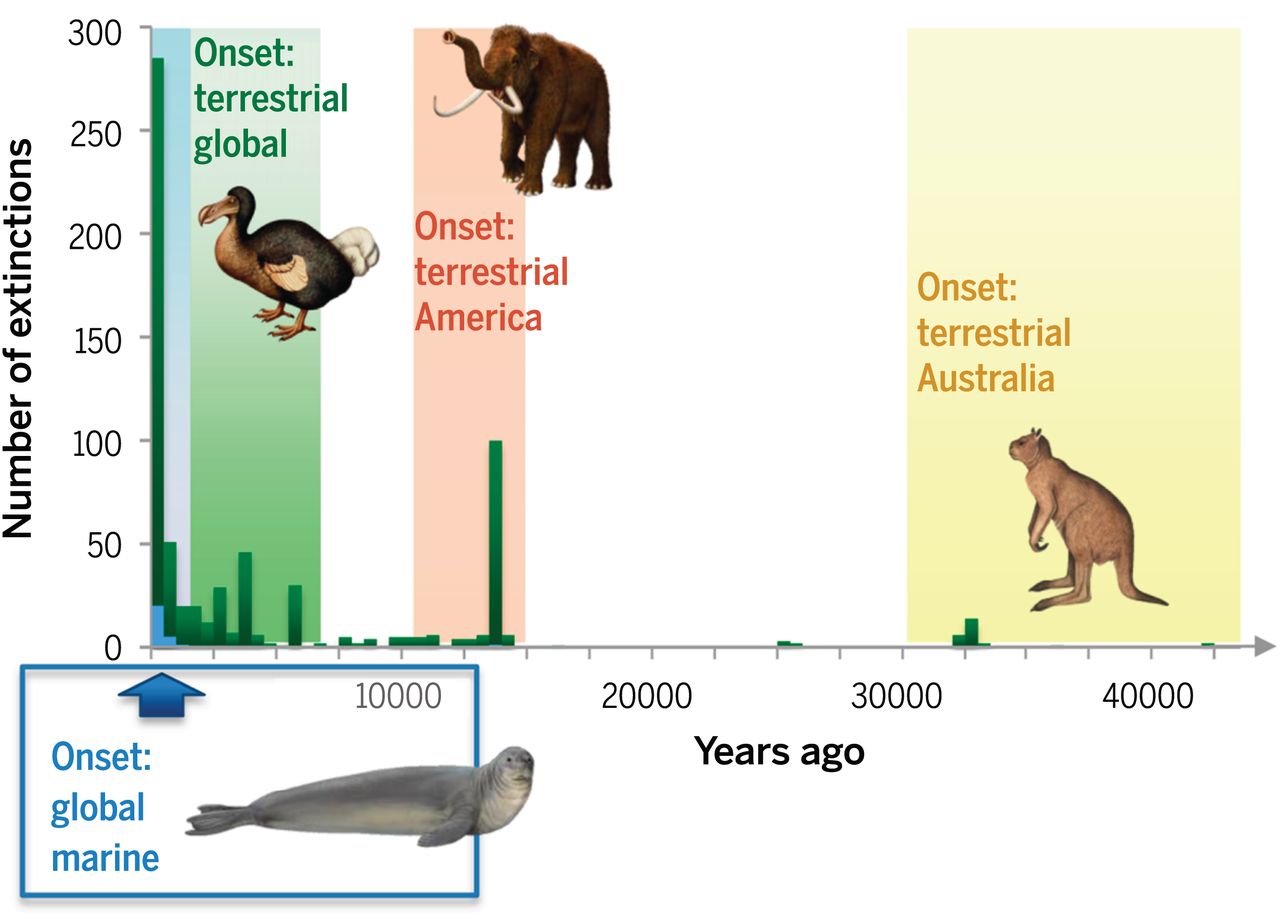 Kolbert’s book takes the position that we were basically dominant as soon as humans started to move around about 50,000 years ago. Her reasoning is that we almost immediately started to use killing tools whose effectiveness were independent from our body size and our physical strength. The book focuses on the role that humans play throughout the entire period depicted by the picture. There is no question in my mind that the official designation of the time period will not be quite so broad.

The Science paper emphasizes defaunation in the oceans; its main argument is that in comparison with that on land, the process started much more recently in marine environments, and thus, in principle, is still reversible. Figure 2 illustrates the timeline for land defaunation (again, the image was posted through Google Images, not directly taken from the Science paper). The loss of species shown is confined mostly to megafauna – a class of animals often defined as having body mass that exceeds 45 kg. Many of these species became extinct in Australia between 16,000 – 50,000 BCE. These include monotremes, various marsupials (the largest one exceeding 2 tons), big birds, and large reptiles. There has long been a dispute over who is to blame for these extinctions, but recent studies show a clear “preference” for humans as a cause.

Here is a short (non-exhaustive) list of what is included among the North American megafauna:

Pleistocene fauna in North America included giant sloths; short-faced bears; several species of tapirs; peccaries (Including the long nosed and flat-headed peccaries); the American lion; giant tortoises; Miracinonyx (“American cheetahs”, not true cheetahs); saber-toothed cats like Smilodon and the scimitar cat, Homotherium; dire wolves; saiga; camelids such as two species of now extinct llamas and Camelops; at least two species of bison; stag-moose; the shrub-ox and Harlan’s muskox; 14 species of pronghorn (of which 13 are now extinct); horses; mammoths and mastodons; the beautiful armadillo and the giant armadillo-like Glyptotherium and giant beavers as well as birds like giant condors and other teratorns. The nine-foot sabertooth salmon lived at the time as well. In contrast, today the largest North American land animal is the American bison.

The global extinction phase in the figure is represented by the dodo, an animal that became extinct once the island of Mauritius was settled by humans (July 30, 2013 blog). Mass marine extinction, which is shown as a small vertical blue line that hugs the origin of the figure, only started in the 20th Century, with the advent of industrialized fishing.

The Science paper differentiates between these different kinds of extinctions:

Defaunation has caused numerous geographic range constrictions in marine animal species, driving them locally extinct in many habitats. These effects have been particularly severe among large pelagic fishes, where ~90% of studied species have exhibited range contractions (8, 14) (Fig. 3). Local extinctions, however, are not unique to large pelagic predators. Close to a third of the marine fishes and invertebrates off the North American coasts that can be reliably sampled in scientific trawl surveys (often small to medium bodied species) have also exhibited range contractions (Fig. 3). Such contractions can result from the direct elimination of vulnerable subpopulations or from region-wide declines in abundance (14). Available data suggest that the magnitude of the range on tractions for this diverse set of trawl-surveyed marine species is, on average, less than the contractions observed for terrestrial animals such as mammals, birds, and butterflies. Though data deficiencies are abundant, most marine animal species also do not yet seem to exhibit some of the most extreme range contractions recorded for terrestrial animals. Asian tigers, for example, have lost ~93% of their historical range (15), whereas tiger sharks still range across the world’s oceans (16).

Reductions in the abundance of marine animals have been well documented in the oceans (17). Aggregated population trend data suggest that in the last four decades, marine vertebrates (fish, seabirds, sea turtles, and marine mammals) have declined in abundance by on average 22% (18). Marine fishes have declined in aggregate by 38% (17), and certain baleen whales by 80 to 90% (19). Many of these declines have been termed ecological extinctions—although the species in question are still extant, they are no longer sufficiently abundant to perform their functional roles. Ecological extinctions are well known in terrestrial environments and have been demonstrated to be just as disruptive as species extinctions (20). On land, we know of the phenomenon of “empty forests” where ecological extinctions of forest fauna alter tree recruitment, reshape plant dispersal, and cause population explosions of small mammals (1, 20, 21). We are now observing the proliferation of “empty reefs,” “empty estuaries,” and “empty bays” (7, 14, 22).

Species that drop below an abundance level at which they can be economically harvested are extinct from a commercial standpoint. On land, commercial extinctions affected species ranging from chinchilla to bison (23). Cases of commercial extinction are also common in the oceans. Gray whales were commercially hunted starting in the 1840s.

By 1900, their numbers were so depleted that targeted harvest of this species was no longer regionally tenable (24). Likewise, the great whales in Antarctica were serially hunted to commercial extinction (25). Not all species, however, are so “lucky” as to have human harvesters desist when they become extremely rare. Demand and prices for certain highly prized marine wildlife can continue to increase as these animals become less abundant—a phenomenon termed the anthropogenic Allee effect (26). Individual bluefin tuna can sell for >US$100,000, rare sea cucumbers >US$400/kg, and high-quality shark fins for >US$100/kg. Such species are the rhinos of the ocean—they may never be too rare to be hunted.

How could man – a comparatively small animal with (at best) a bow and arrow, be responsible for the extinction of beasts such as the wooly mammoth? Kolbert’s book presents an interesting theory: big animals like the mammoth or today’s African elephants and rhinos are big for a reason. They didn’t use to have any natural enemies.

A very large animal is living on the edge with respect to its reproductive rate. The gestation period of an elephant, for example, is twenty two months. Elephants don’t have twins, and they don’t start to reproduce until they are in their teens.

With such restrictions, they can survive only because they didn’t have predators that could take them on. Once man was able to develop the tools and the social skills to take them on, they didn’t stand a chance. It’s true that the human population was still small and the people killed only the animals that they needed for survival. With the help of computer modeling, however, researchers have found that such a dynamic was more than enough to cause mass extinction within a few hundred years – in geological time, that is an instant.

In the oceans, the process is just starting. 70% of the Earth is covered by oceans, which have an average depth that exceeds 2.2 miles. Marine animal ranges are naturally much larger than those of terrestrial animals with similar body weight. Man’s access is much more limited, or has been up to now. The balance has yet to be completely monopolized by humans. To some extent, fish can still flee from human predators as well as from the changing environment caused by anthropogenic climate change. However, our ever increasing population and technological developments are starting to close that gap. Hopefully, going on the business as usual warming scenario shown in Figure 1, we still have some time to restore the balance.

6 Responses to Extinctions in the Anthropocene