Posted on July 30, 2013 by climatechangefork

I am back from the climate change conference in Mauritius (See my July 2 blog for the full program). I was away for almost a month in total – a long time on the road. I visited a few countries in southern Africa on my way to Mauritius, and on the way back, I made a detour through Israel, where I visited friends and attended to some family business. In the next few blogs I will detail some of my observations, starting here, with a short description of what I learned during the conference.

I have attended several conferences in the past. This one focused on adaptation to climate change in African countries. The most unique aspect of this conference was the relatively large participation of African researchers, including quite a few from Mauritius, Nigeria, Ghana, Kenya, Uganda and South Africa. This was further emphasized by additional contributions from researchers in developed countries, who also focused their work on African countries. 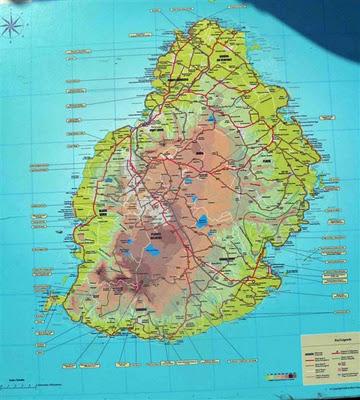 A map of Mauritius is shown above. It is a small, beautiful island that serves as home to about 1.3 million people.

In Mauritius, the people are obviously aware of the dangers of Climate Change. But unlike other small islands such as the Maldives, where President Mohammed Nasheed held an underwater cabinet meeting to emphasize the existential danger, Mauritius didn’t view the danger as immediately threatening to its existence until recently. One of the reasons is the topography of the island that is shown on the map above. The Maldives, the planet’s lowest country, with the lowest natural highest point, faces an impending risk of total submersion. In contrast, the center of Mauritius consists of high mountains (the highest mountain, Piton de la Petite Rivière Noire, is 2700 ft high). The capital, Port-Louis (population – 138,000), is also surrounded by beautiful mountains. The photograph below was taken from the window of my hotel where the conference was held. 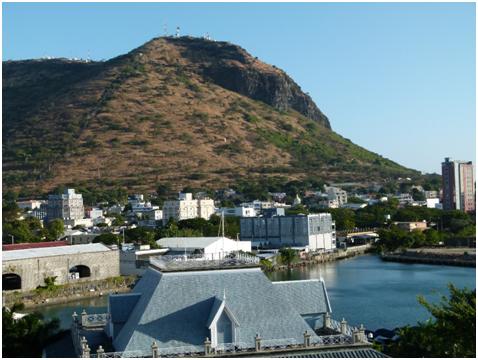 On March 30, 2013, however, the view was very different. The city experienced torrential flooding, with water coming from the surrounding mountains, and rendering the city almost invisible. Photographs of the flood are all over the internet. 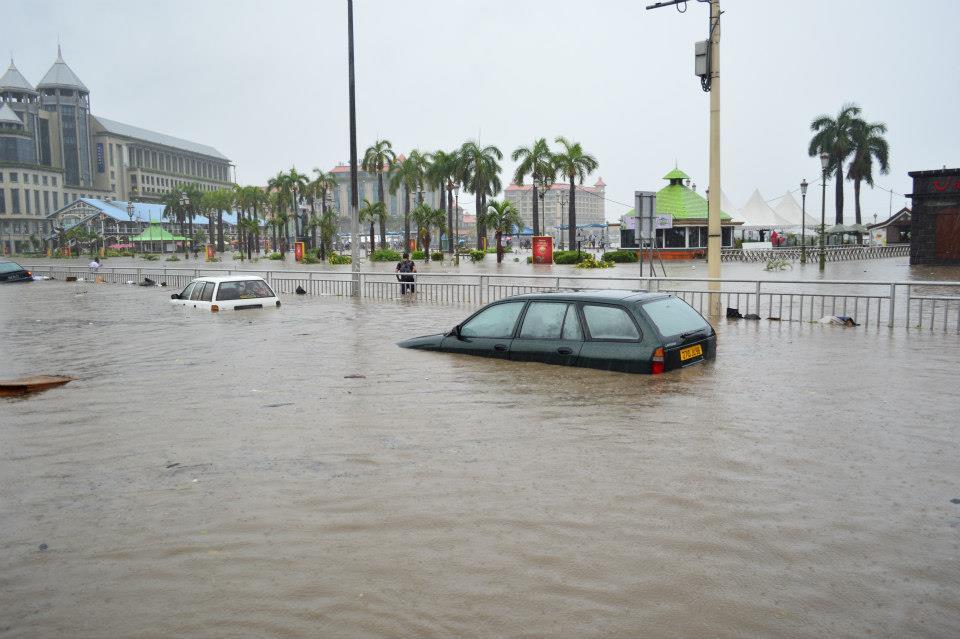 The intensification of extreme weather events, that climate change is causing, didn’t escape the government’s attention; the impact was not much different from that which hurricane Sandy had made on the United States a few months earlier.

Up to that point, Mauritius’ attitude towards climate change was similar to that of most other countries. On September 4, 2009, the Prime Minister’s Office set up a Steering Committee, which was made up of representatives from various Ministries and Departments, members of the Academia and international development partners. The committee’s objectives were:

The full report can be seen at the MID webpage.
On July 15, 2011, the Steering Committee was converted into the Commission on Maurice Ile Durable which operates under the aegis of the Prime Minister’s Office in collaboration with the Ministry of Environment and Sustainable Development and other stakeholders. The responsibility of the MID Commission is to ensure the finalization of the Action Plan on Maurice Ile Durable and its timely implementation. While the flooding has not ultimately made a direct change to policy initiatives, its effects have been visible in guiding conversations about the present and future of the country.

The Chair of the commission was one of the plenary speakers at the meeting. He recounted some of the steps that the MID has taken over the past few years, and summarized the report I mentioned above.

Other presentations focused on specific sections of the economy: mainly as it related to tourism and agriculture. Concerns for climate change’s predicted impact on tourism, for example, centered mostly on the changes to bio diversity, as well as on the quality of the beautiful beaches. The concern was that these changes, coupled with the vast array of competing tourist’s attractions all over the world, would discourage tourists from coming. The projected impact on agriculture through climate change’s impacts on weather patterns is a concern common to most countries; I will discuss it in a separate blog.

Micha Tomkiewicz, Ph.D., is a professor of physics in the Department of Physics, Brooklyn College, the City University of New York. He is also a professor of physics and chemistry in the School for Graduate Studies of the City University of New York. In addition, he is the founding-director of the Environmental Studies Program at Brooklyn College as well as director of the Electrochemistry Institute at that same institution.
View all posts by climatechangefork →
This entry was posted in Climate Change and tagged Adaptation, Africa, Agriculture, Climate Change, Climate Change Denial, Conference, Economy, Flood, Maldives, Maurice Ile Durable, Mauritius, MID, Mitigation, Sandy, Sustainable, Tourism. Bookmark the permalink.

6 Responses to Back From Mauritius