Posted on April 16, 2019 by climatechangefork

Last week, I talked about Philipp Blom’s book, “Nature’s Mutiny.” It illustrates some of the historical impacts of global climate change, especially with regards to the stress that it has inflicted on society. The book also looks into some of the consequences that have carried over into present day. Blom is a historian and confines his scope to the Little Ice Age’s effects on European societies in the 16–17th centuries.

Ironically, the best summary of the book’s connection between historical social developments and climate change is all the way in the Epilogue. For those of you who aren’t so patient as to read that far, here is a key paragraph from this section:

At the beginning of this book, I asked a straightforward question: What changes in a society when the climate changes: For the early modern period, it appears that the crisis of agriculture following environmental cooling accelerated a social and economic dynamism carried by a rising middle class, by stronger trade, empirical knowledge, expanding literacy, growing markets, and intellectual renewal. The result was a move from feudal to capitalist societies, from the fortress to the market.

There is a strong suggestion here that the change in climate gave rise to what we refer to today as “creative destruction.” In this blog, I will look at some of the physical indicators of this period and be specific about what we mean by “destructive.”

Daniel Gabriel Fahrenheit invented the first accurate thermometers and standardized their measurements at the peak of the Little Ice Age (using alcohol in 1709 and mercury in 1714). Yet we can now measure temperatures even further back by using proxies (paleothermometry in professional jargon).

Figure 1 shows temperature measurements for the past two thousand years, as reconstructed by different scientists using proxies such as ice cores, tree rings, sub-fossil pollen, boreholes, corals, lake and ocean sediments, etc. We can see that the results roughly agree with the variabilities in each proxy. The solid black line on the right shows direct measurements. The most recent value (2016) is also shown. The figure as a whole demonstrates the so-called hockey stick shape – approximately flat (average) variability throughout history, with a sharp rise in the 20th century when the anthropogenic contributions started to increase exponentially. We can also see the temperature profile of the Little Ice Age and the medieval warm period that preceded it. 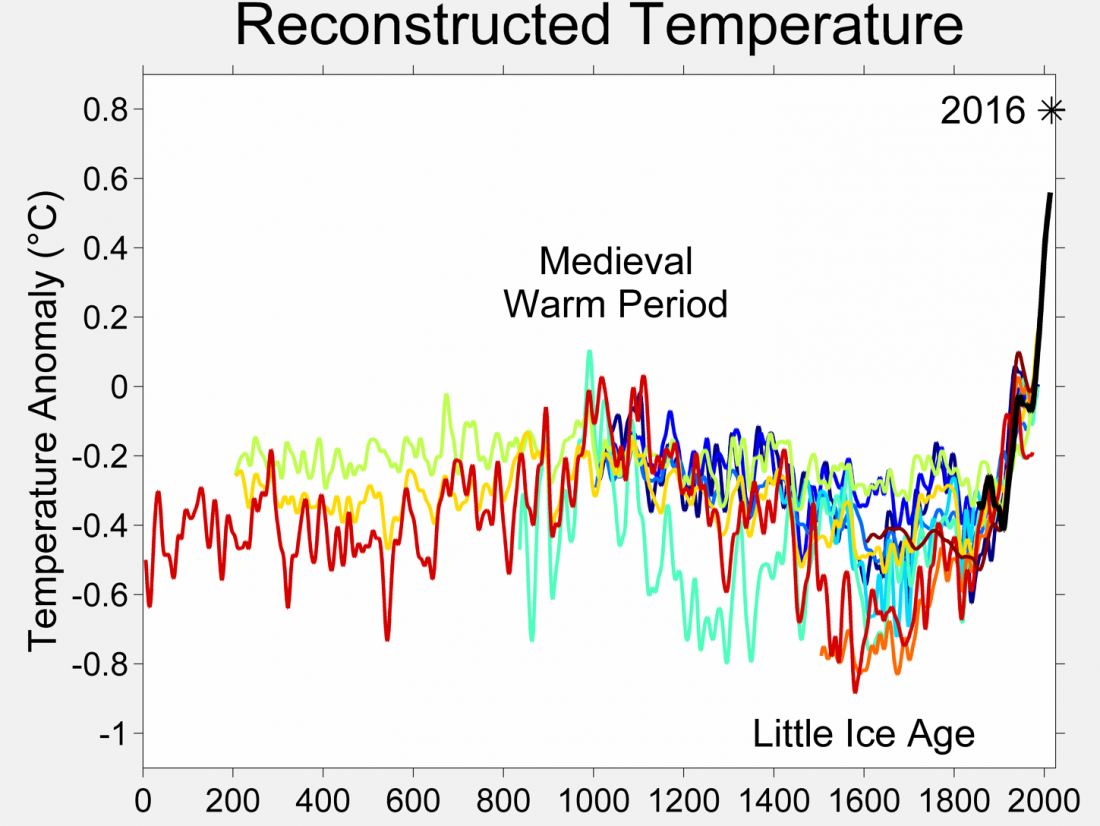 The way that the Little Ice Age follows the medieval warm period so quickly leaves me to think that another effect, not mentioned in Blom’s book, played an important role in the socioeconomic response from the European population at the time. This missing factor is called the “shifting baseline syndrome,” which I addressed in my April 18, 2017 blog. Most of the agricultural practices during the Little Ice Age were set earlier, in warmer times. The general impact of a baseline on many of our practices (see fishing in Figure 2) must always be considered. Namely, what worked for previous generations will not always work for newer ones, once the definition of what is “normal” changes along with the physical environment.

I would like to address the “destruction” part of the phrase, “creative destruction.” Here is a list taken from a site that analyzes some of the consequences of the Little Ice Age:

Great Famine
Beginning in the spring of 1315, cold weather and torrential rains decimated crops and livestock across Europe. Class warfare and political strife destabilized formerly prosperous countries as millions of people starved, setting the stage for the crises of the Late Middle Ages. According to reports, some desperate Europeans resorted to cannibalism during the so-called Great Famine, which persisted until the early 1320s.

Black Death
Typically considered an outbreak of the bubonic plague, which is transmitted by rats and fleas, the Black Death wreaked havoc on Europe, North Africa and Central Asia in the mid-14th century. It killed an estimated 75 million people, including 30 to 60 percent of Europe’s population. Some experts have tied the outbreak to the food shortages of the Little Ice Age, which purportedly weakened human immune systems while allowing rats to flourish.

Manchu Conquest of China
In the first half of the 17th century, famines and floods caused by unusually cold, dry weather enfeebled China’s ruling Ming Dynasty. Unable to pay their taxes, peasants rose up in revolt and by 1644 had overthrown the imperial authorities. Manchurian invaders from the north capitalized on the power vacuum by crossing the Great Wall, allying with the rebels and establishing the Qing Dynasty.

Witch Hunts
In 1484, Pope Innocent VIII recognized the existence of witches and echoed popular sentiment by blaming them for the cold temperatures and resulting misfortunes plaguing Europe. His declaration ushered in an era of hysteria, accusations and executions on both sides of the Atlantic. Historians have shown that surges in European witch trials coincided with some of the Little Ice Age’s most bitter phases during the 16th and 17th centuries.

Thirty Years’ War
Among other military conflicts, the brutal Thirty Years’ War between Protestants and Catholics across central Europe has been linked to the Little Ice Age. Chilly conditions curbed agricultural production and inflated grain prices, fueling civil discontent and weakening the economies of European powers. These factors indirectly plunged much of the continent into war from 1618 to 1648, according to this model.

Rise of the Potato
When Spanish conquistadors first introduced the potato in the late 16th century, Europeans scoffed at the unfamiliar starch. In the mid-1700s, however, some countries began promoting the hardy tuber as an alternative to crops indigenous to the region, which often failed to withstand the Little Ice Age’s colder seasons. It soon caught on with farmers throughout Europe, particularly in Ireland.

French Revolution
As the 18th century drew to a close, two decades of poor cereal harvests, drought, cattle disease and skyrocketing bread prices had kindled unrest among peasants and the urban poor in France. Many expressed their desperation and resentment toward a regime that imposed heavy taxes yet failed to provide relief by rioting, looting and striking. Tensions erupted into the French Revolution of 1789, which some historians have connected to the Little Ice Age.

Writing of “Frankenstein”
In 1816, dust from volcanic eruptions and the general chill of the Little Ice Age resulted in the famously frosty “year without a summer” across the Northern Hemisphere. Like many Europeans, teenage runaway Mary Shelley kept warm by huddling around a fire with her friends. One of them, the poet Lord Byron, encouraged his companions to write and share their own supernatural tales; Mary’s was published two years later as “Frankenstein; or, The Modern Prometheus.”

Invention of the Bicycle
Also in 1816, a meager oat harvest forced many German farmers to shoot their starving horses. The subsequent need for transportation that didn’t require food is thought to have inspired the aristocrat Karl Drais von Sauerbronn to invent his “laufmaschine,” a pedal-free precursor to the modern bicycle.

Midwestern Population Explosion
On the other side of the Atlantic, the year without a summer convinced many New England residents to relocate. Horrified by escalating grain prices and June snowfalls, they settled in the Midwestern United States, providing a boost to the expansion movement that had begun two decades earlier.

In the next few weeks we will have a few guest blogs written by my students. Following those, I will return to the issue of how climate change is inducing global stress.

1 Response to The Little Ice Age