Posted on April 1, 2013 by climatechangefork

In mid January, while attending the AAAS meeting, I got an email from a friend that her grandson (a 4th grader) “needed” to do some science research for school and that the research was competitive and he would like very much to win a prize. Could I help? My first thought was to try an environmental “Paper Clips” (June 11, 2012) in the form of an energy audit and calculation of a carbon footprint. I had no idea if this would work with a fourth grader, but decided to put forward the suggestion and see how it played out. Through interactions with the parents, grandparents and indirectly with the fourth grader, the project eventually took shape.

Here is the result, followed by a guest blog written by the kid’s mother: 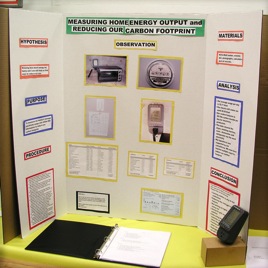 We would like to thank Professor Tomkiewicz for all of his time and patience, and most of all, for not screening his calls!!