Posted on July 15, 2014 by climatechangefork

In my last blog (July 8, 2014), I tried to summarize my goals for this blog, and take account of my progress to date. I ended with a short paragraph that described my efforts to educate my readers on the necessity of working toward a total global transformation of the way that we live. Under our current “business as usual” scenario (continuing the same patterns have used since the Industrial Revolution), we are – to use a popular but inexact expression – reaching the limit for the planet’s “Carrying Capacity” to accommodate our rate of global population growth and constant increase in the standard of living. I came out with the following short paragraph to describe what is needed:

The global transformation requires total energy transition to sustainable sources, recycling of finite national resources, reintroduction of fresh water use into the water cycle, curbing untapped exponential growth, establishing effective global governance and, probably most importantly, caring about each other

The first requirement was a total energy transition away from the present dependency on use of fossil fuel. Such fuels change the chemical composition of the atmosphere in a way that significantly impacts our energy balance with the sun, and alters the climate, leading us toward an uncharted and possibly uninhabitable future. I framed this idea previously (April 15, 2014) as a search for a “contemporary Joseph”:

Joseph’s achievement was predicting (based on interpreting God’s enlightenment in the form of Pharaoh’s dreams) the upcoming variability of food supply and rearranging the system accordingly: storing food in the good years to be distributed in the bad years.

If such an enlightening force were to show up today, what would be his/her job description? It would have to include preparing an infrastructure to adapt the world for a changing climate. The climate is changing at a human pace that has, and likely will continue to result in rising temperatures, sea level rise, and a rising variability of droughts and floods. This has/will also contribute to water stress, and therefore agricultural stress – mainly in the poorest parts of the world. Therefore, the job would also require alleviation of this water stress through energy-intensive desalination. In order to mitigate human-driven climate change, we need to go through energy transition; replacing predictable energy sources with highly variable ones.

Sustainable energy and water management are recurring issues throughout the blog. I went back through my more than two years of writing on this blog to find any gaps in my coverage, and I have decided that the most important element that I have missed was the need for storage. I will attempt to remedy that oversight in the next few blogs. After that, I hope to have finished Thomas Piketty’s book (see July 8, 2014 post), and be able to start trying to connect global economic inequities with attempts to mitigate climate change – a totally misunderstood issue, judging from my students’ responses.

Storage is an important element of effective management of resources, especially for both water and energy; however there is one central difference: water management already has one huge storage reservoir where we should focus – our oceans.

The total liquid water on Earth is 1.4 billion km3 (300 million miles3). Our oceans constitute more than 97% of that. The oceans act as large storage reservoirs which naturally supply the fresh water that we use through the water cycle. This supply can be also supplemented by way of energy intensive artificial desalination processes. The equivalent storage of energy are the fossil fuel reserves, on which we rely for energy withdrawals for 85% of our energy needs. As I have mentioned repeatedly before, the essence of the energy transition is to replace this source of energy with sources that don’t leave imprints on the chemistry of the atmosphere. These alternative energy sources include solar in its various forms (photovoltaic, thermal, wind and hydroelectric), nuclear and geothermal.

Even in the business as usual scenario of using our energy (85% from the “naturally stored” fossil fuels) our use of energy is highly variable. A typical variation in electricity use is shown in the two EIA (Energy Information Administration) figures below: 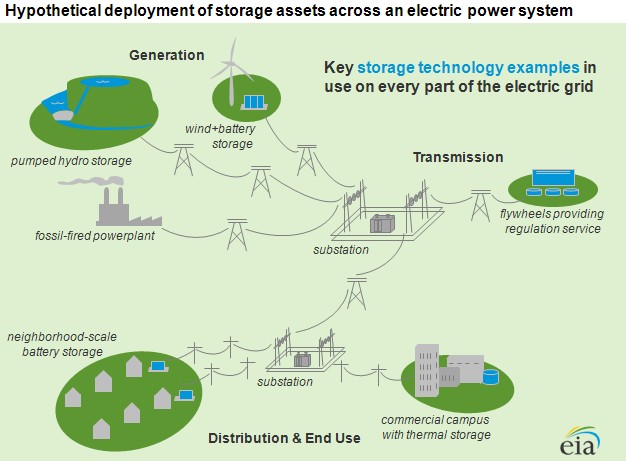 The delivered power has to be adjusted to the consumers’ demands. The only way to do such a thing is to store excess energy during low demand hours and use it at times of high demand. In the next blog I will discuss the technology of the available storage methods, following which, I will discuss the economics.

It’s important to remember that supplementing and substituting current fuel usage with sustainable energy sources in their various forms, necessitates a greater need for storage. In comparison to fossil fuels, sustainable energy requires more variability – a combination of a wider spatial array and more diverse base of energy sources and consumer distribution in order to deal with irregular consumer use. Patterns in consumer demand are more or less predictable. Patterns in availability of wind and solar are much less so, and grids have to be adjusted accordingly. There is a common view that successful energy transition to more sustainable energy sources will depend on the development of better and more cost effective storage devices. In future blogs I will explore the progress that is taking place towards achieving this objective.

Micha Tomkiewicz, Ph.D., is a professor of physics in the Department of Physics, Brooklyn College, the City University of New York. He is also a professor of physics and chemistry in the School for Graduate Studies of the City University of New York. In addition, he is the founding-director of the Environmental Studies Program at Brooklyn College as well as director of the Electrochemistry Institute at that same institution.
View all posts by climatechangefork →
This entry was posted in Climate Change and tagged Adaptation, Carrying Capacity, Clean Energy, Climate Change, Consumers, Delivery, Demand, Desalination, Distribution, Economics, EIA, Electricity, Emissions, Energy, Energy Sources, Environment, Fossil Fuels, Geothermal, Hydroelectric, Joseph, Management, Nuclear, Oceans, Photovoltaic, Power Plants, Reservoir, Resources, Science, Solar, Storage, Sustainability, Technology, Thermal, Thomas Piketty, Usage, Variability, Wind. Bookmark the permalink.