State Destruction and the Cuban Embargo

Posted on February 9, 2016 by climatechangefork

My small series of blogs regarding Cuba cannot possibly have a global impact on these issues, so what am I doing writing it?

In last week’s blog I warned about the dangers of a country (or group of countries) trying to destroy other states for its own political or economic reasons. I strongly implied that was the US’s aim with Cuba as of the Cuban revolution. Our government has used its economic embargo and intelligence operations toward that end.

Nuclear holocausts and disease pandemics aside, most of the anthropogenic impacts on the physical environment directly result from global population growth and that increasing population’s desire to increase their standard of living. The UN recently published a survey of future global population:

29 July 2015 – The world’s population is projected to reach 8.5 billion by 2030, 9.7 billion by 2050 and exceed 11 billion in 2100, with India expected to surpass China as the most populous around seven years from now and Nigeria overtaking the United States to become the world’s third largest country around 35 years from now, according to a new United Nations report released today.

Moreover, the report reveals that during the 2015-2050 period, half of the world’s population growth is expected to be concentrated in nine countries: India, Nigeria, Pakistan, Democratic Republic of the Congo, Ethiopia, Tanzania, the United States, Indonesia and Uganda.

The Paris COP21 meeting clearly showed that any global decision to mitigate global dangers rests on commitments and contributions from functional sovereign governments.

The monopoly of the legitimate use of physical force, also known as the monopoly on violence (German: Gewaltmonopol des Staates), is a core concept of modern public law, which goes back to Jean Bodin‘s 1576 work Les Six livres de la République and Thomas Hobbes‘ 1651 book Leviathan. As the defining conception of the state it was first described in sociology by Max Weber in his essay Politics as a Vocation (1919). Weber claims that the state is any “human community that successfully claims the monopoly of the legitimate use of physical force within a given territory”;[1] thus, “the modern state is a compulsory association which organizes domination.”[2] In other words, Weber describes the state as any organization that succeeds in holding the exclusive right to use, threaten, or authorize physical force against residents of its territory. Such a monopoly, according to Weber, must occur via a process of legitimation.

According to Raymond Aron, international relations are characterized by the absence of widely acknowledged legitimacy in the use of force between states.[3]

Regardless of whether one accepts the concept or not, with the present lack of enforceable global governance, the execution of any global policy rests with the states. Not all states have governments that can shoulder this responsibility.

The UN population projection lists 9 states whose near future population growth will have the strongest global impact. The table below provides the percentile rank of the 9 fastest growing countries; I have added Cuba for comparison. The World Bank ranks the quality of countries’ governance in terms of 6 indicators. Lower percentiles represent bad governance, while high percentiles equate to effective governance. 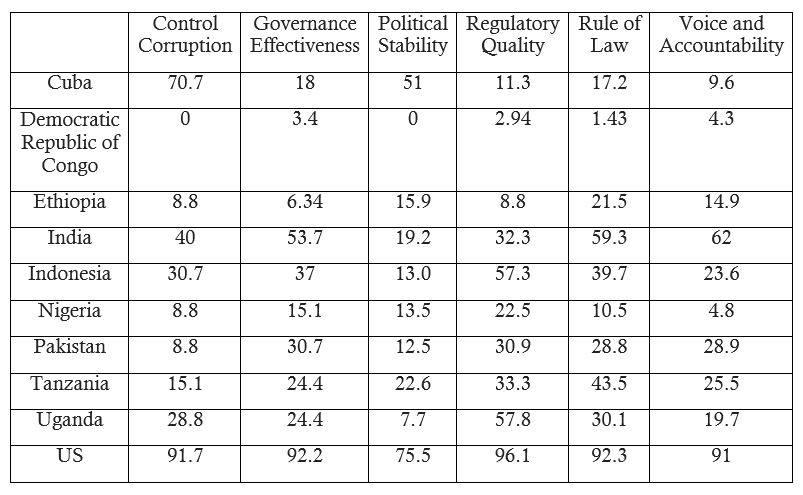 The UN population analysis predicts that by the end of the century Africa will surpass Asia as the most populated continent and grow to include more than 4 billion people. Five out of the nine fastest growing countries in the world are located in Africa, but those five are barely functioning states. A look at the table doesn’t inspire a great deal of confidence in these countries’ abilities to lead any global mitigation effort.

Cuba’s entry clearly indicates that its present governance has great room for improvement; it hardly needs the US to destabilize it further by way of the embargo.

The United States embargo against Cuba (in Cuba called el bloqueo, “the blockade”) is a commercial, economic, and financial embargo imposed by the United States on Cuba. An embargo was first imposed by the United States on Cuba on 19 October 1960 (almost two years after the Batista regime was deposed by the Cuban Revolution) when the U.S. placed an embargo on exports to Cuba except for food and medicine after Cuba nationalized American-owned Cuban oil refineries without compensation. Cuba nationalized the refineries following Eisenhower‘s decision to cancel 700,000 tons of sugar imports from Cuba to the U.S.[1] and refused to export oil to the island, leaving it reliant on Russian crude oil. All American oil companies refused to refine Russian oil, leading the Cuban government to nationalize the refineries.[2][3] On 7 February 1962 the embargo was extended to include almost all imports.

Currently, the Cuban embargo is enforced mainly through six statutes: the Trading with the Enemy Act of 1917, the Foreign Assistance Act of 1961, the Cuban Assets Control Regulations of 1963, the Cuban Democracy Act of 1992, the Helms–Burton Act of 1996, and the Trade Sanctions Reform and Export Enhancement Act of 2000.[5] The stated purpose of the Cuban Democracy Act of 1992 is to maintain sanctions on Cuba so long as the Cuban government refuses to move toward “democratization and greater respect for human rights”.[6] The Helms–Burton Act further restricted United States citizens from doing business in or with Cuba, and mandated restrictions on giving public or private assistance to any successor government in Havana unless and until certain claims against the Cuban government were met. In 1999, President Bill Clinton expanded the trade embargo by also disallowing foreign subsidiaries of U.S. companies to trade with Cuba. In 2000, Clinton authorized the sale of “humanitarian” U.S. products to Cuba.

At present, the embargo, which limits American businesses from conducting business with Cuban interests, is still in effect and is the most enduring trade embargo in modern history. Despite the existence of the embargo, the United States is the fifth largest exporter to Cuba (6.6% of Cuba’s imports are from the US).[15] However, Cuba must pay cash for all imports, as credit is not allowed.[16].

America’s embargo against Cuba affects economic, commercial and financial matters. By US law, it will last as long as the Cuban government refuses to move toward “democratization and human rights,” and yet we have seen that Cuba is far from the worst country with regards to implementing those issues. The US also has financial claims of $6 billion against the Cuban government – a result of the broad nationalization that came with the revolution. Again, Cuba is not the worst such offender (Argentina’s recent default comes to mind). Meanwhile, the UN General Assembly has passed an almost unanimous resolution every year since 1992 condemning the embargo. Most international human rights groups agree and President Obama recently denounced the embargo as well. The embargo is an abomination that cannot be stopped as long as the American Congress refuses to pass a resolution to negate it.

Most things in Cuba are run by the state, but the economy is changing fast; in many aspects, it resembles that of China. While visiting Cuba, I had a lot of conversations with locals about what will happen next. The consensus prediction was that the embargo will be canceled sooner or later.

One of the “educational” components of our trip was a short visit to a small facility that keeps old (pre-revolution) American cars running. We had a nice tour of Havana riding in one of these cars and ending with a chat with the shop’s owner. Our driver spoke fluent English; it turned out that he was an English professor at the university but had quit his job in favor of driving around tourists because the pay was much better. He was not alone in this decision. The university is government run and the tuition is free. That unfortunately means that the academic staff is paid very little. This is true with other professional jobs as well. One of the results has been the relatively large emigration of professionals to richer, more market-oriented countries or, alternatively, to private, service-oriented jobs within Cuba. Such a brain-drain is a big loss for any country but it is not restricted to Cuba. The table in the January 26, 2016 blog shows that the pattern is common to other poor Central American and Caribbean countries.

America had a tight-knit, dominant relationship with Batista’s government, which reigned in the roughly 50 year period between Cuba’s independence and its revolution. Our impression was that the embargo will never succeed in convincing Cuba to willingly revert to something that resembles that arrangement, but market forces will bring about changes to its governance as the economy becomes more and more dependent on a service economy and tourism.

My next few blogs will focus on Cuba’s energy and water issues and the joint interests Cuba and the US have in the very narrow strait of water that separates them.

1 Response to State Destruction and the Cuban Embargo