Driving Forces in the Anthropocene 1 – Education and Transportation

Posted on July 18, 2017 by climatechangefork

As I have often mentioned, I teach two courses: one undergraduate climate change class and a more advanced one about Physics and Society that is open to both undergraduate and graduate students. The latter mainly aims to provide advanced students – especially those who focus on Physics – with broader opportunities in their career choices. My lower level course falls under Brooklyn College’s General Education program. Like all such setups, the school seeks to widen its students’ horizons and facilitate their ability to contribute constructively to a changing society. Both courses mix basic principles of science with current events.

Governance plays a large role in shaping current events and in a democratic society, much of that control is subject to politics. In many countries, including the United States, academics tend to be more liberally inclined than the rest of the general public. This creates a political gap between academics and the government.

One such rift came to light recently in Israel. Naphtali Bennet, the Education Minister and the head of a right-leaning Nationalist party, decided to take action to reduce this divide. His strategy was to issue guidelines for university faculty forbidding any digressions from published syllabi – especially if they regarded politics:

Last December, Bennett asked Asa Kasher, who wrote the IDF’s ethics code, to draw up a document laying down the lines for acceptable behavior by academic lecturers regarding political activism during teaching sessions. Kasher recently presented the code to Bennett and the latter now plans to submit it for approval by the Council for Higher Education in Israel, the national governing body for academic institutes, according to a Friday report in the Yedioth Ahronoth daily.

Although the code is not directed at any particular political orientation, Israeli academia is often seen as left-leaning. Bennett, head of the religious-nationalist Jewish Home party, has been seen as attempting to limit left-wing voices in educational institutions while bringing in more views from the right.

While all of the academic institutions in Israel object to the law, they lack the voting power to prevent it from passing. Topics such as mine will be unteachable in such an environment.

Right now, our energy use (and the production of such energy) is most likely the largest impact that humans are making on the physical environment. The brunt of this comes from the corresponding changes in the chemistry of the atmosphere, which in turn affect our planet’s energy balance with the sun and therefore the global climate. We have extrapolated that these changes – based on business as usual practices – over just a few generational lifetimes, will destroy the planet’s ability to support life. That relatively short timespan is barely enough time to reverse these practices. The world is now in the process of trying to actively slow or mitigate climate change but the current administration is forcefully pulling the US out of this effort. The educational system is feeling the pull between the two directions, as is the political arena.

Some of the main driving forces that power the changes in the atmospheric chemistry are summarized through the IPAT identity. The IPAT identity contains two basic socioeconomic indicators – population and standard of living, and three energy terms that specify the yearly carbon emissions that result from energy use. Traditionally, the electricity generation sector is the dominant carbon emitter, followed by the transportation sector. Figure 1 demonstrates typical global carbon dioxide emissions by sector. Figures of this sort vary because of different sector accounting (e.g. power generated on site is often associated with industry or residential sectors). 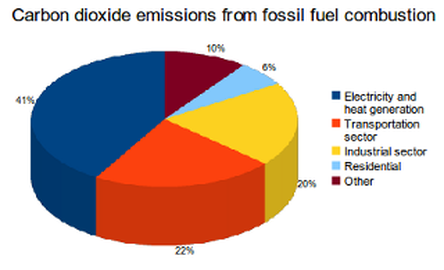 There is a major new shift taking place within such sector distributions. Rather suddenly, carbon emissions from transportation are starting to compete for impact with those that result from generation of electricity. The shift starts in developed countries, with a strong indication that it is expanding to developing countries as they get richer. Figure 2 demonstrates the change in the US. As we will see below, markets are responding quickly to accommodate. 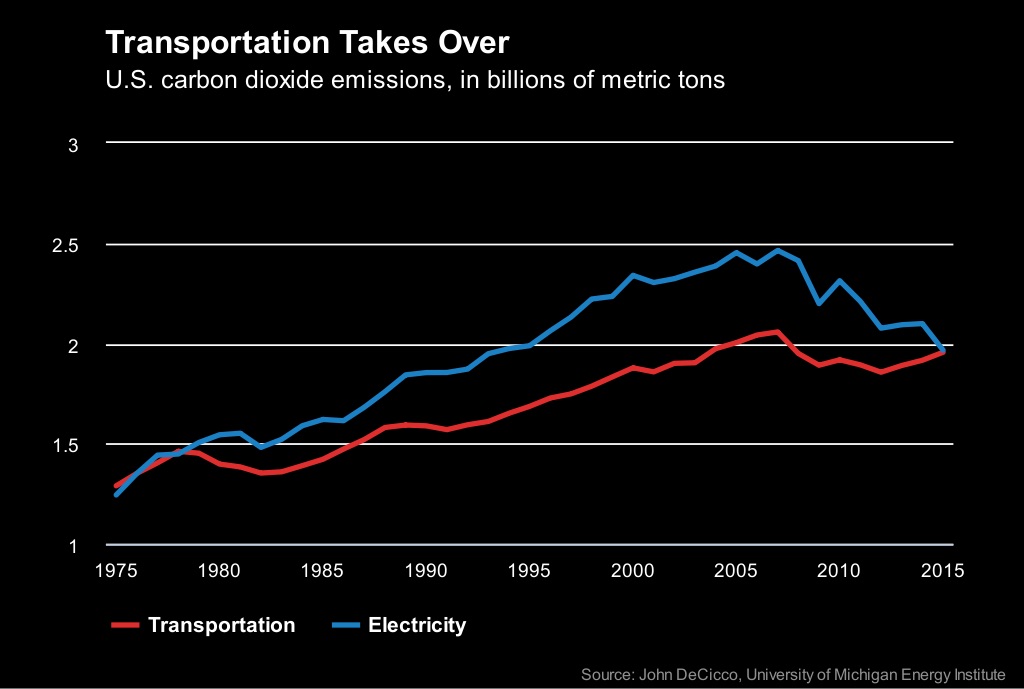 Figure 2 – Carbon dioxide emission in the US resulting from energy use that drives electricity production and transportation.

Recently the valuation of Tesla Motors ($51.4B) overtook that of the 109-year-old company General Motors, in spite of the fact that the latter has yearly sales of more than 100 times that of the former. Tesla is developing and selling electric cars, one of the main selling points for which is that they are the future of motor vehicles because they don’t burn carbon fuel and thus don’t pollute the air. Of course, electric cars get their energy from the electric grids. The sales pitch doesn’t include the obvious detail that if said electric power is being generated using coal plants, the electric cars are far from being environmentally benign. As a matter of fact, they might be more polluting than their fossil fuel counterparts. Yet the attraction of electric cars is not confined to the US. Here is a Reuter’s story about the global trend:

Demand for gasoline in Asia may peak much earlier than expected as millions of people in China and India buy electric vehicles over the next decade, threatening wrenching change for the oil industry, oil and auto company executives warned.

They said refiners should prepare for a future in which gasoline, their biggest source of revenue, will be much less of a cash cow.

Change is being prompted by policy moves in India and China, where governments are trying to rein in rampant pollution, cut oil imports, and compete for a slice of the fast-growing green car market.

In its “road map”, released in April, China said it wants alternative fuel vehicles to account for at least one-fifth of the 35 million annual vehicle sales projected by 2025.

India is considering even more radical action, with an influential government think-tank drafting plans in support of electrifying all vehicles in the country by 2032, according to government and industry sources interviewed by Reuters late last week.

“We will see a clear shift to electric cars. It’s driven by legislation so electric cars are coming, it’s not a niche anymore,” Wilco Stark, vice president for strategy and product planning at German car maker Daimler (DAIGn.DE), told Reuters.

In the next blog I will try to correlate this shift in energy use with a shift in socioeconomic class – the world is getting richer and the global middle class is exploding the use of cars, trains and airplanes.

Micha Tomkiewicz, Ph.D., is a professor of physics in the Department of Physics, Brooklyn College, the City University of New York. He is also a professor of physics and chemistry in the School for Graduate Studies of the City University of New York. In addition, he is the founding-director of the Environmental Studies Program at Brooklyn College as well as director of the Electrochemistry Institute at that same institution.
View all posts by climatechangefork →
This entry was posted in Anthropocene, Anthropogenic, Climate Change, Sustainability and tagged Adaptation, China, Clean Energy, Climate Change, Climate Change Denial, Climate Change Deniers, Climate Skeptics, CO2 emissions, Donald Trump, Economics, Education, Electricity, Emissions, Energy, energy transition, Environment, Fossil Fuels, Global Warming, greenhouse gas, Mitigation, Physics, Power, Power Plants, Science, Solar Energy, Sustainability, Technology, Trump, US. Bookmark the permalink.