Posted on July 25, 2017 by climatechangefork

The global shift that I talked about last week – from electricity to transportation as the biggest contributor to carbon emissions – is complicated. It has to do with the increased demand for transportation (mainly fueled by gasoline) within developing countries just as much of the electricity production is shifting from coal to natural gas and correspondingly reducing carbon emissions. The indicator that plays a fundamental role in both phenomena is the recent swell in both the size and consumption of the global middle class.

The two most recent Global Trends reports issued by the American intelligence community touched on that marker. The Global Trends – 2030 report discussed it in “Megatrend 1: Individual Empowerment”

Middle classes most everywhere in the developing world are poised to expand substantially in terms of both absolute numbers and the percentage of the population that can claim middle class status during the next 15-20 years. Here is how Global Trends defines the middle class:

I observed the rapid shift to automobile use in urban China and described some of the consequences in two previous blogs, “China – How Many Cars Can a City Handle” and “Cars in China – Cap and Pay.” Many of the largest Chinese cities now have so many cars that they are approaching their estimated “saturation ranges.” This is an immense contrast with what I observed in China on my previous visit in 1995, when the predominant mode of urban transport was bicycles.

The world electrification for a similar period of time is shown in Figure 2 (the actual data in Figures 1 and 2 are similar; the time period between 2015 and 2050 in Figure 1 are extrapolated data). Global availability of electricity as a share of global population has expanded by 10% according to the Energy Information Administration (EIA).

Below is the EIA explanation of the reasons for the expansion of access of electricity:

Figure 3 quantifies the split between rural and urban gains in access to electricity. 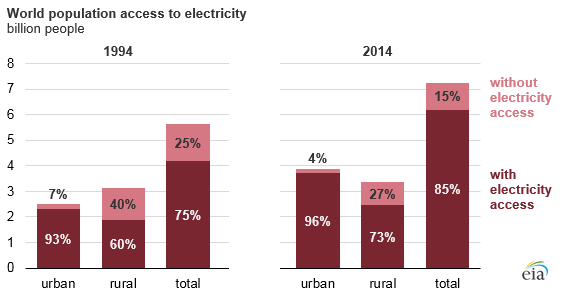 By 1994, the urban areas throughout the world were already close to fully electrified. What happened afterward was a massive migration from the rural areas to the urban ones. As we’ve discussed repeatedly, the middle class is moving to the cities on a global basis, in both developed and developing countries. The planet is becoming more and more urbanized, with major political consequences and related environmental impacts. Most of the people that move do so to find work in the cities, hoping to escape poverty and rise to the middle class. Since the cities are already hooked up to power, they are more or less able to accommodate this massive migration. The use of electricity is increasing much slower as a result of the newly urbanized population. Other elements are starting to play major role. The residents of these booming cities are starting to demand clean air on par with international standards. These demands for cleaner city air are forcing governments to switch fuels in nearby power stations from coal to the cleaner options of natural gas and sustainable energy sources. These shifts result in much slower increase in carbon emission.