Posted on September 26, 2017 by climatechangefork 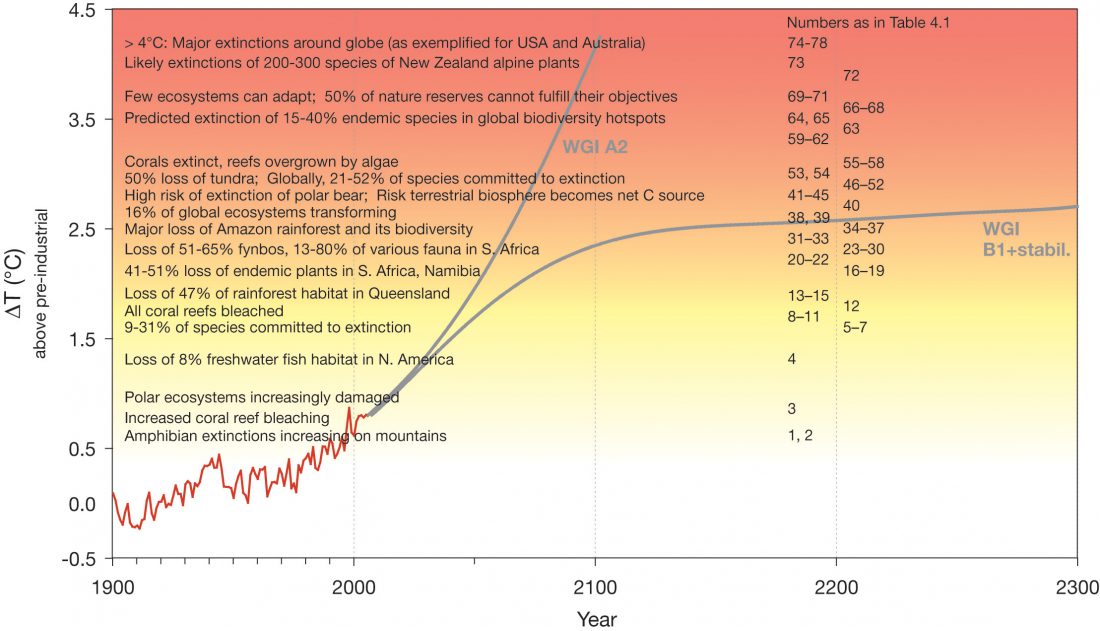 Trying to estimate the timing of doomsday is not a very honorable activity. Doomsday theorists abound and they don’t enjoy a great reputation for accuracy. Here’s a historical list of such apocalyptic predictions.

I feel more comfortable, substituting doomsday with the phrase 6th Mass Extinction – as used in the PNAS article that I described last week – or “self-inflicted genocide,” a term I have used repeatedly here, even though that relabeling might be considered a matter of semantics. By using these terms, scientists are less afraid of being labeled as false prophets; we consider some of the societal and political activities happening now as existential threats, greatly heightening the feasibility of doomsday scenarios.

I have used Figures 1 and 2 from the IPCC report on various occasions throughout this blog (the earliest being December 10, 2012). The WG1 scenario’s sharp climb into the dark orange zone demonstrates our rocketing towards doomsday, an existential danger that needs to be halted immediately. Reaching this situation by the end of the century in a business-as-usual scenario seems reasonable. Such a sharp marker doesn’t exist in Figure 2, which expresses the future in terms of carbon accumulation in the atmosphere. Daniel Rothman from MIT just put out a paper that works to close that gap, analyzing changes in the carbon cycle that have triggered all the recorded mass extinctions over the last 500 million years (Daniel H. Rothman. “Thresholds of catastrophe in the Earth system,” Science Advances, 2017):

Thresholds of catastrophe in the Earth system

The history of the Earth system is a story of change. Some changes are gradual and benign, but others, especially those associated with catastrophic mass extinction, are relatively abrupt and destructive. What sets one group apart from the other? Here, I hypothesize that perturbations of Earth’s carbon cycle lead to mass extinction if they exceed either a critical rate at long time scales or a critical size at short time scales. By analyzing 31 carbon isotopic events during the past 542 million years, I identify the critical rate with a limit imposed by mass conservation. Identification of the crossover time scale separating fast from slow events then yields the critical size. The modern critical size for the marine carbon cycle is roughly similar to the mass of carbon that human activities will likely have added to the oceans by the year 2100.

The threshold seems to be the same. Last week, a paper in Nature Geoscience (September 18, 2017) called into question some of the IPCC’s carbon dioxide estimates (GtC = gigatons of carbon = billion tons of carbon):

Emission budgets and pathways consistent with limiting warming to 1.5 °C

The Paris Agreement has opened debate on whether limiting warming to 1.5 °C is compatible with current emission pledges and warming of about 0.9 °C from the mid-nineteenth century to the present decade. We show that limiting cumulative post-2015 CO2 emissions to about 200 GtC would limit post-2015 warming to less than 0.6 °C in 66% of Earth system model members of the CMIP5 ensemble with no mitigation of other climate drivers, increasing to 240 GtC with ambitious non-CO2 mitigation. We combine a simple climate–carbon-cycle model with estimated ranges for key climate system properties from the IPCC Fifth Assessment Report. Assuming emissions peak and decline to below current levels by 2030, and continue thereafter on a much steeper decline, which would be historically unprecedented but consistent with a standard ambitious mitigation scenario (RCP2.6), results in a likely range of peak warming of 1.2–2.0 °C above the mid-nineteenth century. If CO2 emissions are continuously adjusted over time to limit 2100 warming to 1.5 °C, with ambitious non-CO2 mitigation, net future cumulative CO2 emissions are unlikely to prove less than 250 GtC and unlikely greater than 540 GtC. Hence, limiting warming to 1.5 °C is not yet a geophysical impossibility, but is likely to require delivery on strengthened pledges for 2030 followed by challengingly deep and rapid mitigation. Strengthening near-term emissions reductions would hedge against a high climate response or subsequent reduction rates proving economically, technically or politically unfeasible.

The paper’s outlook on carbon dioxide emissions is a bit more optimistic than that of the IPCC but it still requires humanity to go zero carbon well before the end of the century in order to prevent doomsday.

Judging by recent developments, the US is not only aiming to double down on business-as-usual scenarios for greenhouse gas emissions, we are actively trying to reverse previous attempts to mitigate the coming disaster. Here are some recent examples:

Data-tracking watchdog group, Environmental Data & Governance Initiative (EDGI), has reported dozens of instances where the National Institute of Environmental Health Sciences has deleted references to climate change from its site

This week saw the long-delayed release of the Department of Energy’s evaluation of grid stability. The report was commissioned by Energy Secretary Rick Perry, who suggested that the expansion of renewable energy was undermining the reliability of electricity delivery. Back in June, however, a draft of the expert evaluation leaked, and it stated that the US grid was now more reliable than it had been in recent decades. Those conclusions, however, were watered down in the final report.

But the report is also notable for avoiding the use of the term “climate change” anywhere in its 125 pages. This is despite the fact that increased heat will boost demand and stress grid hardware and that climate change is currently driving state-level energy policies. In fact, the report recommends the anti-solution of increasing the use of coal-fired power plants.

For years, climate change activists have faced a wrenching dilemma: how to persuade people to care about a grave but seemingly far-off problem and win their support for policies that might pinch them immediately in utility bills and at the pump.

But that calculus may be changing at a time when climatic chaos feels like a daily event rather than an airy abstraction, and storms powered by warming ocean waters wreak havoc on the mainland United States. Americans have spent weeks riveted by television footage of wrecked neighborhoods, displaced families, flattened Caribbean islands and submerged cities from Houston to Jacksonville.

Doomsday timing doesn’t have to be global. We can see different markers of individual cataclysms around the world and how they trigger even bigger problems. The necessary massive movement of people from more vulnerable locations to less vulnerable ones creates its own set of issues that we are just now starting to encounter. In future blogs I will try to quantify some of these prospects within a few local communities.

Next week I will return to how and why we attribute climate change to human activities. I’ll examine how we try to determine the human contributions to each of these early markers of the 6th Mass Extinction. I will try to address this both globally and locally, followed by identifying tools that we already have that can minimize these catastrophic impacts – if we have the will to do so.