Markers for the Global Energy Transition

Posted on February 20, 2018 by climatechangefork

Last week I talked about Dieter Helm’s book, where he portrayed a future in which oil companies are going broke and fossil fuel prices are collapsing due to their practically infinite supply (via fracking and horizontal drilling). Growing awareness of climate change has led to strong public pressure to reduce our carbon footprints and we are experiencing major shifts in how we source and use energy. This includes the growing conversion to electric power. The energy industry was (and is still) structured to accommodate the now-outdated perception that energy supply is finite and shrinking and electrical distribution continues to rely on archaic structures. Helm presents a rosy future for the US because we can adapt to this post-peak-oil reality. But his prediction does not factor in our election of President Trump, who is bent on returning us to the yester-world in terms of our treatment of the physical environment.

As I mentioned in last week’s blog, I agree with some of Helm’s observations and disagree with others. I do feel, however, that it is easy to make predictions about a far future that many of us will not live to see (nor will we be held accountable for our predictions). Helm’s book suffers from that sort of glib certainty and I am aware that I have to some extent shared in the same practice throughout the five years I have been writing this blog.

Helm’s book triggered in me a strong desire to change my ways so I will be starting a series about the recent past. My jumping-off point is the IPAT identity that I have repeatedly referenced here (the first reference was from November 26, 2012). Below is a much more recent mention of this important identity:

What I referred to in that blog as Figure 2 I am reposting here as Figure 1.

In past blogs I referred to the various indicators in the identity in global terms. Here, and in the next few blogs I will instead cite individual countries. There are two main reasons for doing so. First, our global system is made up of sovereign countries, each of which can (for the most part) enforce actions only within its own borders. The second reason is that once I focus on individual countries I can emphasize those that are more/less successful at transitioning their energy away from carbon-based sources.

The sum total of the current population of the 10 most populous countries amounts to more than half of the global total so it is a fair indicator of the whole number. 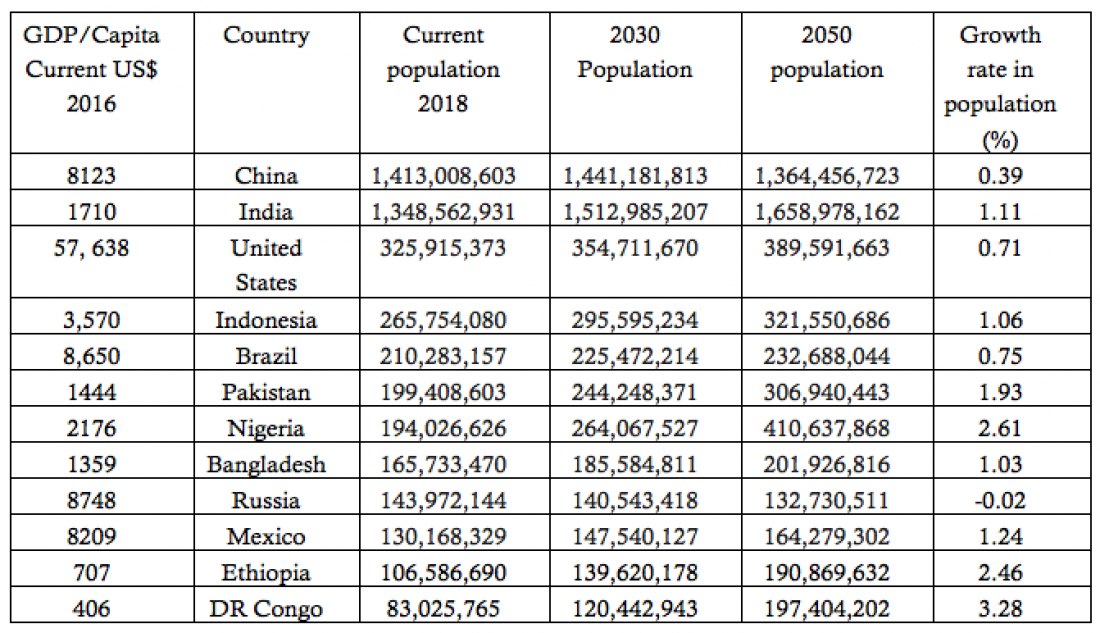 I have added Ethiopia and the Democratic Republic of Congo because the UN is projecting that given their current growth rates they will be among the 10 most populous countries by 2050. According to World Bank classification, this table includes one high-income (the US), three low-income (Bangladesh, Ethiopia, and DR Congo), four lower-middle income (India, Indonesia, Pakistan, and Nigeria) and four upper-middle income economies (China, Brazil, Russia, and Mexico). In other words, it represents the full range of global income distribution.

The table includes each of the twelve countries’ current GDP/Capita, growth rate, and population as well as their projected populations for 2030 and 2050.

Next week I will focus on trends in primary energy use, emphasizing alternative energy and the resulting change in carbon footprints that these newly diversified economies generate. I will follow it with a compilation of electricity use and the drivers being used to collect the electricity.

2 Responses to Markers for the Global Energy Transition