Posted on May 8, 2018 by climatechangefork

Rafik, a young, dear, French relative of mine, was born in Algeria. He still has family there that he visits often, occasionally going with some of them to tour the Sahara desert. We discussed his trips and the history of the Sahara desert; his stories fit nicely with the topic of desertification, one of the biggest vulnerabilities of climate change (April 24, 2018 blog). I was just starting to write about the topic, planning to include some of Rafik’s photographs, when my wife showed up with a short piece from the science section of The New York Times: “Fellow Travelers in Eco-Suicide.” It caught my imagination. When I visited the online version of the NYT, I found the article with a different title: “A Population That Pollutes Itself into Extinction (and It’s Not Us).” This change was sufficiently intriguing to motivate me to search for the original paper it described: “Ecological Suicide in Microbes.” The public response was widespread and immediate (as judged by Google’s response to the article’s title). People seemed to recognize the connection between this bacterial suicidal activity and the end result of humans ignoring the long-term consequences of climate change. I have long labeled climate change as self-inflicted genocide (see the November 15, 2016 blog). There is, however, a major difference between bacteria and us. Merriam Webster dictionary defines genocide as, “the deliberate and systematic destruction of a racial, political or cultural group.” The key word here is deliberate. One cannot be deliberate without a brain, and bacteria don’t have them. The same problem applies to the term suicidal in the other two titles.

Before proceeding, let’s get some details of the story from the abstract of the original paper that was published in Nature Ecology & Evolution (2018 May; 2(5): 867-872) by Christoph Ratzke, Jonas Denk and Jeff Gore. It is worth mentioning that all three authors are in physics departments: Ratzke and Gore at MIT in the US and Denk in Germany.

The growth and survival of organisms often depend on interactions between them. In many cases, these interactions are positive and caused by a cooperative modification of the environment. Examples are the cooperative breakdown of complex nutrients in microbes or the construction of elaborate architectures in social insects, in which the individual profits from the collective actions of her peers. However, organisms can similarly display negative interactions by changing the environment in ways that are detrimental for them, for example by resource depletion or the production of toxic byproducts. Here we find an extreme type of negative interactions, in which Paenibacillus sp. bacteria modify the environmental pH to such a degree that it leads to a rapid extinction of the whole population, a phenomenon that we call ecological suicide. Modification of the pH is more pronounced at higher population densities, and thus ecological suicide is more likely to occur with increasing bacterial density. Correspondingly, promoting bacterial growth can drive populations extinct whereas inhibiting bacterial growth by the addition of harmful substances—such as antibiotics—can rescue them. Moreover, ecological suicide can cause oscillatory dynamics, even in single-species populations. We found ecological suicide in a wide variety of microbes, suggesting that it could have an important role in microbial ecology and evolution.

The essence of the bacterial suicidal behavior (of which said bacteria is probably unaware) is a lack of ability to dispose of their waste within a relatively small enclosure. To take the human analogy further, Figure 1 shows the global extent of basic sanitation facility usage. 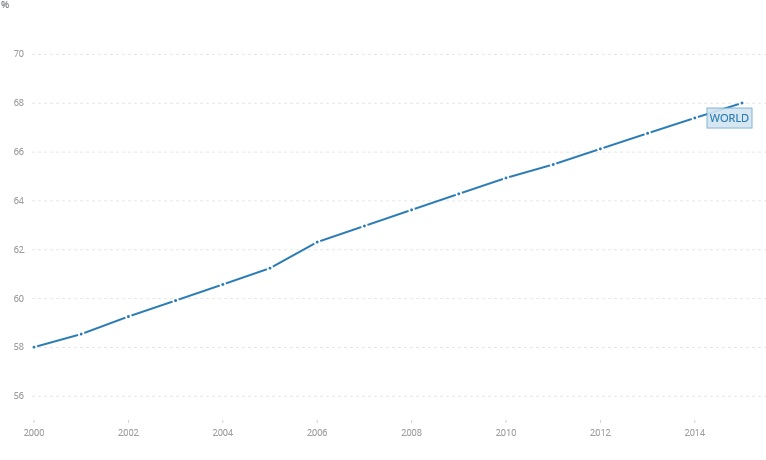 The World Bank defines the indicator as follows:

Not too long ago, humans didn’t use any sanitation facilities. But at that point, human density was low enough that we could move across the land and let nature apply the old dictum, “dilution is a solution.” The bacteria in the MIT-German study didn’t have that option. The bacteria’s waste consisted of various organic acids (developed from the metabolization of the glucose supplied as the source of nutrition). The organic acids produced changed the pH of the medium to values that inhibited digestion and eventually led to collective bacterial death. When the experimenters included a buffer into the medium that was able to keep the pH approximately constant, the bacteria did fine.

We can drive the analogy even further: about 25% of the carbon dioxide that is produced by our consumption of fossil fuels ends up dissolved into our oceans, thus changing the oceans’ pH to more acidic values which in turn inhibit almost all life forms. Since the oceans are so large, complete collective death will take some time.

The untreated waste that humans excrete becomes a poison, just as we saw with the bacteria. We need to improve digestion/processing mechanisms (in the same way that the experimenters added the buffer) to neutralize the problem and increase our chances of survival. (See “Tragedy of the Commons” July 2, 2012 blog).

While the paper itself is only five pages long (including a full page of references), there is a separately published online supplement that spans 25 pages. The supplement includes a suggested outline for a mathematical approach to facing ecological suicide that might be applicable to many other situations. The approach is based on logistic growth (February 4, 2014), which leads to saturation in concentration (carrying capacity). In this case, the saturation level changes with the waste concentration that manifests itself in terms of change in the pH of the medium. This is probably one of the first quantitative analyses of the collective suicide of a living system.

Both titles – that of the important Ratzke paper just published in Nature and the one heading this blog – falsely invoke commonality between humans and life forms that lack, functioning, thinking brains. The tragedy is that even with the advantage of our thinking power, we are in a similar situation to Paenibacillus sp. bacteria.

Stay tuned for next week’s examination of desertification.