Posted on September 25, 2018 by climatechangefork 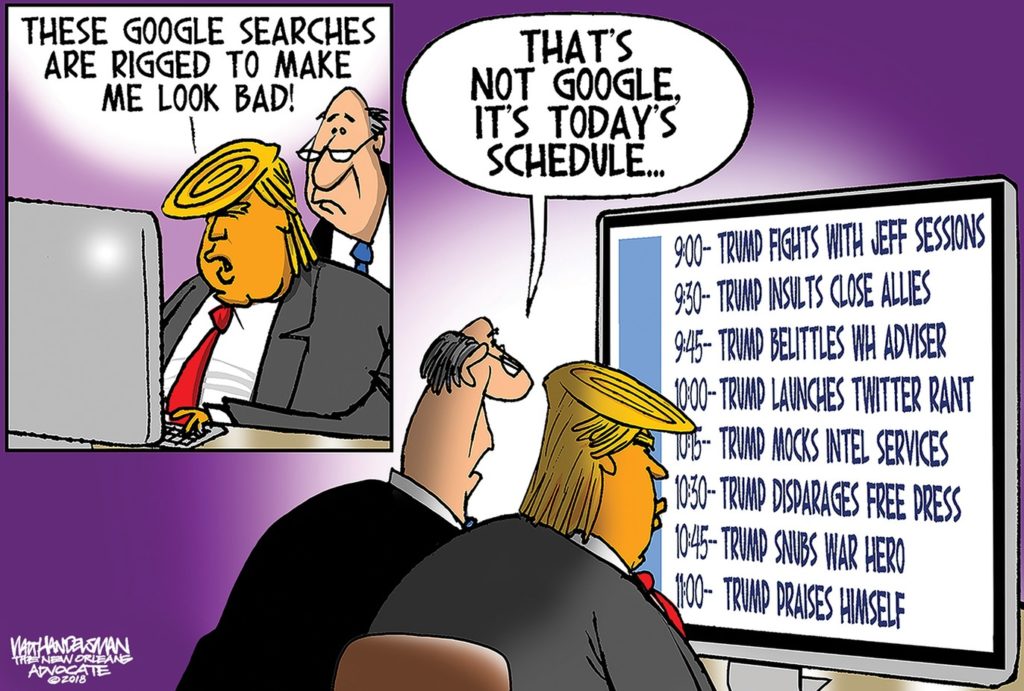 My original plan for this week was to focus on President Trump’s complaints that Google’s search engines are biased against him, and his demand that the Justice Department investigate. I found a fitting cartoon by Walt Handelsman. The Justice Department is already following his wishes, conducting anti-trust investigations of Google and Facebook. I don’t know of anyone raising the issue of the First Amendment here, or to what extent it would apply to the issue at hand. But the next step being threatened is to investigate schools for biased teaching. This could easily result in the elimination of any traces of current events from the curriculum, leaving students completely unprepared for the reality that they will face once asked to think for themselves.

Speaking of bias and balance, I came across a new paper published in PNAS (Proceedings of the National Academy of Sciences) written by three sociologists (Douglas Guilbeault, Joshua Becker, and Damon Centola): “Social learning and partisan bias in the interpretation of climate trends.” The paper provides data to show that exposure to social media is effective in eliminating bias in the interpretation of climate change, although it warns that, “social learning can be reduced, and belief polarization maintained, as a result of partisan priming.” I wanted to look into why social media doesn’t seem to be protected by the First Amendment even if it is not “balanced.”

As I was working on writing about that, two new issues surfaced: one had to do with the confirmation of Judge Brett Kavanaugh to the Supreme Court; the other, which got far less attention, was a story about climate change from Fox News. My interest in the Fox News piece is consistent with the focus of this blog and I will expand upon it in a minute. My focus on the Kavanaugh confirmation is less obvious. So let me start with this:

For those of you who live on a different planet (or just under a rock) and don’t know what I am talking about, I am including two short blurbs from the Economist’s Espresso from Friday, September 21st to give you some background:

Family matters: Value Voters Summit
Today the annual gathering of social conservatives kicks off in Washington, DC. The movement has a curious and fervid attachment to President Donald Trump—who, as a thrice-married man who just had his anatomical peculiarities revealed by a porn actress, is not a poster child for family values. But Value Voter Christians, who once believed in a vindictive Old Testament God, discovered the redemption of sinners when Donald Trump came along. In 2011 only 30% of white evangelicals thought an immoral man could be a virtuous elected official; on the eve of Mr Trump’s election, 72% did. Their professed rationale is simple: to fill the Supreme Court with conservatives who would overturn Roe v Wade , the 1973 decision granting abortion rights. Like Mr Trump, the Republicans’ Supreme Court nominee, Brett Kavanaugh, stands accused of sexual assault (which he denies). His accuser could soon testify, but expect social conservatives to overlook whatever trespass may emerge.

Christine Blasey Ford’s lawyer said she cannot testify about Brett Kavanaugh by Monday, the date set by Republican senators, but she would next week under terms “which ensure her safety”. Ms Blasey says Donald Trump’s nominee to America’s Supreme Court sexually assaulted her in 1982. She has asked for an FBI investigation, which Republicans oppose. Mr Kavanaugh denies the allegations.

Two things from above pain me given my desire for rationality in my political system and – perhaps naively, my fellow Americans:

The first one is the Evangelical voter bloc’s desire to confirm Judge Kavanaugh regardless of what he did to Dr. Ford when he was 17 and she was 15. They desperately want him to overturn Roe v. Wade, which makes abortion legal throughout the US, and they are willing to compromise on other moral issues along the way. What is not obvious from the Espresso piece but was published by other papers was that these same Evangelicals are threatening to abstain en mass from the November election if the confirmation does not go through. This sounds to me like shooting yourself in the foot. If they do so, there is a much better chance that control of the Senate will shift to Democrats, who are unlikely to approve any Supreme Court candidate that would put Roe v. Wade in danger.

The second aspect of this that insults both my senses of rationality and justice has to do with Dr. Ford’s insistence upon an objective investigation of her claim of attempted rape. This has less to do with her quite understandable demand and much more to do with due process. Without such an investigation, the two testimonies (hers and that of Judge Kavanaugh) become a “he said, she said” issue (he completely denies the charge) and the confirmation vote becomes an apparent verdict of the matter that holds the potential to ruin the life of the “loser.” The lack of such an investigation leaves us with no mechanism to separate the facts from the politics. Both are legitimate considerations here but there’s no doubt that they need to be separated.

Meanwhile, I was busy this week following climate change-related developments. The climate change issues that dominated the headlines were the aftermath of Florence and new estimates for sea level rise. The latter specifically focused on attempts to understand the mechanisms of the ice melting in Greenland and Antarctica and their direct global impacts on sea level. On Saturday, September 22nd, this emphasis peaked with proposals to build big walls to isolate the Polar Regions from the rest of the ocean. I also read a great Reuters piece that thoroughly explained NASA’s efforts to understand the various mechanisms that contribute to the accelerated melting of the Greenland ice cover – the second largest ground-based global ice cover (after Antarctica). This report had access to the as yet unpublished new IPCC report that is scheduled to come out in September 2019. The piece is so detailed and consequential that I immediately added it to the list of required reading for my climate change class. I will come back to it in future blogs. Here I want to focus on a different but related piece – one that shocked me and perhaps did the same for others:

An enormous ice sheet is at risk of melting even if temperatures rise by just 2°C, potentially sparking major climate chaos. Scientists say that if the East Antarctic Ice Sheet –which is 60 times the size of England – melts, sea levels could rise by four meters, putting areas of the UK at risk of disappearing entirely. Melting ice can have a devastating effect on the world, causing the planet to heat up more quickly, changing ocean circulation systems that regulate global weather, and increasing the risk of flooding and tsunamis damage.

A study into historical ice loss suggests even “moderate warming” of Earth could melt the East Antarctic Ice Sheet. Now a study in Nature suggests that 2°C of warming over “a couple of millennia” could cause significant melting of the EAIS. “Antarctica is around twice the size of Australia, with ice sheets several kilometers thick and containing around half of the world’s fresh water,” said Dr Kevin Welsh, at the University of Queensland, a co-author on the study. “The East Antarctic Ice Sheet covers about two thirds of the area, and because its base is largely above sea level it was generally thought to be less sensitive to warming climates than the adjacent West Antarctic Ice Sheet. “However, some areas – like the Wilkes Land Subglacial Basin, directly south of Australia – are below sea level and contain enough ice to raise global sea levels by several meters.       “The evidence we have suggests that with the predicted 2°C warming in Antarctica – if sustained over a couple of millennia – the sheet would start melting in these locations.”

I am not a dedicated viewer or reader of Fox News. It is, in my view and that of many others, the mouthpiece of climate deniers. But President Trump and his administration are avid fans so there is a chance that they might have read this piece and started thinking, “My God – this is happening on our watch – shouldn’t we do something about it?” Maybe it’s wishful thinking but the possibility is there. I already know that the lines between publications – and therefore their values – are blurring because I am a subscriber to National Geographic, which is now owned partially by 21st Century Fox – a huge company controlled by Fox News’ Rupert Murdoch. But the nature of National Geographic has not shifted with its change in ownership. As these lines blur, it is becoming more and more difficult to identify trustworthy sources. In order to believe, we need to investigate – and top-down investigations (such as Senate committees) are not always much help. If we can’t trust anyone else, we need to be comfortable with conducting our own investigations. To be able to do that we have to follow the issues closely.