Posted on June 25, 2019 by climatechangefork

Wherever you live or work there is a very good chance that you are subject to multiple jurisdictions , with laws that you have to abide by. In my case, those include New York City and State, and the US federal government. In addition, I live in an apartment building that has its own rules and regulations, as does the university where I teach. It is not surprising that—by now—all these jurisdictions have policies, rules, and laws that were drafted to address climate change. Starting with the May 28th blog, with one exception (The June 11th blog that focused on D-Day), I have tried to cover my campus’ efforts to place itself in a leadership position in this area. I have described the commitments that Brooklyn College made in 2009, as well as New York City’s recent detailed legislation.

New York State’s work on the issue was invisible until now. On June 20th (last Thursday), this situation changed. Reuters and other publications announced that both chambers of the New York legislation came out with major legislation that put NY at the forefront of global efforts to mitigate climate change through major changes in energy use.

The figure below, taken from the Energy Information Administration (EIA), shows that in the United States, NY State is second only to Washington, D.C. in emitting the least carbon dioxide per person. The main reason is that close to 50% of the state’s residents live in NYC—the largest urban area in the United States—with widely used public transportation, multi-tenant housing, and an economy dominated by non-polluting service economies such as finance. 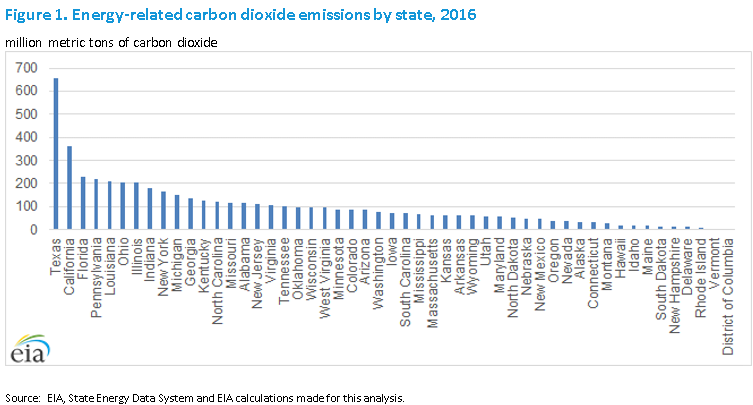 Nevertheless, in view of the passive position that the US federal government is now taking on the issue, NY State, together with other local governments, decided to take the lead. Below are selected paragraphs from the Reuters publication that describes the new legislation:

NEW YORK (Reuters) – New York state lawmakers passed early Thursday one of the nation’s most ambitious plans to slow climate change by reducing greenhouse gas emissions to zero by 2050. If signed into law, it would make New York the second U.S. state to aim for a carbon-neutral economy, following an executive order signed by then California Governor Jerry Brown last year to make that state carbon neutral by 2045.

The marathon session stretched past 2 a.m. Thursday before the votes were tallied with 104 in favor to 35 against. The New York Assembly’s vote in the state capital Albany followed a Senate vote that passed the measure on Tuesday.

It mandates reducing emissions by 85% from 1990 levels by 2050, and offsetting the remaining 15%, making the state carbon neutral.

New York’s “Climate and Community Protection Act” calls for reducing emissions by 40% by 2030 and using only carbon-free sources such as solar and wind to generate electricity by 2040.

“New York is mostly purchasing fossil fuel products out of state,” she said. “So when we transition to a renewable economy we will be spending New York dollars in New York, creating good local jobs that pay well and are meant to be accessible to women, communities of color, low-income communities.”

I looked into the original legislation and managed to find a detailed summary. It is very complex. One of the reasons for that complexity is that many legislators now insist upon inclusion of socioeconomic provisions within the objectives of new legislature. I will quote one paragraph that directly relates to the main objective, as Reuters reported it:

36   1. No later than six months after the effective date of this article,

37 the department shall determine what the statewide greenhouse gas emis-

38 sions level was in 1990, and, pursuant to rules and regulations promul-

39 gated after at least one public hearing, establish a statewide green-

40 house gas emissions limit as a percentage of 1990 emissions, for the

49   2. In order to ensure the most accurate determination feasible, the

51 and economic information on greenhouse gas emissions and consult with

52 the council, stakeholders, and the public in order to ensure that all

53 emissions are accurately reflected in its determination of 1990 emis-

The plan would phase out gasoline-powered cars

The measure does not envision a day when individual car owners will be required to turn in their old vehicles, proponents say. Rather, new regulations would force automakers to accelerate the trend toward producing more and cheaper electric vehicles.

Now, electric car ownership is almost exclusively for single-family homeowners who can plug in cars at home. Charging stations would be needed, for instance, all over New York City, which plans to experiment with putting plugs on existing streetlamps. Customers would plug in cords with built-in meters to charge them for the power.

It would mean no oil- and gas-burning heaters and boilers

“The furnace in an average New Yorker’s home will no longer be fossil fuel fired,” said Peter Iwanowicz, the executive director of Environmental Advocates, a lobbying group. “It will probably be electric.”

The transformation would most likely start with regulations on new construction, backed by incentives for homeowners and landlords to retrofit existing heating systems, experts said.

The easiest way to abide by the new guidelines would be to convert as many energy activities as possible to be electrically powered (such as heating, hot water, electric cars, etc.). However, as I mentioned earlier this year in the context of electric cars (March 12 – April 2, 2019), energy-wise that is not the most efficient way to go through the transition. It also requires that the entire power industry reach carbon neutrality at the same time.

Almost as soon as it was announced, people objected to this new piece of state legislation. The main objection is also the most obvious one — who will pay for all of this? The politically easy answer is that businesses will pay. However, many businesses have warned that they will simply move to another state to avoid stricter policies. These kinds of threats are becoming increasingly prevalent as the federal government tries to shift the responsibility back onto states, counties, and cities. It opens new migration mechanisms that could potentially sharpen the divide between blue states that are trying to actively deal with climate change and red states that are passively watching it happen. I will expand on this in future blogs.