Posted on July 2, 2019 by climatechangefork 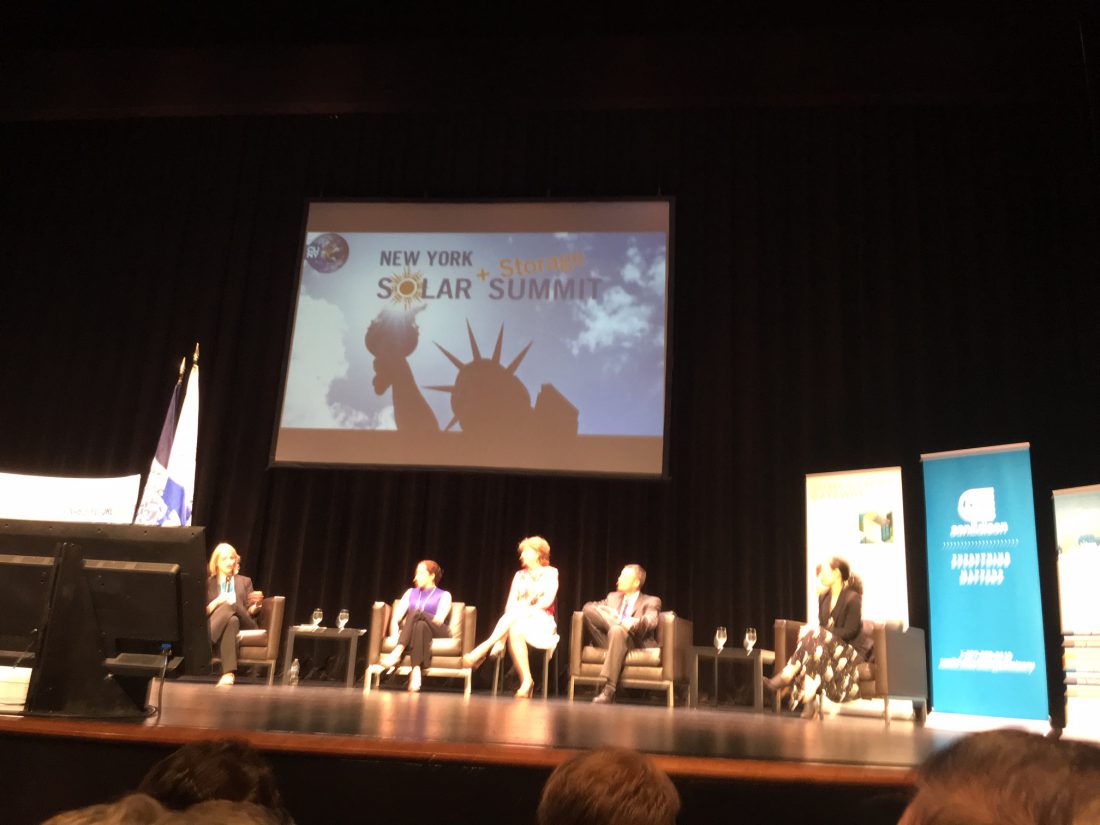 Over the last few years, the City University of New York has organized several Solar + Storage summits focused on local needs and opportunities to accelerate the local energy transition to a carbon neutral economy. This year, the conference was on June 13th at John Jay College. The recent emphasis, both in the City and State of New York (which I described in previous blogs) to accelerate the transition with specific targets for zero net carbon economies, made such a conference especially timely. I decided to attend to try to identify new opportunities—both for learning and for teaching. I was happy that I did.

The rather blurry opening photograph shows the first panel discussion.

Everything that I learned was relevant on the local level, echoing themes that I have emphasized in the previous blogs—namely, that energy transitions can be effective when employed on multiple levels.

The summit included discussions of smart grids; resiliency and grid distribution; power sharing; and CUNY’s own sustainability efforts. As often happens at such conferences, some of the concepts regarding local initiatives, such as microgrids, were ones that I have previously blogged about (April 29, 2014; May 6, 2014; May 27, 2014; and February 24, 2015)—although most of the time I’ve discussed microgrids it’s been in the context of developing countries. Here is how the conference defined them (In these contexts, PV stands for solar photovoltaics):

Electrical systems that can connect and communicate with the utility grid that are also capable of operating independently using their own power generation are considered microgrids. Single buildings or an entire community can be designed to operate as a microgrid. Microgrid infrastructures often provide emergency power to hospitals, shelters or other critical facilities that need to function during an electrical outage. Microgrids can include conventional distributed generators (i.e., diesel or natural gas gensets), combined heat and power (CHP), renewable energy such as PV, energy storage, or a hybrid combination of technologies. If inverters are used, such as for a resilient PV system, they must be able to switch between grid-interactive mode and microgrid (intentional island) mode in order to operate as a microgrid. For large microgrid systems that include distributed energy resources (DER), a supervisory control system (a system that controls many individual controllers) is typically required to communicate with and coordinate both loads and DER.

Other key issues, such as the “DG Hub,” were new to me; I needed some background:

The NY-Solar Smart Distributed Generation (DG) Hub is a comprehensive effort to develop a strategic pathway to a more resilient distributed energy system in New York that is supported by the U.S. Department of Energy and the State of New York. This DG Hub fact sheet provides information to installers, utilities, policy makers, and consumers on software communication requirements and capabilities for solar and storage (i.e. resilient PV) and microgrid systems that are capable of islanding for emergency power and providing on-grid services. For information on other aspects of the distributed generation market, please see the companion DG Hub fact sheets on resilient solar economics, policy, hardware, and a glossary of terms at: www.cuny.edu/DGHub.

I was particularly interested in a joint-published work by NREL (National Renewable Energy Laboratory) and CUNY, which offered a detailed analysis of the effectiveness of solar panel installations in three specific locations in New York. The paper included a quantitative analysis of the installations’ contributions to the resilience of power delivery in these locations. Below is a list of the different models that they have tried to match to the  locations. The emphasis here is on the methodology and what they are trying to do, not on the sites themselves. REopt is a modeling platform to which they try to fit the data:

This report will help managers of city buildings, private building owners and managers, the resilient PV industry, and policymakers to better understand the economic and resiliency benefits of resilient PV. As NYC fortifies its building stock against future storms of increasing severity, resilient PV can play an important role in disaster response and recovery while also supporting city greenhouse gas emission reduction targets and relieving stress to the electric grid from growing power demands.

This analysis used the REopt modeling platform to optimally select and size resilient power options for the sites in the study. Four scenarios were modeled to reflect different priorities and constraints; each scenario was modeled with and without a resiliency revenue stream. The value of resiliency to a site in this analysis is equal to the estimated costs incurred due to grid interruptions. In each case, the resilient PV system was able to capture revenue streams associated with displacing energy purchases from the grid, reducing peak demand charges, and shifting grid-purchased energy from high to low time-of-use cost periods. In all cases, the model found the combination of energy assets that minimized the life cycle cost of energy for the site.

1. Scenario 1: Resilient PV sized for economic savings; no resiliency requirement imposed The model chose from solar and storage resources to size a system that is cost-effective* for the host site.

2. Scenario 2: Resilient PV sized to meet resiliency needs The model chose from solar and storage resources to size a system that supports critical electric loads for short and long outages.

This is a particularly useful experiment that has the potential to accelerate the transition. I will try to find some examples when I visit Germany this summer (see the June 11th blog for more info about where I am going and why). The conference gave me an opportunity to see some initiatives in action in an urban environment and try to participate in the effort.

Next week, I will end this series of blogs on the energy transition in New York/CUNY by focusing on residential buildings and uses of electricity.